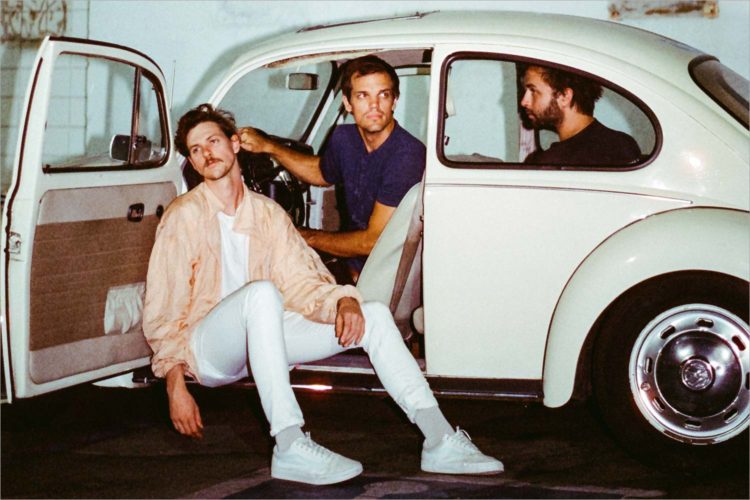 Many bands struggle to find even one single good singer. Houndmouth is lucky enough to have three.

The trio from New Albany, Indiana (near the Kentucky border) has often been compared to The Band — not just for their ragged mix of alt-country and blues, but because everyone in the band can sing and they all do it well.

Guitarist Matt Myers, bassist Zak Appleby and drummer Shane Cody currently share vocal duties, but the band’s two albums — 2013’s From the Hills Below the City and 2015’s Little Neon Limelight — also featured the stellar work of former keyboardist Katie Toupin. Toupin amicably left Houndmouth in 2016 but the remaining members have kept at it, adding saxophones and sharpening their sound.

Houndmouth plays the Majestic Theatre on April 15, and in anticipation I’ve identified the best song for each of the band’s vocalists.

Myers is the closest thing Houndmouth has to a traditional frontman. The lanky guitar wizard is usually the most visible member of the band, handling a good deal of their press. Similarly, he also sings lead on the majority of their songs, making it a little tougher to sort through them for his best performance, but “Penitentiary” is a standout.

Appearing on both their 2012 debut EP and From the Hills Below the City, it’s one of their most Band-esque songs and serves as something a thesis statement on the group. Built around a laid-back guitar line, it features Myers waxing poetic on a life spent on the wrong side of the tracks. Though “Penitentiary” checks off a lot of the hard-living tropes found throughout country music, Myers (who sounds a bit like Ryan Adams and looks a bit like Emile Hirsch) brings some boyish earnestness to lyrics of robbing and stealing generally reserved for dudes far more haggard.

Unlike his more laconic bandmates, Appleby’s vocals ooze exuberance. It’s understandable, then, that many of the group’s rockers are left to the bassist. I nearly chose “Hey Rose,” but after revisiting Little Neon Limelight, it would feel like a waste to not showcase “15 Years.” It’s a straight-up garage rocker that features harmonies from the band’s other four members (this was before Toupin’s departure). And the song’s split personalities are a testament to Appleby’s versatility. From it’s garage-punk verses to a soulful, Allman-esque chorus, Appleby delivers whenever called upon.

Cody has the distinction of being the center point to two of Houndmouth’s more downer songs. Though From the Hills Below the City is the only album on which Cody sings lead, the hirsute stickman lends an aching, wavering voice to a band that usually sounds sunny, even in their darker moments. On “Long as You’re at Home,” he warbles about the steadying effect of love with a kind of universal weariness that lends a great deal of authenticity. A lot of people write songs about missing their partners, but few feel it out loud the way Cody does here.

Toupin is no longer a member of Houndmouth, but her contributions to the band are immeasurable. There’s an easy chemistry between her and Matt Myers, which comes from the two playing in a folk duo together before forming Houndmouth. Some of their best tracks feature Toupin’s smoky lead vocals, notable among them “Otis.” Ostensibly about the mythology of legendary singer Otis Redding, “Otis” is far and away Toupin’s best vocal performance, combining an easy soulfulness with throat-shredding highs in a chorus that aches and celebrates in equal part.