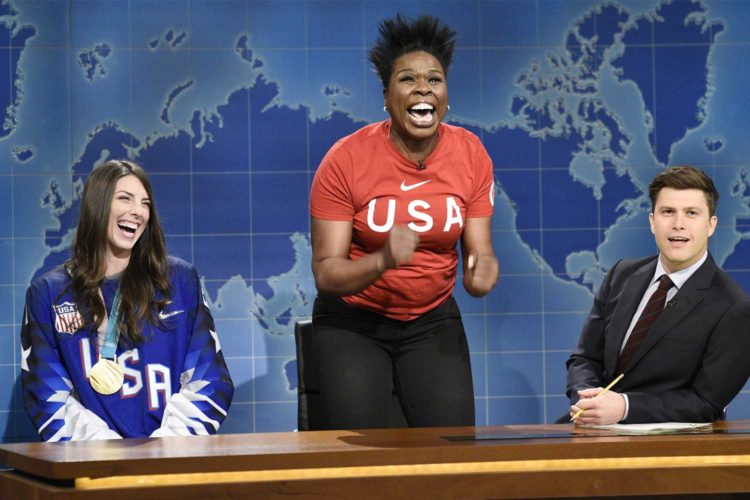 The U.S. hockey star and former Wisconsin Badger appeared on Saturday Night Live’s “Weekend Update” over the weekend to help Leslie Jones out with one of the great American pastimes: clowning on Colin Jost.

In the clip, Jones talks (hilariously) about her Winter Olympic experience last month, culminating in her new found love of ice hockey. This was crystallized in her R-rated live tweeting of the women’s final between the United States and Canada, a real nail-biter of a game that ran into the wee hours of the morning here.

Jost offered to show Jones some of the skills he gleaned from rec hockey, to which she brought in her own guru in Knight. The gold medal-winning forward then stayed for the remainder of the segment to join in the Jost pile-on.

Hillary also put the Knight into NBC late night on Monday with a visit to The Tonight Show. (Both programs originate from 30 Rock, so I hope she left the building on Sunday.)

Jimmy Fallon was joined at the couch by a handful of players, including goalie Maddie Rooney, clutch goal-scoring twins Jocelyne Lamoureux-Davidson and Monique Lamoureux-Morando, and another former Badger captain: Meghan Duggan.

Duggan spoke briefly on the successful campaign for better pay for Olympic hockey players. At the end of the segment, a curtain opened to reveal the full gold medal team, including Knight.

Knight played for UW from 2007-12 and is the program’s all-time leader in points with 262, while Duggan’s career points total of 238 from 2006-11 places her in third behind another Pyeongchang teammate, Brianna Decker (244 from 2009-13). Each has recently played professionally for the Boston Pride of the National Women’s Hockey League.