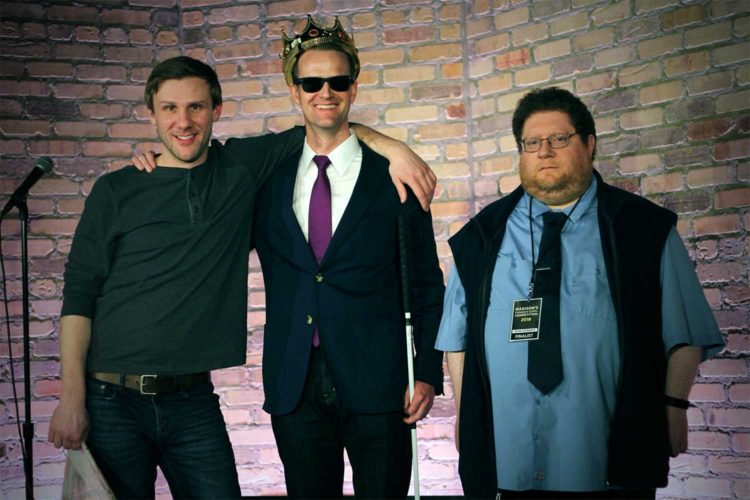 Johnny Walsh last week was named Madison’s Funniest Comic in the annual competition hosted by the Comedy Club on State, beating out fellow local funnymen Adam McShane and Kevin Schwartz. Walsh has been doing stand-up since 2010 and has worked as an attorney for local firm Axley Brynelson since 2013. And for the record, he’s an award winner in the latter pursuit as well.

On stage, Walsh uses deadpan humor to relate his condition, Usher syndrome, which severely limits his central field of vision. He approaches it in a matter-of-fact way, not unlike how many comics talk about day jobs or relationships (though Walsh touches on those subjects, too).

“I tend to focus on biographical material rather than the abstract,” he says. “My goal with my jokes is to give the audience a chance to get to know me and experience what I have experienced in my life.”

Walsh cites comics like David Letterman, Brian Regan and Kathleen Madigan as influences, and it’s easy to hear key parts of those three in his comedy. He’s biting without being mean-spirited and silly without straying too far into absurdity.

The Bozho caught up with Walsh to discuss his long, strange comedic journey.

The first thing a lot of people will notice about you is that you’re blind, and you’re very candid about it. Could you talk a little bit about living with your condition?

I am legally blind, not totally blind. In 1997, at the age of 15, I was diagnosed with Usher syndrome — an inherited condition characterized by hearing impairment and progressive vision loss. The vision loss is due to retinitis pigmentosa. RP is a degenerative condition caused by the degeneration of the photoreceptor, also known as the rod and cone cells of the retina. Its degeneration affects peripheral and night vision at first, and eventually can lead to blindness.

When did you first start doing stand-up, and how did you get into it?

I first started in August 2010 at the Argus Underground open mic. I worked at it for about four years, then took a three-year hiatus before returning to the stage at The Comedy Club on State in September 2017. I have always enjoyed stand-up as an art form and heard about the open mics when I attended shows at the Comedy Club. I attended a few open mics and finally worked up the courage to get behind the mic.

I do not write anything down in notebooks. If I come up with a funny bit, I will rehearse it out loud until I have tightened it up and gotten rid of as many words as possible. Then I will go to an open mic and try it out. The closest I get to writing jokes down in a notebook would be posting jokes on Twitter and Facebook. If they get a reaction on those platforms, I will use the same process of rehearse and tighten up and then practice at open mics.

I never take a notebook on stage at open mics. The audience experiences three things when you are on stage: the joke, the voice, and the persona. If you do not have your bits rehearsed, you sacrifice the voice and persona, and ultimately the joke. I also strongly believe that a joke is never done. You can always punch it up with new tags and work on the transitions to the next joke to keep the set flowing.

All that said, every comic has their own style that works for them. There is no right way to do it.

What was your initial reaction to winning Madison’s Funniest Comic?

Gratitude. I am so lucky to have The Comedy Club on State to call home. The staff, the local comics and the regulars who spend time at the Comedy Club are incredibly supportive and a blast to be around.

You’re a blind man and also a lawyer. How do you find time to do comedy when you’re not being Daredevil?

If laughing out loud is a fun thing for you, you can follow Walsh on Twitter @johnnywalsh.