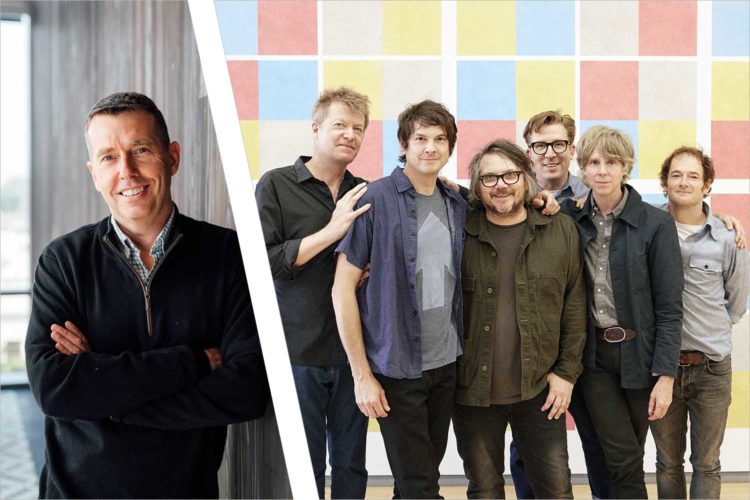 I am a big Wilco fan. They were one of the first grown-up bands I listened to, and they’ve been a constant presence in my life since I first heard “Jesus, Etc.” on a friend’s playlist. The incomparable Jeff Tweedy and his bandmates have spent the better part of three decades creating warm, probing jams that leave a chasm between their first and most recent albums a mile wide. Seriously, 1995’s A.M. and 2019’s Ode to Joy sound like they came from different planets, and I have no doubt whatever comes next will be similarly unexpected. Support comes from Canadian folk duo Kacy and Clayton.

Whatever the next evolution of bluegrass is, Yonder Mountain String Band will be there for it. Since the late ’90s, YMSB has been focused on driving the traditional genre forward, incorporating elements of modern country and jam bands. They’re the sort of artist who could sit comfortably on a lineup between Jason Isbell and Phish. And here the opener is just as intriguing as the headliner: The Big Wu’s Chris Castino and Milwaukee’s Chicken Wire Empire will play together.

Despite forming before some of today’s stars were even born, Athens, Ga.’s of Montreal helped lay the groundwork for today’s version of indie rock. They questioned gender, convention and reality itself with their kinda psych-y, kinda folky tunes, and lead singer Kevin Barnes is known for his flamboyant stage get-ups. Now more than 20 years into their run, of Montreal sounds fresher than they ever have. The forward-thinkers’ latest album, UR FUN, came out in January. With support from NYC bedroom pop duo Lily and Horn Horse.

Madison has a large jam scene, and I have no doubt this will be a competitive night of trivia. So instead of rattling off random band names, I’ll ask in earnest: is Vampire Weekend a jam band now? The indie heroes seem like they’ve been on that track for a while now, and their gloriously wanky 2019 album, Father of the Bride, all but cements it. Plus, frontman Ezra Koenig has abandoned his boat shoes for a fit that screams, “I showed up an hour late and hungover for my shift at Rutabaga.” And after seeing them at The Sylvee last summer, I’ve witnessed firsthand their ability to absolutely crush an improv instrumental. If those aren’t the hallmarks of a great jam band, I don’t know what is.

With their combination of gritty R&B chops and lead singer David Shaw’s radio-ready howl, The Revivalists sound made for stardom. The NOLA octet’s command of Americana traditionalism and pop penchant makes for a dynamic live act; they understand bombast without it being at the cost of their musicianship. Or: v good stuff. They released their fourth album, Take Good Care, in 2018. Joining them will be Tiny Desk Contest winners and recent Grammy nominees Tank and the Bangas.

This 2019 documentary is both an engrossing and uncomfortable watch, a deep-dive on American rape culture through the lens of one of its most infamous cases. Fair warning: for anyone unfamiliar with the Steubenville, Ohio football scandal, it’s a pretty horrific situation. Roll Red Roll examines not just what happened, but how easily it could have been stopped.

One of the most beloved musicals of the last 50 years, dropping into your backyard like a house from the sky. Wicked is a tale of two witches: one good, one bad, and both with a whole lot to sing about. It’s the winner of three Tonys, seven Drama Desk awards, and the prestige of being one of the only prequels in entertainment history to actually be good. Performances will continue Tuesday through Sunday, March 17-22 and March 24-29.

David Plouffe thinks he knows how to beat Trump. As the architect of Barack Obama’s historic 2008 presidential campaign, Plouffe has unique insight on grassroots organizing and digital advocacy, both of which are essential tools to unseat the current… well, tool. He recently authored A Citizen’s Guide to Beating Donald Trump, a playbook for anyone looking to upend the political status quo and complete with tips on how to phrase your points without sounding like a dick.

It’s a testament to Jason Aldean’s megastardom that he has his own energy drink. (And it’s… OK!) Of his nine albums, eight have been certified gold or platinum. He’s had 22 singles chart at No. 1. And now that Blake Shelton is busy with The Voice and Brad Paisley is being held captive by a deranged Peyton Manning, Aldean is probably the biggest male act in a highly competitive genre. It’s like seeing Garth Brooks in the No Fences-era — an arena rock show for the dirt road set.

This is a lesson in Japanese culture by way of Cirque du Soleil. Yamato practices traditional taiko drumming, but combines it with athletic spectacle and showmanship in a way that doesn’t make it feel old-fashioned. The group treats their giant drums like hearts, pumping life into the audience. Sounds like sensory overload. I’m in.

I love it when music feels cinematic. I like hearing something and immediately being able to say, “I’d definitely put this in X kind of movie.” I could see Sarah Elstran’s The Nunnery fitting into something like Booksmart or another indie about growing up. The way the Minneapolis-based singer’s silky voice winds itself around handclaps on the song “Proud” sounds intimately anthemic. Also noteworthy is The Nunnery’s co-headliner, Asumaya, the multi-instrumental looping project of Madison musician Luke Bassuener.

Dark Waters is something of a departure for director Todd Haynes. He’s primarily known for rock histories (Velvet Goldmine and I’m Not There) and meditative dramas (Far From Heaven and Carol), but 2019’s Dark Waters is a fairly cut-and-dry political thriller. It stars Mark Ruffalo as a lawyer trying to link water pollution deaths to a major corporation. (This might be the most Mark Ruffalo role ever.) Under another director it could get watered down into a store brand-Michael Clayton, but Haynes’ deft touch and knack for pacing and mood make Dark Waters worth checking out. The screening will precede a panel discussion about PFAS and F-35s co-hosted by an array of local nonprofits.

In the new Real Life, author Brandon Taylor creates a tangled web. His protagonist, Wallace, is a queer, black Southerner feeling a bit out of place at his Midwestern college. Prejudice is pervasive, so the grad student maintains his distance. But over the course of a long weekend, Wallace is hurled into the drama he tried so hard to avoid. Plotwise, Real Life sounds a bit like Chad Harbach’s stunning debut novel, The Art of Fielding, but with less baseball. The 30-year-old Taylor, a UW alum, is also an Iowa Writers’ Workshop vet; previous workshop attendees include lauded storytellers like Philip Roth and Flannery O’Connor.

With his novel Real Life, former biochemist Brandon Taylor dug into his personal history to create a coming of age story for the 21st century. The book follows Wallace, a queer, black science student who feels more than a little out out of place at his lily-white Midwestern college. Real Life is a story of ingrained prejudice in academia, one that acclaimed playwright Jeremy O Harris says pulls the “profound from the mundane.” The 30-year-old Taylor, a UW alum, is also an Iowa Writers’ Workshop vet; previous workshop attendees include lauded storytellers like Philip Roth and Flannery O’Connor.

Sports fans will know twins Jason and Randy Sklar from their old ESPN Classic show Cheap Seats, which was essentially an athletic version of Mystery Science Theater 3000. The Sklars are huge sports fans and are at their best when ragging on the topic. But that doesn’t make them one-trick ponies. The Sklars are a hilarious tag team, ping-ponging off each other to pull double the laughs out of whatever crosses their path.

You may not know their name, but Shellac features one of the most influential figures in the history of alternative rock. Singer and guitarist Steve Albini — also of Big Black — is a superproducer best known for recording In Utero, the final album by FUCKING NIRVANA. Its dark, tortured ambiance is quintessential Albini, whose work with Shellac melds his own abrasive guitars with Bob Weston’s cheeky lyrics. This is one of the most important rock bands ever, folks. Take note. Minnesota sister-punk duo Loki’s Folly will open this sold out show.

Though Caleb and Will Chapman are the sons of Christian musician Steven Curtis Chapman, they’re not making church music. Instead, their band Colony House makes ambitious indie pop, pulling big ambition out of relatively inauspicious instrumentation. Their third album, Leave What’s Lost Behind, was released in January. With Tyson Motsenbocker, a balladeer from the Pacific Northwest.

Imagine if Tom Waits and Nick Cave formed a string band with the unquiet spirits of old-timey cattle rustlers — that’s Murder by Death. The gothic Americana group inhabits a dark corner of country music, drawing on elements of punk rock and seriously spooky imagery to offer a dark vision of the west. But their latest album, 2018’s The Other Shore, leaves the dusty ground to explore more cosmic realms. Featuring Amigo the Devil, a similarly dark folk artist with a fixation on villains.

A friend recently asked if I knew any good post-hardcore bands in Madison, and without a second thought I said, “Hex House.” The trio is drawn to math rock intricacy and delivers it through a dynamics-driven sound. Hex House finds immense power in quiet and their self-titled 2019 debut is a perfect example. With trans-American post-punk act Conan Neutron & the Secret Friends, as well as the first local show since 2015 for Madison art rockers Bron Sage.

S. Craig Zahler does not make movies for the squeamish. His films are brutal, bloody and at times a challenging watch. But for those with the stomach, the writer/director is the closest thing that modern cinema has to a new John Carpenter: a spooky auteur. (Like Carpenter, Zahler even composes his own unsettling music.) 2015’s Bone Tomahawk was Zahler’s directorial debut, and it makes a strong first impression. In this western horror hybrid, Kurt Russell, Richard Jenkins, Patrick Wilson and Matthew Fox set out to find an indigenous tribe of cannibals who’ve kidnapped two white settlers. Bone Tomahawk will put you on the edge of your seat and then shock you right out of it.

As I’m writing this, it’s like 60 degrees out and I have the patio door open. Biking season might (fingers crossed) be officially here, and the Madison Bikes Mural Ride is a great way to kick it off. Pedal by literal miles — five for the short ride, 12-14 for the long one — of art installations and air out the musk of hibernation.