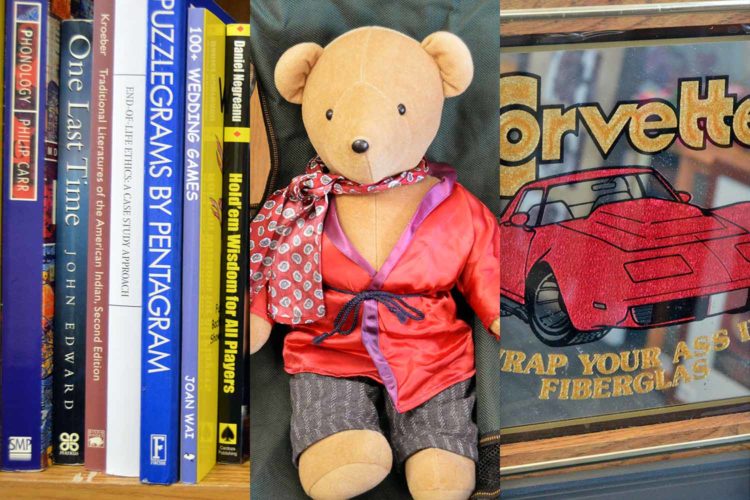 “Sometimes you eat the b’ar,” says The Stranger in The Big Lebowski. “And sometimes the b’ar, well, he eats you.”

It was only a matter of time before my luck ran out. That’s no discredit to Agrace, though. In thrifting, as in life, there are ups and downs. The b’ar will inevitably eat you, as Sam Elliott’s Stranger so succinctly put it in that classic Coen Brothers film. That said, my findings were a little lighter than usual — but this is a case of quality over quantity. Yes, I may have found less stuff, but the stuff I did find was strange enough to merit writing about. (And stick around for a field trip across the street.) 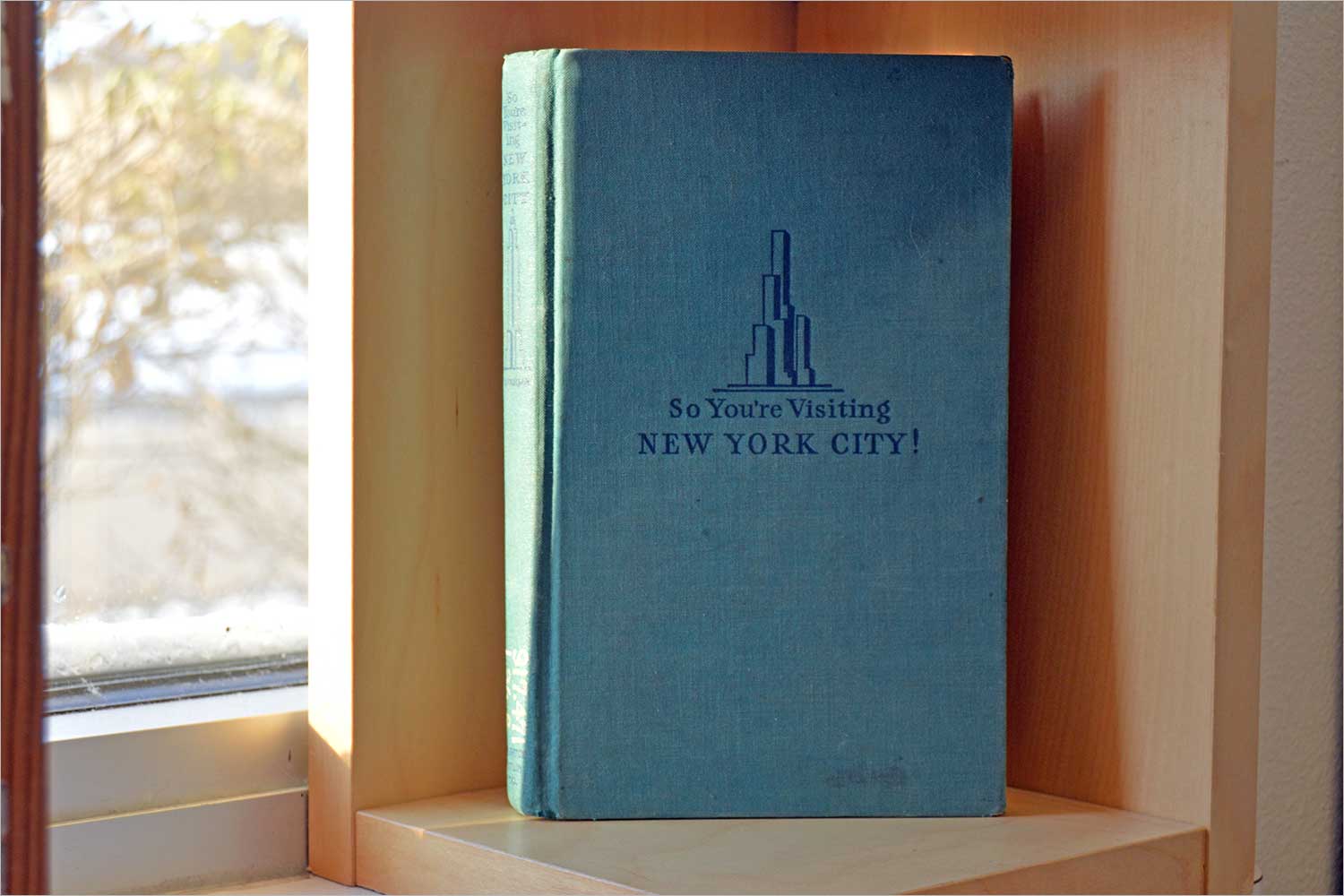 Ah yes, The Big Apple! The city that never sleeps! Presumably a lot has changed in New York since this book was published in 1939. I mean, it predates disco by more than 30 years. But it’s undoubtedly filled with useful advice about haberdasheries, shoe-shines and which jazz clubs have the best left-handed cigarettes. This could be a good anticipatory buy for whenever scientists figure out time travel; you can never be too prepared. 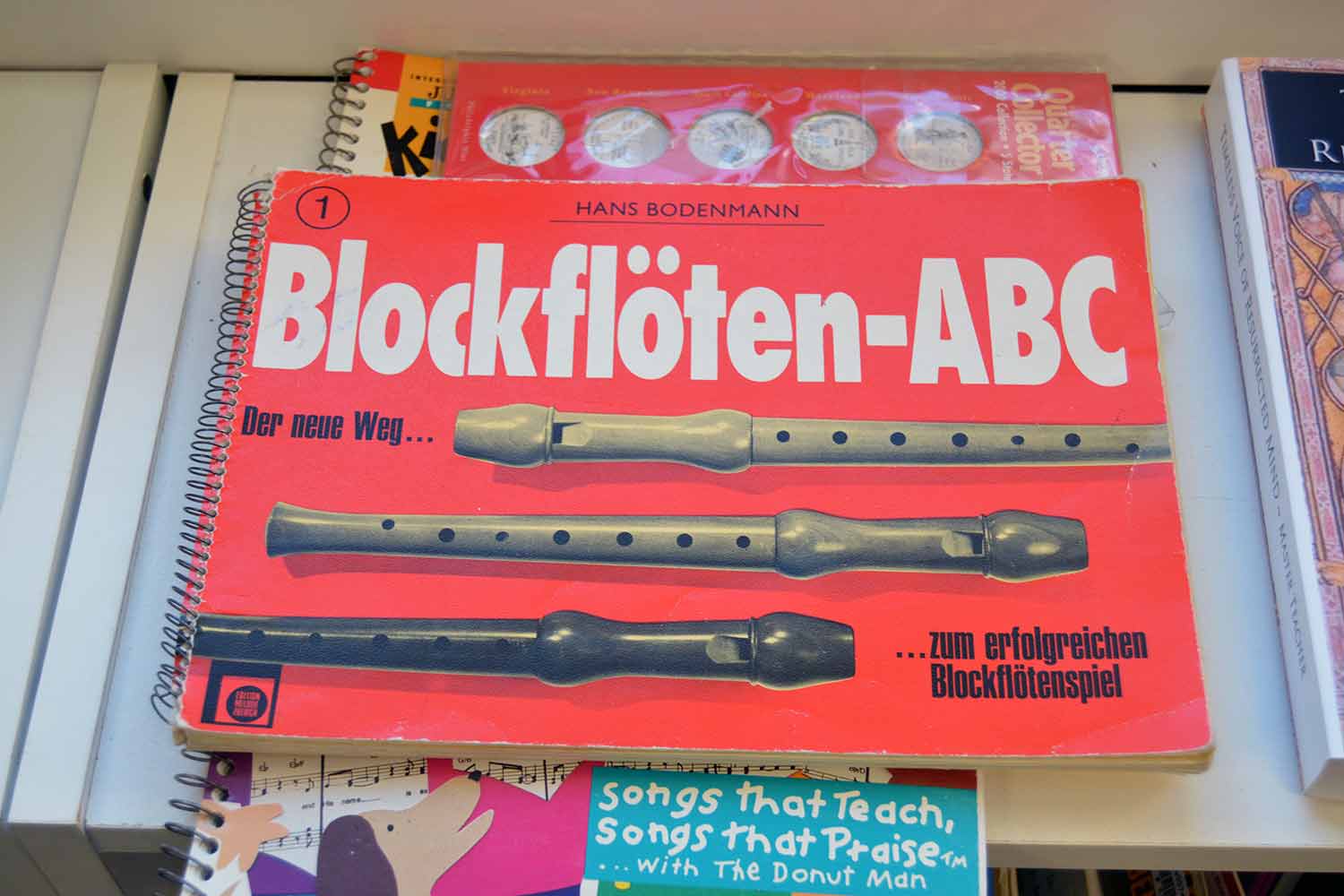 The first thing about this book, obviously, is that it’s entirely in German. “Blockflöte” is the German word for “recorder,” aka the instrument we all learned to play in elementary school before promptly forgetting. This book allows you to get your groove back and reteach yourself the smooth stylings of the blockflöte. Even if you can’t speak German, music is a universal language. A little bit of practice and you’ll be wailing on that blockflöte like Kenny G in no time. Viel Spaß beim Spielen, Leser! (That’s “Happy playing, reader!” in German according to Google Translate.) 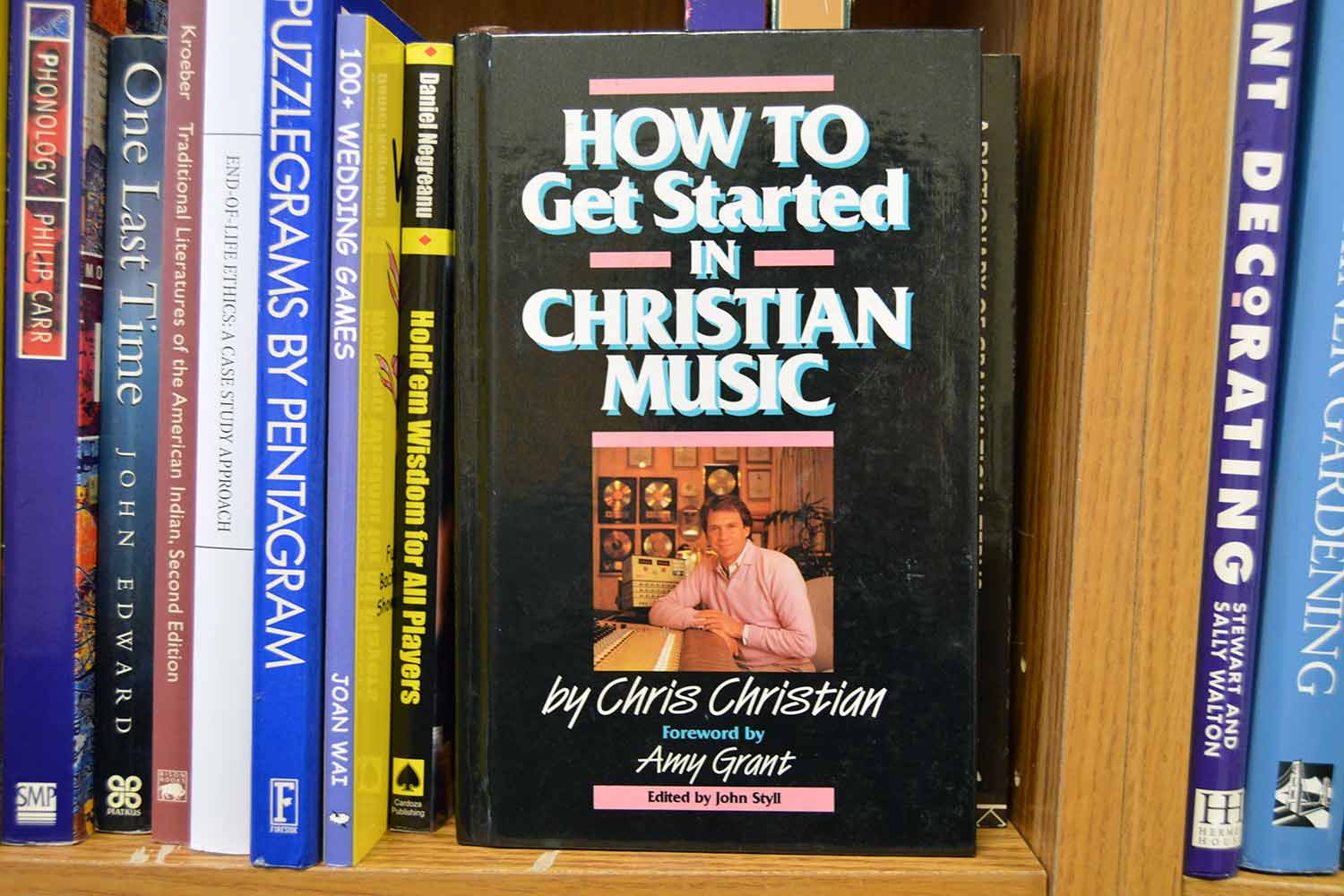 ‘How to Get Started in Christian Music’

Agrace has a hefty selection of books, which is why my finds were literary-heavy. None spurred as many questions as How to Get Started in Christian Music. For one thing, it’s written by a guy named “Chris Christian,” which sounds like a name he made up on the spot. I imagined the publisher asking, “Why should I publish your Christian music book?” Replied Chris Christian: “Well, my name is Chris Christian.” But it has a foreword written by Amy Grant, one of the most successful Christian artists ever. If she was willing to coign this project, there must be some truth to what Chris Christian says. And surprisingly, there is: Chris Christian is a prolific songwriter in the secular music world. His songs have been recorded by everyone from Elvis Presley to Hall & Oates. The world is a magical place, full of wonder.

Price: I forgot to write it down, but any advice from Chris Christian is priceless. 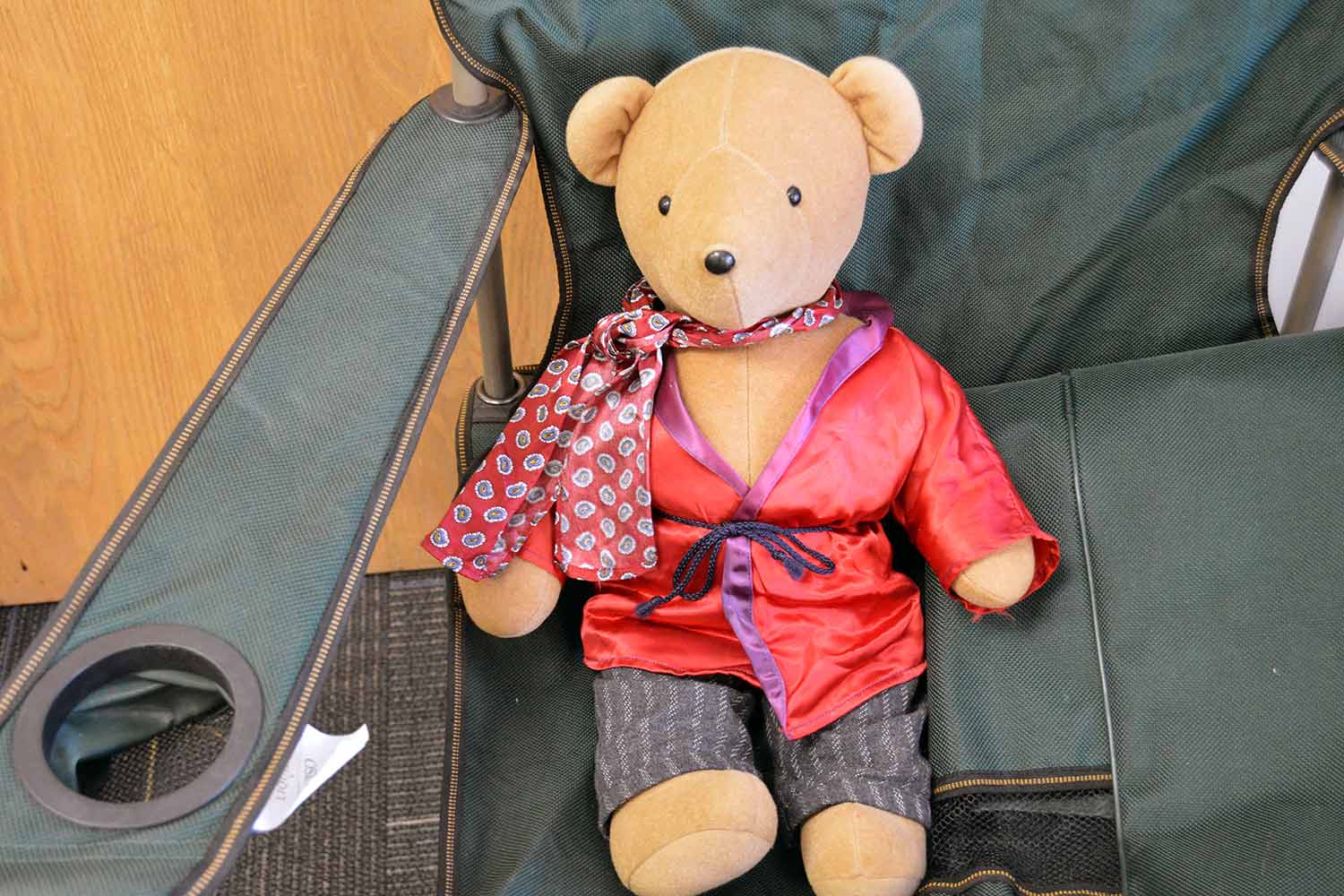 Humphrey, the Bear Who Fucks

One look at this old teddy bear and you know he fucks. For starters, wearing a smoking jacket is like carrying a big neon sign that says, “I’m the one doing all the fucking around here.” In internet parlance, this bear exudes big dick energy. I half-expected him to have a little tumbler of cognac and a Cuban cigar sitting alongside him. And his name is “Humphrey,” according to the tag. There you have it: Humphrey, the Bear Who Fucks. 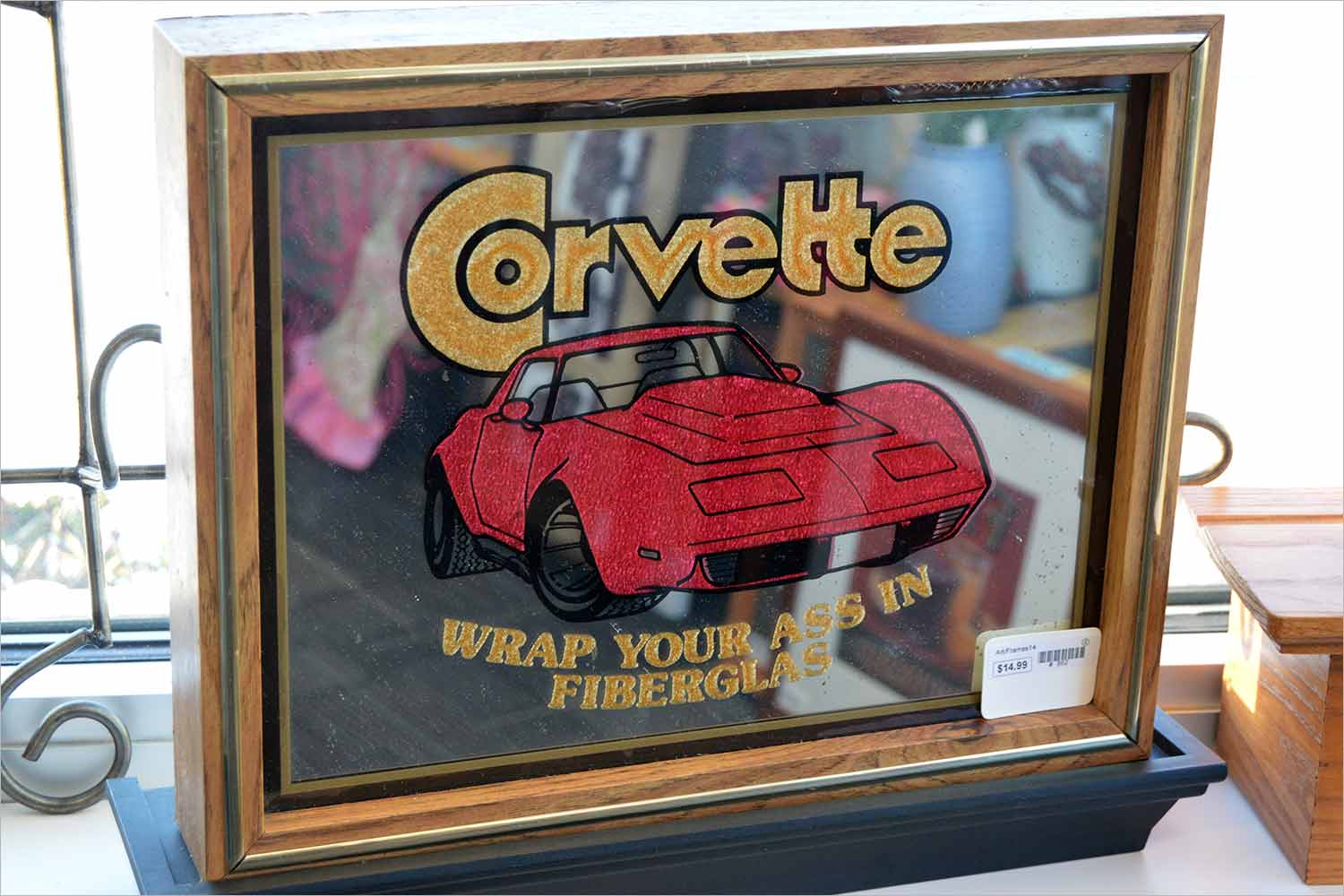 There’s a subsection of art that I like to call “finished basement art.” It’s all the great Midwestern kitsch you grew up looking at while playing Mario Kart 64 in your friend’s rec room. Paintings of fish, wooden clocks… it could all fall under the umbrella of finished basement art (henceforth “FBA”). For example, take this Corvette — it’s mirrored, which is a great start as unnecessarily mirrored things are peak FBA. It’s also a picture of an American muscle car, which checks another FBA box. Add in a playfully crude slogan and you’re got a premier example of FBA. I can practically smell the hockey pads from the other room. 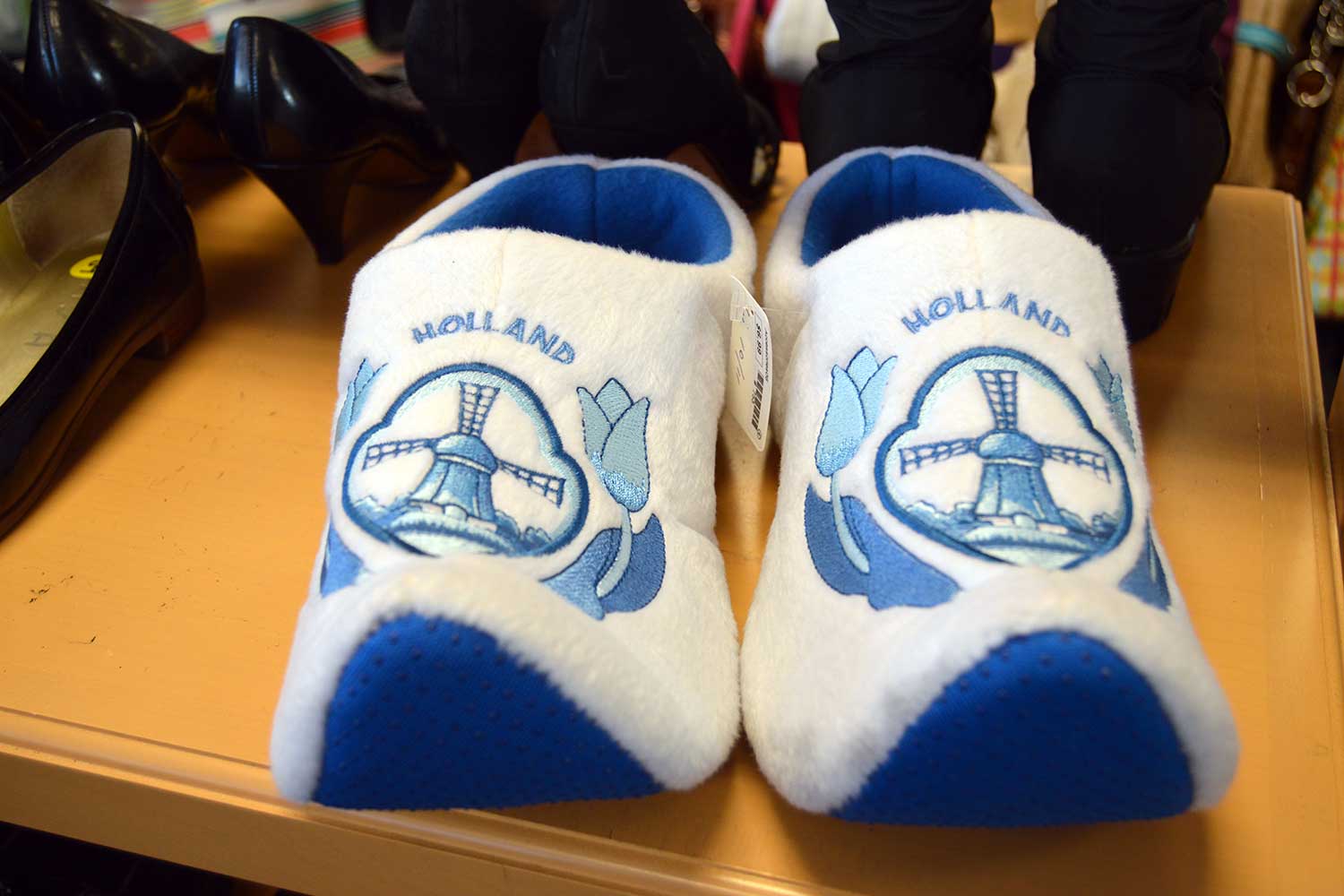 Holland calls to mind images of wooden clogs and windmills, so it makes sense that these souvenir slippers would be a combination of each. Sure, the pointy toes may seem inconvenient for cozy clothes, but to balance it out it looks like they’ve never been worn. This means one of two things. It could be that someone went to the Netherlands and bought these slippers, only to change their mind upon returning home. Or the person got them as a gift from someone and never wore them, probably because they don’t look all that comfortable. The soles are arched, which doesn’t seem conducive to comfy slippers. That said, I could totally see someone like Kerwin Frost rocking these bad boys, and he’s a pretty stylish dude.

Unfortunately, I didn’t find as much as I hoped to at Agrace. Some of their stuff was a bit pricey, and even more of it was — for lack of a better term — old people stuff. That doesn’t mean it’s bad stuff; it just wasn’t for me. But I still needed to get my full thrift fix, so I popped across the street to Goodwill East Towne. And this find was too good not to share, so I’m tacking it on the end here: 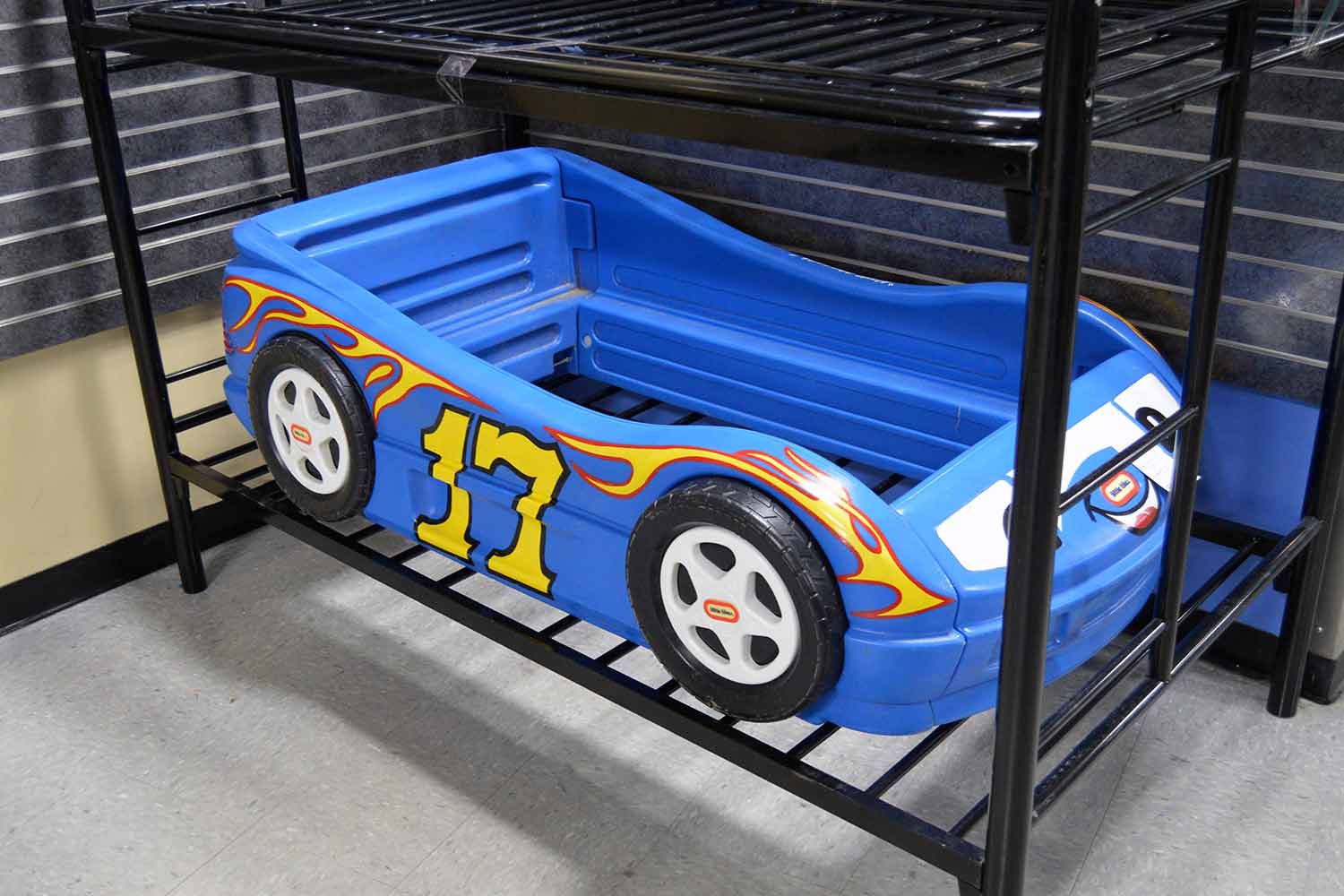