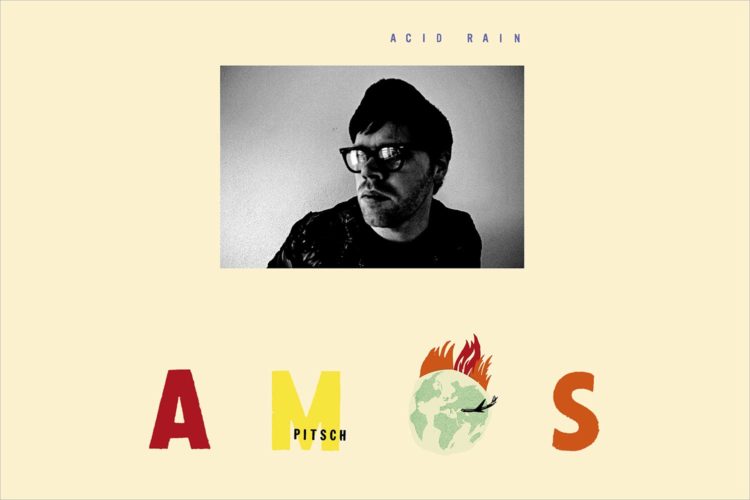 Live music is on hiatus, but that hasn’t stopped Wisconsin artists from putting out new work. With Quarantunes, we’ll spotlight recent releases in the time of lockdown.

Of course Amos Pitsch made a great quarantine album. Acid Rain, released May 1 on Crutch of Memory, was the first record I heard that had been written and recorded entirely during COVID-19 lockdown. To a certain extent, there’s likely to be an impending wave of such releases as we continue to ride this out. But Acid Rain is no novelty time capsule; it’s something special. The record feels bound to age well as a standalone release in the Appleton songwriter’s oeuvre, standing alongside his best work in Tenement, Dusk and Technicolor Teeth.

“Right at the end of March, as April was approaching, I decided I needed to work on something personal; something to lift my spirits,” Amos told me over email. “Wisconsin’s Safer at Home order had just begun and I suppose I needed a sense of purpose in the face of sessility.” After laying down an improvisatory percussion track in the Crutch of Memory studio he co-runs with Julia Blair (Dusk) and Andy Harris (The Goodnight Loving, Jaill), Pitsch set to work on what would become Acid Rain. During the month of April, he wrote, recorded, mixed, mastered and released the album entirely on his own.

This process, of taking the “solo record” impulse to its extremes, reflects the way many of us have had to make do in quarantine with what we have on hand. Of course, most of us didn’t break out our classic Roland VS-880EX typically used to record demos and get to work. But hey, few can crank out a tune like Amos.

“It definitely wasn’t the shortest time span in which I’ve written an album,” Pitsch says. “Both Tenement’s The Self-Titled Album and my first solo album Lake Effect were written and recorded in about a week. I’ve found that giving myself a tight schedule for finalizing a record is crucial to 1) getting it done in a reasonable amount of time, and 2) retaining a good energy to the recordings.”

That energy is tactile here, right from its first seconds on “I’m So Angry.” It’s one of the more direct tracks on the album, yet I love how universal it feels. “I’m so angry / Angry now / Who’s to blame for all this awful shit / And all the pain that comes along with it?” This sentiment, which in another time might seem oblique, is rendered crystal clear with the shared context of our soured spring. When Amos references Wisconsin Sen. Ron Johnson and his “seven-figure gold,” it’s one of the few proper nouns on Acid Rain: a quick but solidifying articulation which locally grounds the album.

For a record so tied to its cramped genesis, there’s a lot of light on Acid Rain. Like much we’ve heard from Pitsch in the past, it nails the dusty, folky power pop sound throughout. The album is available on Bandcamp, where if you wait to buy it until June 5, Bandcamp will once again waive their cut of the day’s sales.