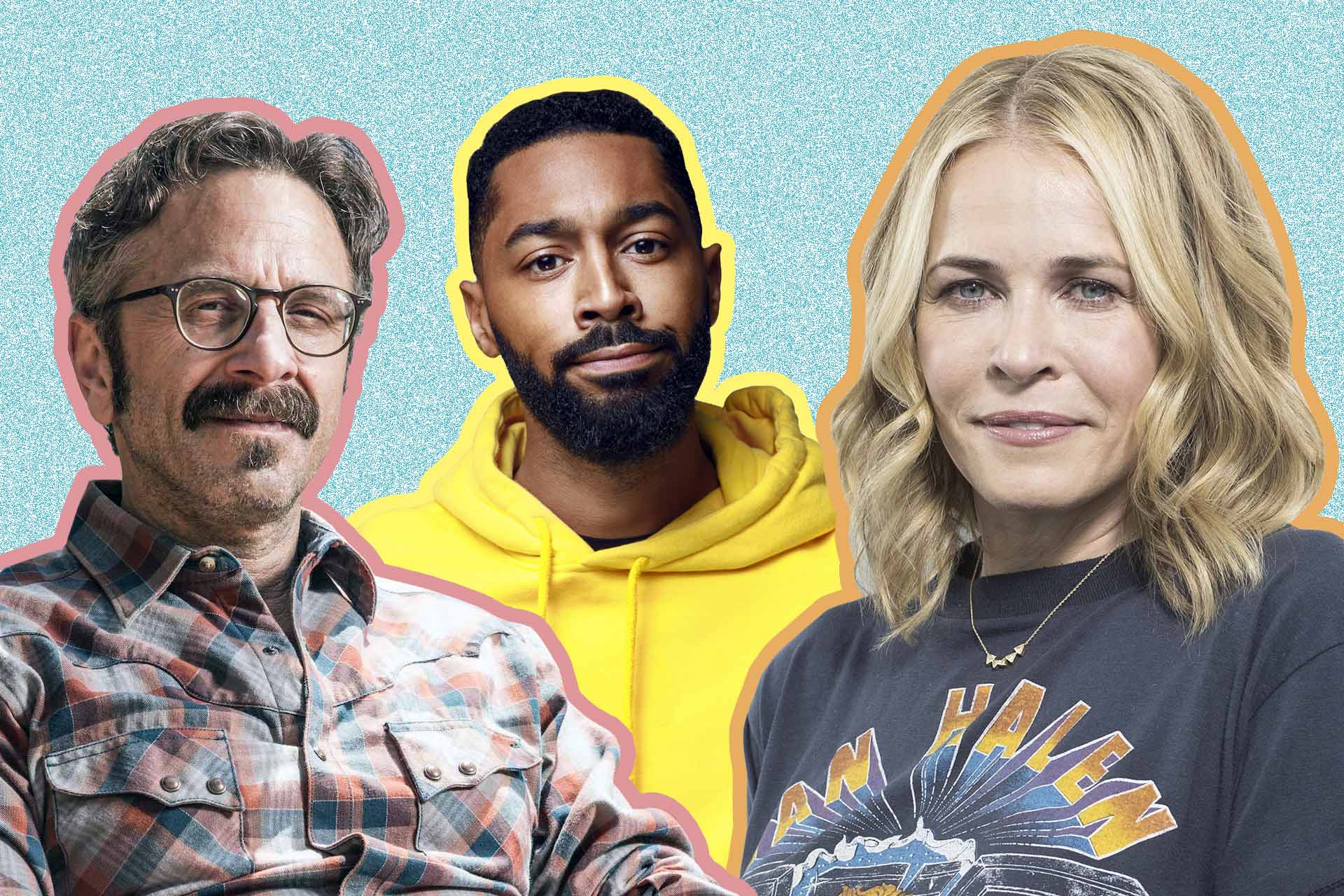 This would normally be where I’d use a pithy one-liner to introduce the piece, but why bother? I’m not anywhere near as funny as the following comics.

This spring, there will be a ton of opportunities to get a good laugh in Madison. Whether you’re into Kyle Kinane’s bodily horrors or Chelsea Handler’s… well, bodily horrors, here’s a look at the funny people coming to town this season.

First and foremost, I would like to apologize to Kyle Kinane. Back when he performed at the Comedy Club in 2016, my partner asked to take a picture with him after the show. “Alright, but no flash,” he said in true grumbly Kinanian fashion. Being a few drinks deep at this point — and still amped from his hysterical set — all I heard was “flash” and snapped this gem: 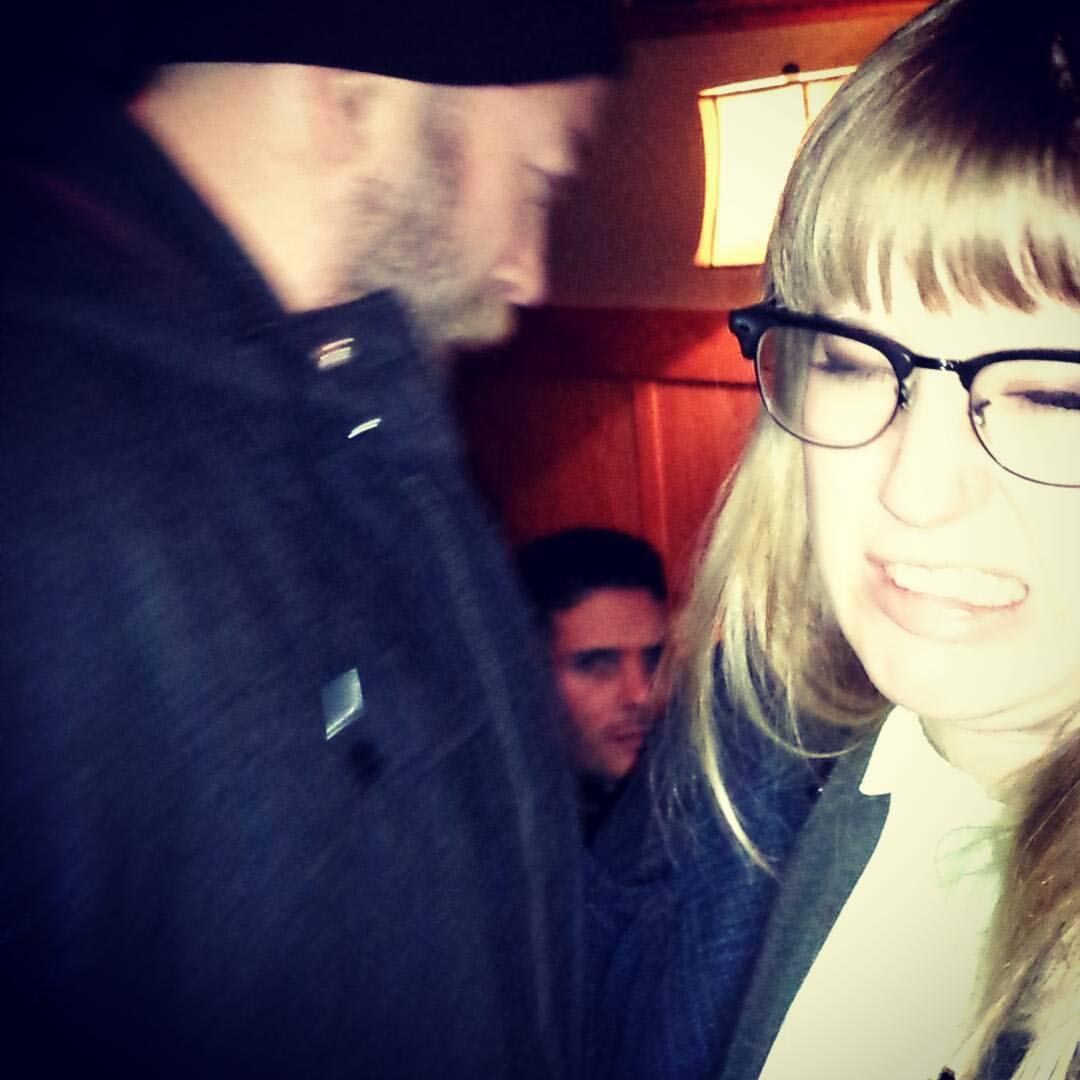 He left the bar (and probably Madison) shortly thereafter, bag of greasy food in hand. It was the most Kyle Kinane thing that could possibly happen, and it’s all my fault. If you run into him, please tell him I’m sorry, and don’t take a flash photo with him.

Born in South Korea and adopted by white, evangelical Christians from Plainfield, Illinois, Joel Kim Booster brings a perspective to comedy you’ve probably never heard before. The stand-up deploys his unique upbringing frequently in his humor, more often than not mixing it in with his sexual frankness. Booster likes to say he “knew he was gay before he knew he was Asian.” He’s appeared on both Conan and Corden, and he is currently developing an autobiographical Comedy Central series called Birthright.

Say what you will about Jeff Foxworthy and his Blue Collar Comedy Tour, but at least he had the good sense to introduce Ron White into comedy’s mainstream. Unlike his catchphrase-farming tourmates, the surprisingly liberal White is a real comic’s comic. A droll Navy vet with a seemingly endless well of humiliating stories, White leans into his own worst impulses with a wink. He’s always in on the joke, even when the joke is very much on him.

HERlarious: Comedy for a Cause

Check out these four hilarious women and raise money for a good cause while doing so. Allie Lindsay, Dina Nina Martinez, Vanessa Tortolano and Tulin Waters are slated to appear, bringing with them varying feminine perspectives to the table, with the one connective thread being that they are all funny. HERlarious serves as a dual benefit for both Lady Laughs Comedy and the Human Rights Campaign.

Unruly audiences are no match for Tone Bell. He was once a first-grade teacher, a job that takes an almost supernatural patience. That’s a valuable skill to have in comedy, where failing miserably from time to time is par for the course. But Bell’s not failing very much these days. His measured, thoughtful delivery makes every joke hit that much harder (especially when that joke is about a grown man actively trying to not piss himself). Plus, he’s currently starring on the CBS sitcom Fam alongside Nina Dobrev. That’s a pretty big win.

This NOLA native has a rich history with Madison. In 2014, Normand recorded his album Still Got It at the Comedy Club, and now he’s back for more. A four-time Conan vet, Normand’s five performances here will be used on his next, still untitled album. Too bad Still Got It is already taken, because it will undoubtedly be true of Normand’s return.

Call this a quasi-homecoming for Tom Segura, who lived in Milwaukee for a period in his nomadic childhood. And his comedy is very Midwestern in spirit. Equal parts bitter and raunchy, Segura frequently muses on the minutiae of everyday. And his perspective is that of a seen-it-all curmudgeon, one who has a sarcastic response to pretty much everything. Also, he’s the reason I can’t watch a true crime documentary without thinking about the phrase “Dookie Shoes.”

I feel comfortable in saying that Matteo Lane is probably the only comic on this list with a six-octave vocal range (though Ron White does continually surprise). Before choosing stand-up as his career path, Lane was an opera singer in Italy, which is like the place to do opera. He brings that same gravitas to his comedy, delivering jokes that are both effervescent and acerbic. He’s a frequent late-night guest (with Colbert and Meyers both on his resume) and co-hosts a podcast called Inside the Closet with Emma Willmann.

You know who Chelsea Handler is. Bestselling author, longtime TV staple and all-around funny person, Handler is one of the biggest draws in comedy. After all, she was one of the first women to use the same frank, often downright gross terminology that male comics do to describe her sex life. And she does it with an almost surgical precision. Without Chelsea Handler, there would be no Amy Schumer or Whitney Cummings. She’s a true trailblazer, as well as a titan of the art.

When I was in college, I took a class on stand-up comedy, and my professor thought Chad Daniels was one of the funniest people in the world. He isn’t wrong. Daniels brings a grounded, familial blend of humor that can appeal to both comedy dorks and casual fans. If you like Ray Romano, you’ll love Chad Daniels. And the last time I checked, everybody loves Ray.

Comedy is a profession synonymous with risk-taking, and what Dane Cook is doing here is a bit of a risk. He is undoubtedly the most maligned stand-up of the past 20 years. Viewed as both a sellout and a joke thief, and embezzled out of $18 million by his own brother, the past decade hasn’t exactly been the kindest to Cook. But he knows that, and has made it the subject of a comeback tour. He’s sharper and bit more refined this time around. There’s a sense of precision in his jokes now. And he’s clearly the winner of his famous feud with L***s C.K.

Fred Armisen is another comic with a deep musical background, playing drums in Chicago post-hardcore unit Trenchmouth before turning full-time to comedy. Now the Saturday Night Live and Portlandia vet is fusing his two interests into one show, combining his penchant for offbeat character humor with his own serious talent as a musician. Expect this to be quintessential Armisen: zany, esoteric, and impossible to pin down. For further reference, check out his comedy special Standup for Drummers, released via Netflix in 2018.

At 28, I don’t really have heroes anymore. But Marc Maron is certainly a guy I look up to. He’s a self-flagellating kindred spirit whose neuroses are always rooted in empathy. Listening to his WTF podcast, it’s fascinating how Maron uses his own needling self-deprecation and boundless cynicism to draw huge reveals out of his guests. But WTF only introduced Maron to the mainstream; among comedy’s most dedicated fans, he’s been a folk hero for three decades. On a recent podcast, longtime champion Conan O’Brien marveled at Maron’s ability to both win and lose an audience at the same time. But for Maron, it’s in the losing that he finds inspiration.