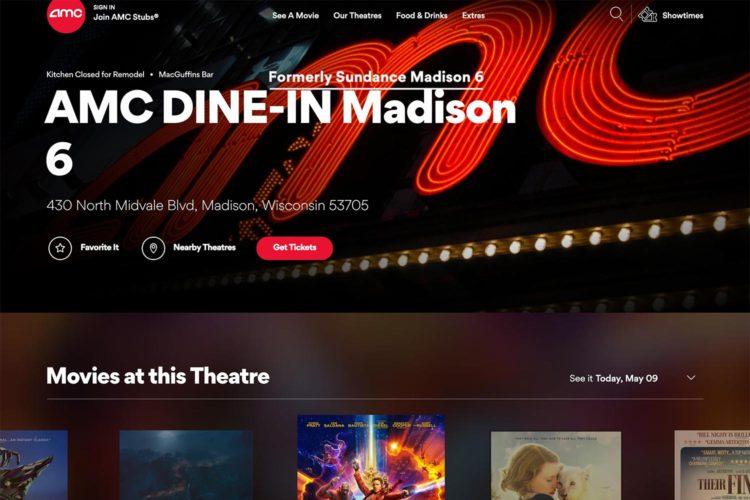 Carmike Cinemas, the chain that has owned Madison’s “indie” theater since 2015, was purchased itself last year by movie conglomerate AMC. And now AMC has decided that the place should be called the “AMC DINE-IN Madison 6,” which… I mean, wow. That pile of word vomit makes the cinema sound like a low-rent superhero team — like Great Lakes Avengers low-rent (and if you don’t get that reference, that’s how low-rent the Great Lakes Avengers are).

We’ve come up with a few names that are perhaps better-suited for The Independent Movie Theater Formerly Known as Sundance.

The “DINE-IN” part of the new name, with its ham-fisted use of caps, is downright silly (especially since the theater’s website says “kitchen closed for remodel”). Since most new theaters serve food, increased dining options may be important for the former Sundance space to compete long-term with the mega movieplexes. But maybe follow the old screenwriting adage of “show not tell” and don’t put it in the name.

Or, simply, “Sundance.” After all, this is what people know it as already. Slapping on a new logo on isn’t going to change that. Nobody calls the very tall building in Chicago the Willis Tower, right? AMC is the largest movie theater chain on the planet, so you’d think they’d have a little extra scratch to pay Robert Redford to continue using the name.

This seems like the most logical choice. Not only is it located at the Hilldale Shopping Center, it’s also a nod to the old Hilldale Theatre, a small, two-screener that stood for 40 years where a gargantuan Target now resides. (An extra large bucket of diet soda to pour on the curb in memoriam will be available at the concessions counter.)

Look around you at the army of college students dressed like extras from Saved by the Bell. Retro is in! So why not turn the clock way back and celebrate cinema’s humble beginnings by not only offering food and drink, but showing all the films on a zoetrope, because you haven’t really seen Mahershala Ali’s award-winning performance in Moonlight until you’ve seen it on what looks like a cross between a table lamp and a ViewMaster toy.

Holy fuck, right? I mean, who can even think about what we should call a movie theater when Donald J. Trump, president of the United States, fired the director of the FBI, a man who was currently leading a counterintelligence investigation into whether or not the Trump campaign colluded with the Russians to influence the outcome of the 2016 election, thus throwing an already on-edge Washington into further turmoil. Also available: AMC Watergate 6.

You know what, maybe “AMC DINE-IN Madison 6” isn’t that bad after all.