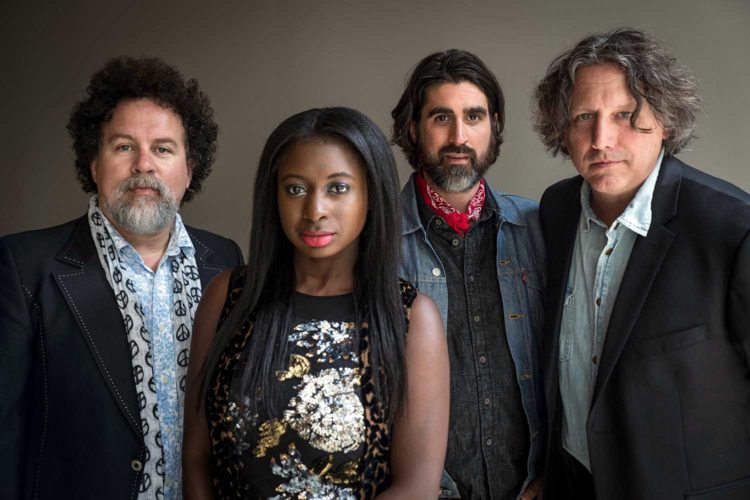 I promised myself I wouldn’t make Steve Gorman talk a bunch about The Black Crowes. That didn’t last long.

The drummer is currently on tour with his soulful rock outfit Trigger Hippy, which plays at High Noon Saloon on Nov. 13. They have a new album called Full Circle & Then Some, and it’s very good. But Gorman is also a bonafide rock legend who recently released a book about his old band, Hard to Handle: The Life and Death of The Black Crowes, a memoir written with Wisconsin native Steven Hyden. And there are few rock ‘n’ roll stories more enthralling than those of The Black Crowes.

Formed in the early 1980s as “Mr. Crowe’s Garden,” The Black Crowes became one of the most commercially successful groups of the ’90s. They sold millions of records and spawned timeless singles like “Remedy” and “She Talks to Angels.” But like The Kinks or Oasis, the group was derailed by the never-ending fights of its sibling songwriting duo Chris and Rich Robinson. The band called it quits in 2015 after an acrimonious breakup (though a reunion may be on the horizon, sans Gorman).

“There’s never been a documentary or book that’s told the Black Crowes story before now,” Hyden said in an email. “As much as Chris and Rich might hate this book, I feel like Steve has done them a huge favor by writing it.”

If the Robinsons have been “terrible stewards” of the Crowes’ legacy (as Hyden says), Gorman is the opposite. He’s an original member of the group, having been around since the Mr. Crowe’s Garden days. (It was only the second band he’d ever been in, in fact.) And he’s a charismatic guy with a wealth of cautionary tales about one of rock’s hardest living bands to tell.

Ahead of Trigger Hippy’s Madison stop, I spoke with Gorman about his new band, his old band, and that time he tried to fight my favorite band. This interview has been edited for brevity and clarity.

Now that you’ve spent so much time away from one band and with another, has playing with Trigger Hippy given you any new revelations on music outside of your previous experience?

Oh, for sure. I learned a lot. The first time the Crowes went away, at the end of 2001, I joined a Welsh band called Stereophonics for about 10 months. And that was immediately eye-opening and revelatory in terms of just how skewered my view of music was coming out of The Black Crowes. And there have been reminders ever since just how much my simple 15-year-old’s brain joy of playing music was so long gone and buried.

The Black Crowes was a really contentious band to be in. That was a very difficult experience. If you’re not enjoying something, or you’re not able to or have forgotten how to enjoy it for whatever reason, you probably need to stop doing it. Especially music.

All this to say, Trigger Hippy’s never had those kinds of experiences. None of those things within The Black Crowes have ever showed themselves in this band on any level.

You wrote in ‘Hard to Handle’ about how The Black Crowes essentially had to learn to be a band playing arenas instead of tiny clubs to 12 people a few nights a week. Would you still advocate for that approach, and do you think it made the band’s problems worse?

The problems would have been there. The original three members of The Black Crowes not named Robinson, we had our moments of stupidity as young guys suddenly in a huge band. But we all got along, and we treated each other and The Black Crowes with great respect and appreciation. Two members of the band were never able to do that, so that was going to be there regardless.

I think if our first record (Shake Your Money Maker) had come out and we’d not had a great manager and had just been a band who’d gone out and played clubs for a year, I don’t think we would last very long. I don’t think anybody would have put up with it, because the true nature of the personality of those brothers would have destroyed it so much faster.

But by 1991, we had become a formidable rock ‘n’ roll band. We had transcendent moments. You walk off the stage and you’re in a trance. I know it sounds trite, but it’s like walking out of a yoga class. (laughs)

You’ve played with both American and British rock bands. Rock still gets a lot of mainstream airplay in England, so I am curious to know how the crowds differ between the two countries.

The first show we ever played in England was in 1990 at the Marquee Club. We learned in one night the difference, back then even. The audience sang every word to every song we played at the top of their lungs. We were never a band that would say “sing along!” and Chris would stop singing and let the crowd take a chorus. That was never The Black Crowes’ thing. But in England, that happened all the time. I think even before the advent of smartphones, English people were more down for the moment than Americans were.

When I was with Stereophonics, we did show at Millennium Stadium in Wales. It was Dec. 20 — five days before Christmas — in a country where no one has five cents to their name, and they sold 72,000 tickets and it felt intimate somehow. It’s like the local boys from the village done good, but that doesn’t even explain the fervor and the love and ferocity of the audience that night. I’d never played a show before or since that was like that.

We spent some time with Noel (Gallagher) going back to ’99, and any time he was around we all just got along really well. There was never a concern that the two sets of brothers were going to fight each other. We kind of saw ourselves in each other. I’m sure the brothers did anyway.

Pete (Angelus), our manager, had the idea. He said, “What would you guys think about doing a tour with Oasis?” It was like that Malcolm Gladwell book Blink. Instantly, the three of us were like, “Oh my god. They’d be perfect.”

Bands are like dogs. You sniff another band and you sense it right away. You know who’s a friend or foe, who’s dominant and who’s submissive — you vibe out other bands right away. I think from afar we sensed some common ground there. And we got on great! I saw Liam Gallagher last week in L.A. I hadn’t seen him in six or seven years, and it was literally no different than if I saw one of my buddies from high school.

That’s great, because my favorite story in ‘Hard to Handle’ is the one where you tried to fight Liam at Glastonbury for allegedly slagging off The Black Crowes on stage.

Of course. It’s funny, too, because to this day, I’ll hear from fans that were there, and they’ll say, “He absolutely did slag you. He’s lying if he says he didn’t.” Which makes it even better. (laughs) I hope he’s been lying about it ever since.

But that’s what I mean: It’s all funny and absurd. There are a lot of dark and sad parts of the book, but the overall tone to me is if you want to present a band accurately, it has to be a comedy punctuated with wonderful music. You can’t be reverential to bands. Every band is a clown car.

Trigger Hippy will perform at High Noon Saloon on Wednesday, Nov. 13, with support from Pat Ferguson & The Sundown Sound.