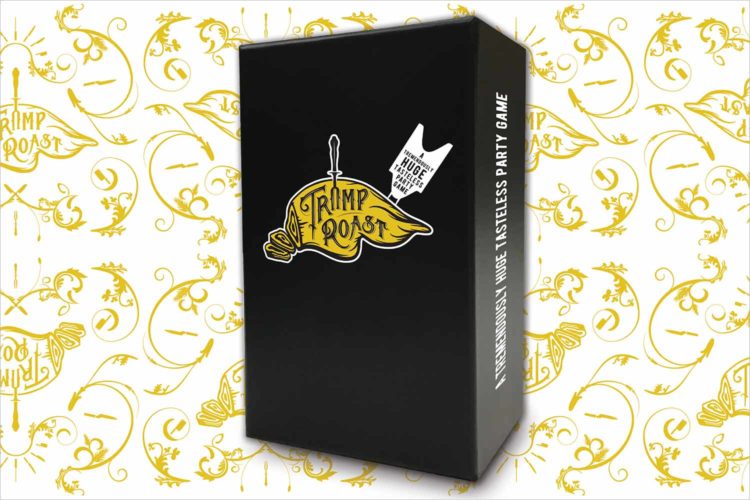 If the last few years have taught us anything, it’s that there’s nothing funny about Donald Trump.

Well, almost nothing. There are times when the spray-tan despot is honest-to-god LOL funny. This generally happens when the president says something he believes to be smart. “The best words,” as he once said. It’s the sort of tragicomedy you have to laugh at, lest you go insane. With his board game “Trump Roast,” Drew Mueske seeks to provide that outlet.

“We’ve got a celebrity that has bankrupted more businesses than most successful businessmen have even started,” says Mueske says (below, right). “It’s a wild scenario.” 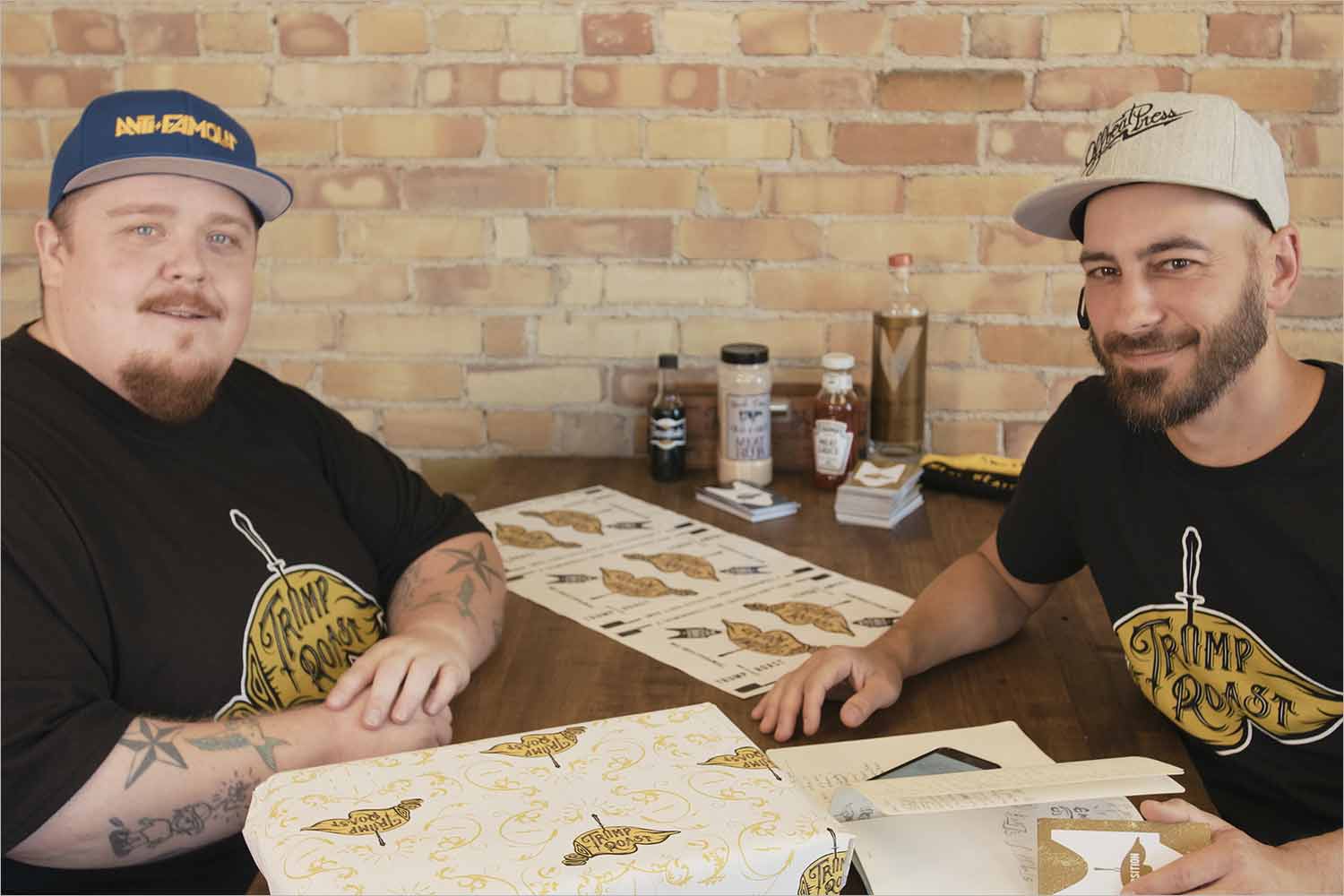 Trump Roast is a passion project for Mueske, an entrepreneur from Oshkosh and self-described progressive who’s been working on it since the 2016 election, with a little help from his friend, actor Adrian Mulloy (above, left). Similar to Cards Against Humanity’s format, players aim to match insane — and real — Trump quotes to “policy cards” like “What does Donald have tattooed on his lower back?”

Mueske has found that even the president’s most ardent supporters will occasionally admit that his words sometimes are not the best. “It’s been a huge surprise when real politics come out in the games we’ve played,” Mueske says. “Trump’s supporters are not, like, ‘I agree with the crazy shit he says.’ It’s more like, ‘He’s still my guy, but I don’t agree with all of it.’”

Incidentally, Mueske claims the majority of pushback isn’t from red hats but rather from gamers themselves. He is trying to secure funding through Kickstarter, in a campaign that ends late Friday, Feb. 28, but he’s had trouble gaining visibility within that website’s apolitical gaming community. Mueske says the only real review they’ve gotten is from the Madison-based Beer and Board Games’ YouTube channel (below).

As an avid gamer and fan of dunking on Trump myself, I spoke with Mueske about Trump Roast’s history, gamer backlash, and how the hell he got a sitting assemblyman to goof off in his Kickstarter video. This interview has been condensed for brevity and clarity.

How did the idea for Trump Roast initially come about?

It started around Thanksgiving 2016, so after the election and before the inauguration. I actually started making it within the first couple weeks. I had a couple versions that were scraps of paper I printed out. I’ve got a pretty dark sense of humor, so the questions were pretty dark. While a lot of my friends were kind of in mourning on the eve of the election, I was like, “This a joke.”

Some people thought it was funny and some were like, “This shit’s too real.” So I sat on it for a while. I played with it a little bit, but it sat in the basement. But after two-plus years of real politics, people started asking about it again. The goal then became that if I wanted to turn this into an actual game I could sell, it’s got to work for people across the political spectrum. We’ve played it with a few dozen Trump supporters who find the game to be pretty fun and entertaining. And then, you know, many dozen snowflakes. (laughs)

How did you strike the balance between putting your own views in the game and making it something a lot of people could play?

A lot of it came down to testing. Essentially you’re creating a fake political position to a ridiculous policy. But originally the policy cards were fairly real. He was a celebrity who had no political experience, and he’s trying to solve political issues where he doesn’t even know where some countries — or states! — are located. We’ve now redone the questions across the board that are just ridiculous for the policy card, like, “What does Donald talk about when Eric and Don Jr. pop his back pimples?” If you like Trump, you might not like that question as much, but you can still laugh at it.

It allowed people to have a chuckle coming out of the question as you’re looking at your quotes. And then, of course, we used the most ridiculous quotes across the board.

I think one thing everyone could agree on about Trump is that he’s said some really weird shit over the years.

He’s sought out media attention for decades. For whatever reason, he just craves media attention. He’s done whatever he can to get in front of the camera or on the news. And that’s really part of the reason why he won, but that’s a whole other sociology and news rabbit hole. 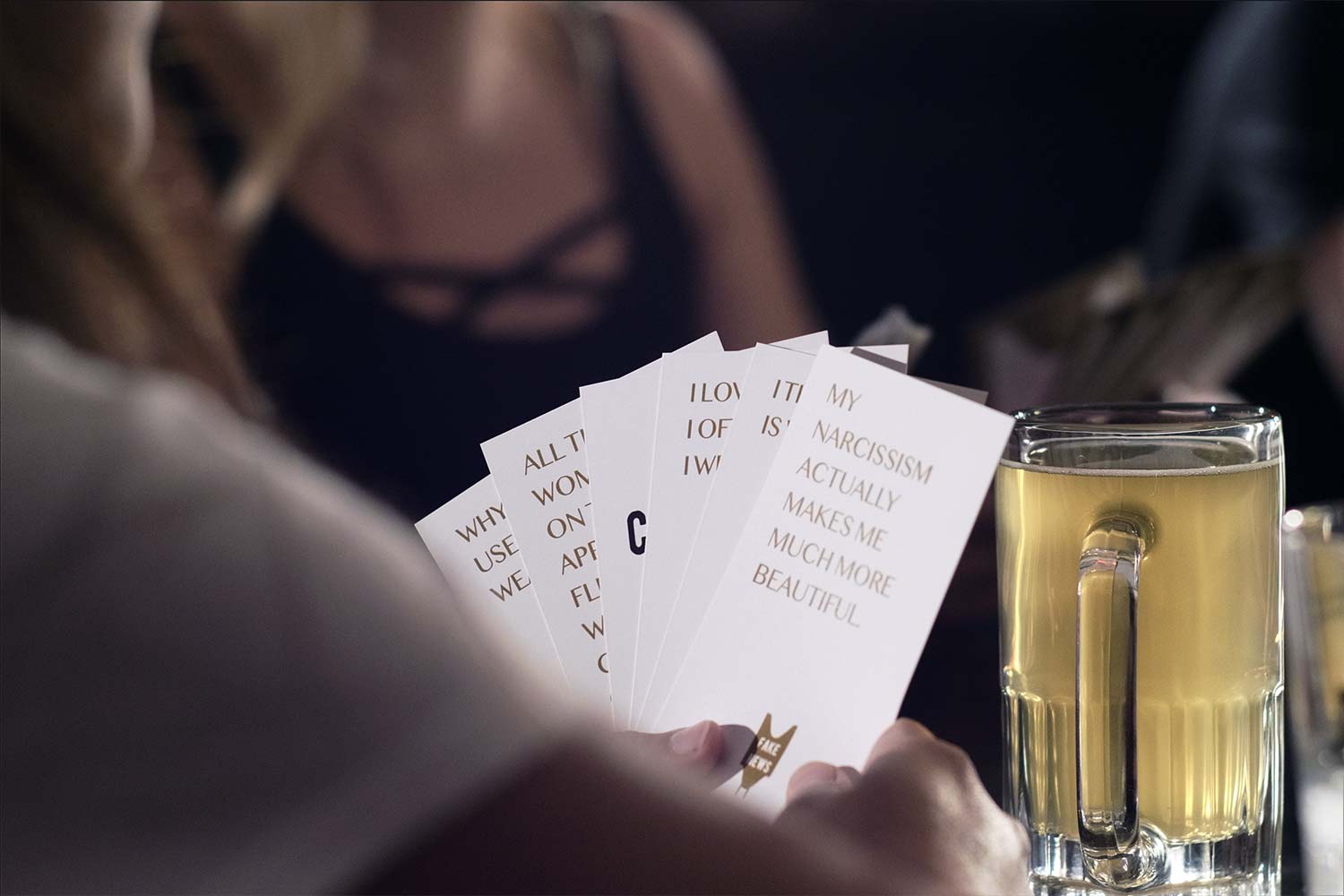 We’ve got a ways to go. It’s a whole different animal, but since I don’t have any game design experience, it made sense for me to start there rather than start my own gaming company. And there’s a huge gaming community on Kickstarter that gets into, like, deeply strategic fantasy games, which we are completely not. (laughs) And they’ve kind of shunned us. We’ve learned the gaming community hates politics. We’ve gotten turned down by dozens of game reviewers who say, “It looks like a really cool game. I’d be personally interested, but my audience hates politics.” But on the other hand, the people who have played the game enjoyed it because it really is apolitical.

I have to ask: how did you get State Assembly Minority Leader Gordon Hintz in your promo video?

Gordon is someone that we’ve known for a while. He is a talented fella in a number of ways, and fairly creative. He also happens to be my neighbor — he lives at the end of my block. So I figured he might be interested. He set aside about 45 minutes, but he’s a natural so that part worked out pretty well. We tried to make the video look like a short film while highlighting the game at the same time. We’ve definitely had fun doing it, but we still have a long way to go on Kickstarter to get the project funded.