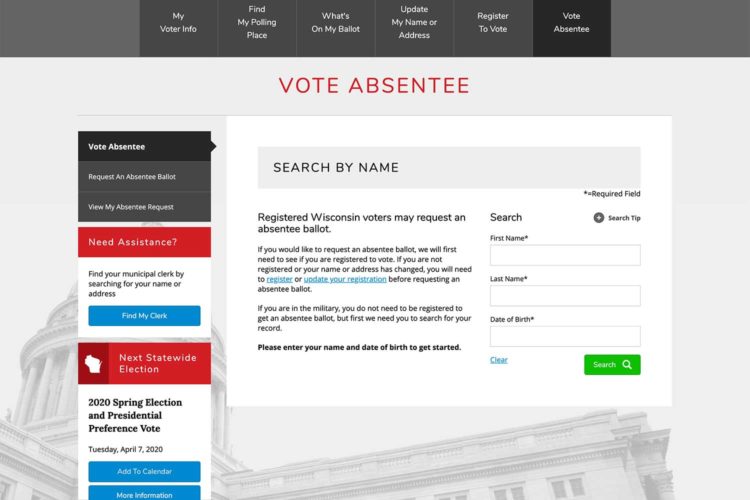 As of this writing, Wisconsin’s primary election is still scheduled for April 7. And unless Cool Guy Tony follows Ohio’s lead and postpones, people will be forced to go out and vote during a global pandemic. You know, the one where we’re being told to stay home as much as possible? Yeah, that one.

Add in the fact that a great number of polling places are staffed by senior volunteers and you’ve got a disaster waiting to happen. Voting is extremely important, yes. But another facet of democratic society is concern for the well-being of your fellow citizens.

So instead of creating any unnecessary risk, you should give some serious thought to voting absentee. It’s not just that it’s the socially conscious thing to do — after all, you don’t want to give someone’s nana the coronavirus. But it’s also super easy.

Just follow this link to start the process. From there, let’s go through step-by-step.

The first thing you’ll have to do is enter your name and date of birth. Easy, right? This will tell you whether or not you’re registered to vote. If you aren’t, you have until 11:59 p.m. on Wednesday, March 18 to register online. (Editor’s note: this deadline has been extended to March 30.) You can do that here. If you are registered, congratulations! You get to move on to the next step of this process.

The next part’s even easier — you’re just verifying the info you entered on the last page. You don’t even have to prove you aren’t a robot! 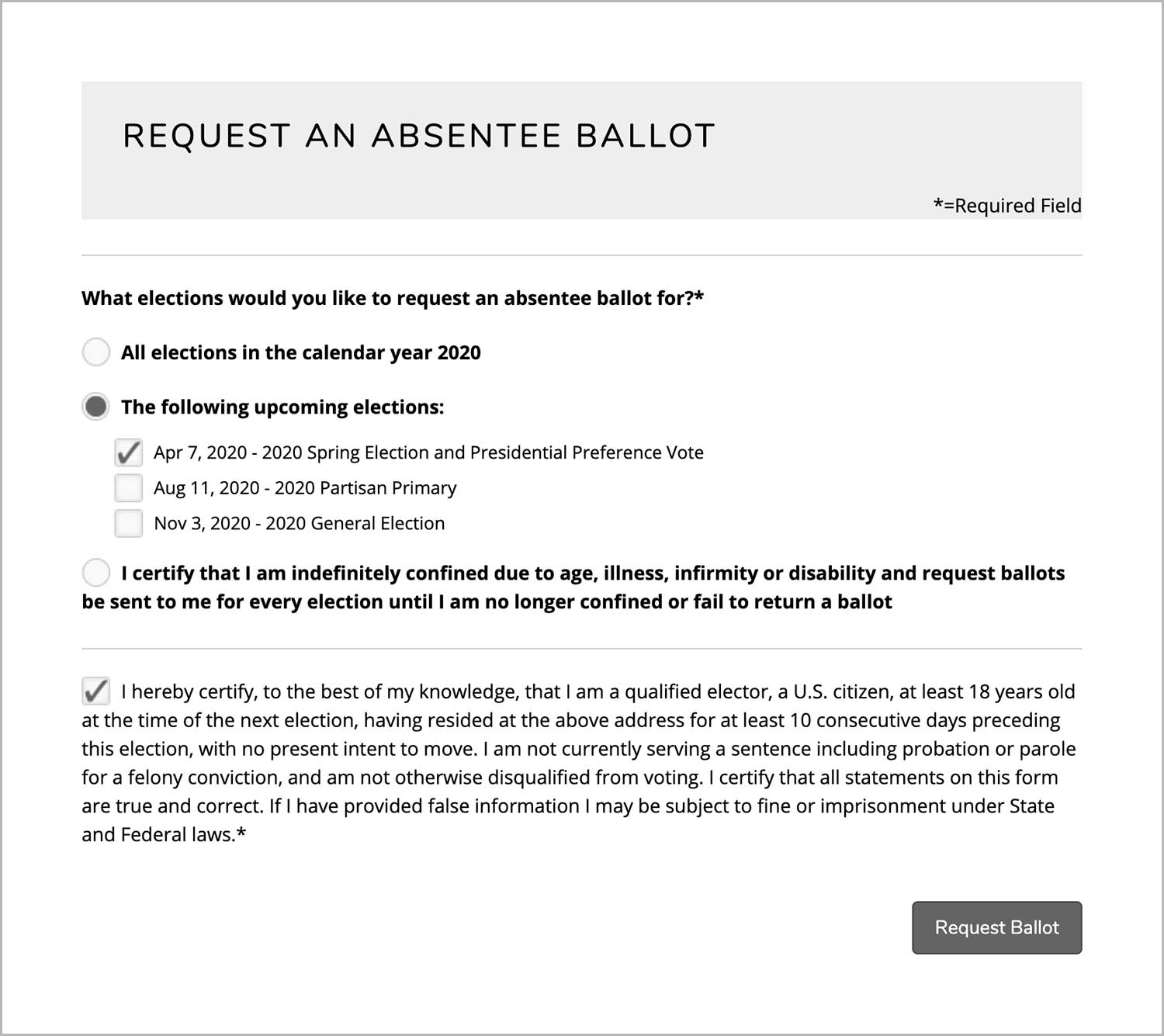 Now it’s time to pick which election you want a ballot for. As you can see above, I’ve selected just the April 7 primary because I’m optimistic I’ll be allowed out in public by August. But if you don’t share my attitude or would just prefer to keep voting absentee, you can do that too. 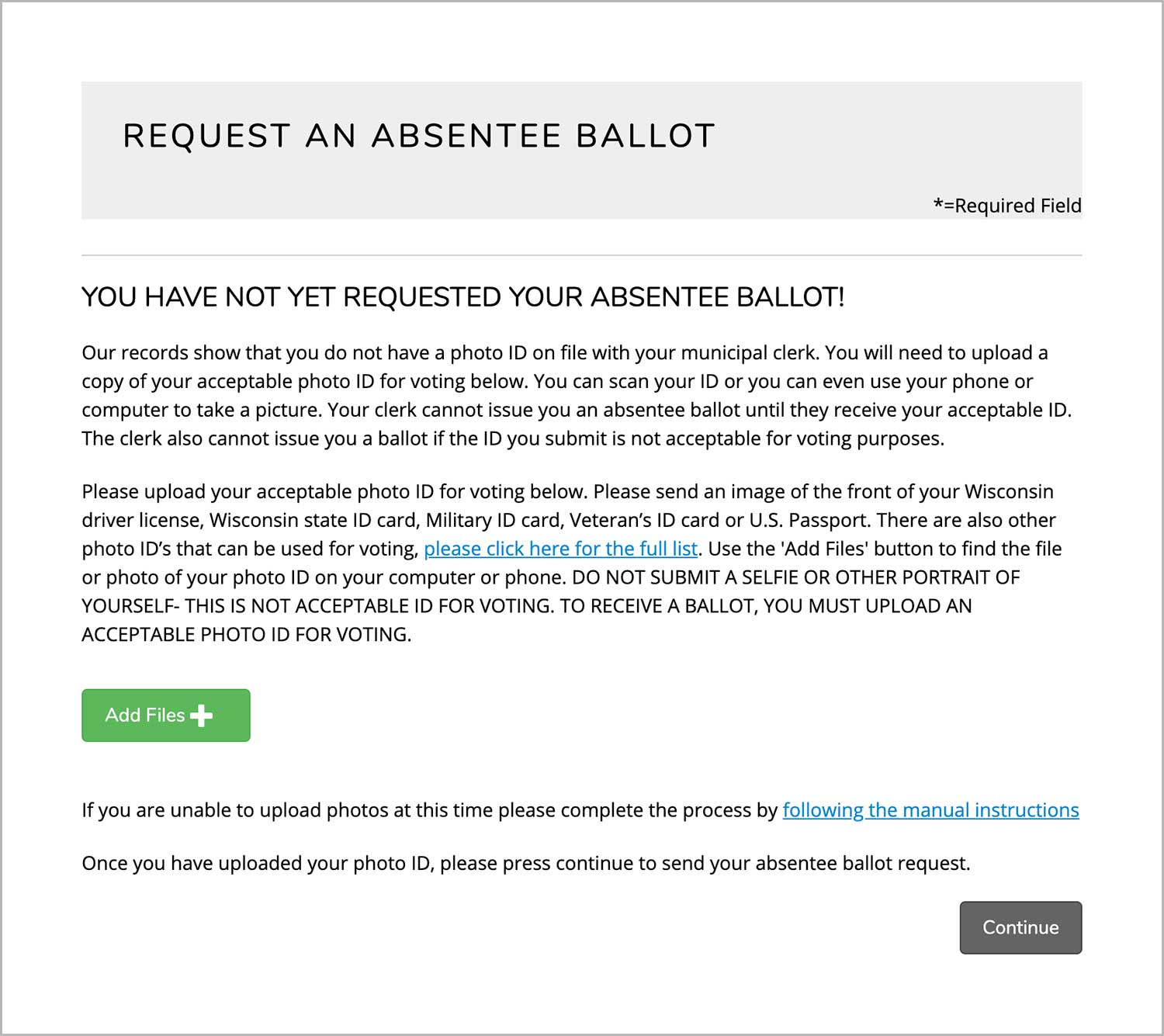 Now for the fun part: verifying your identity. (Assuming your municipal clerk doesn’t have your photo ID on file.) Upload a picture of an acceptable form of identification, such as a driver’s license, state ID card, military ID or passport. I used my driver’s license, but I won’t subject you to the dead-eyed photo of me that the nice DMV folks got when they took my pic.

It’s an anticlimactic success screen, but congratulations! Your mail-in ballot is on its way. Now you’re all ready to vote for Mike Bloomberg without leaving home. Can I get a “USA” chant in the comments?

So you don’t have to circle back to the top, here’s the link again to start the process.