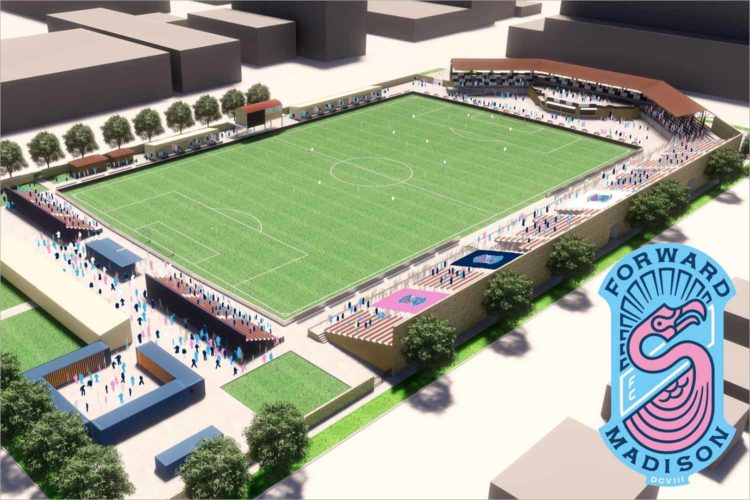 Over the summer, it was announced that Madison would be getting in on this whole “pro soccer” thing. Now, after a lengthy crowdsourced voting process, the team has a name, a schedule, and all the other trappings of a legit pro sports team.

Last month, team execs finally unveiled a name: Forward Madison FC, a safe bet that makes use of the state’s motto. With a pink and light blue color scheme, Forward Madison stands out amongst Wisconsin’s other teams — most of them utilize some form of green or red in their colors. But the pink isn’t just for kicks; it’s actually an integral part of the team’s logo.

Forward Madison makes prominent use of the pink plastic flamingo, which you probably know is the official bird of our gloriously weird city. The crest also features a dividing line that represents the isthmus, as well as the roman numerals for 608, Madison’s area code. As far as logos go, this one is pretty on point.

If you like the crest (which was designed by local firm Planet Propaganda) as much as I do, there are scarves, t-shirts and all sorts of cool stuff available at Forward Madison’s website.

But a team needs more than a sick logo to compete — it needs personnel. We already knew former Chicago Fire exec Peter Wilt was going to be leading the club, and over the past few months, Wilt has assembled an interesting cast of veteran soccer people. In September, Daryl Shore, a lifelong soccer man who has assistant coached both the Fire and Real Salt Lake in the MLS, was announced as Forward’s first head coach.

“We’re looking forward to becoming a part of the community and bringing a fun, attacking discipline of soccer to downtown Madison, where we can all enjoy soccer on the weekends,” Shore said at his introduction. Sounds very British, but OK.

Welcome to our first ever player – Don Smart! 🇯🇲 pic.twitter.com/4oRxV0oR2v

As for on-field talent, the Flamingos’ roster is starting to shape up just as well. Shortly after Shore came on board, players did too. Jamaican Don Smart became the team’s first signing in September, but recent additions of Brazilian MLS vet Paulo Junior and Panamanian national team star Josiel Nunez are even more exciting.

This is also the inaugural year for the United Soccer League One, Forward Madison’s league. And since USL1 is something of a farm system for the MLS, Forward Madison has lined up a partnership agreement with Minnesota United FC. The Loons will share scouting networks with the Flamingos, and they’ll also have the ability to loan developing prospects and starters rehabbing injuries to Madison. More still, an exhibition match has been hinted at.

We know the dates. Now we just need you to be there: https://t.co/TIDzN1uInU pic.twitter.com/k2ELNtSJCu

There’s nothing of that sort on the calendar right now, but the regular season schedule dropped only a few days ago. Of the team’s 14 home games, 12 are set for Saturday nights — so we can indeed all enjoy soccer on the weekends. Madison will open at Chattanooga on April 6 and make its Breese Stevens Field debut on April 27. The last home date is Sept. 22, with the season finale scheduled in Lansing, Mich. on Oct. 5.