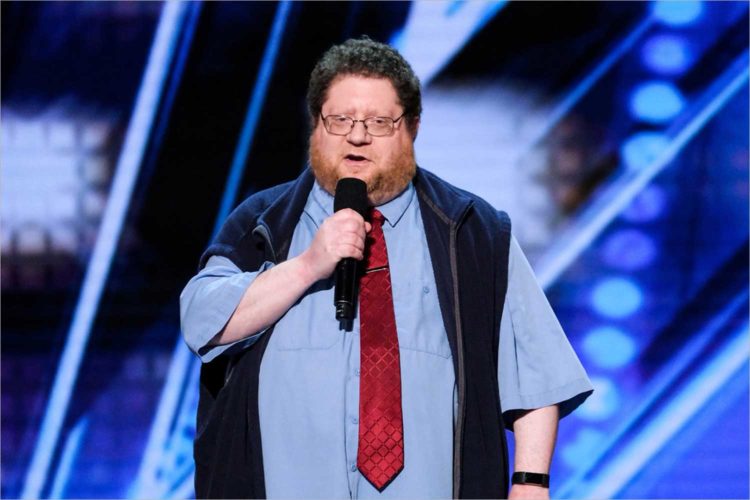 Madison comedy fans already know that Kevin Schwartz has got talent. Now, the rest of America gets to find out.

Schwartz, a longtime fixture at Comedy on State, made his America’s Got Talent debut on Tuesday, June 11. And the 49-year-old comic didn’t just pass his audition — he crushed it. Though he may have started out shaky, with each academic one-liner Schwartz would win over more and more of the crowd.

(My personal favorite: “I went to the grocery store. The sign said ‘no food or drink inside.’ So I went home.”)

But we know Schwartz is funny — he wouldn’t have been a runner-up in Madison’s Funniest Comic if he wasn’t. But what’s remarkable is the path that brought him to the America’s Got Talent stage. A brief AGT profile of the droll comic revealed a lifelong battle with crippling anxiety. At one point, Schwartz was diagnosed as agoraphobic. Though he was always interested in comedy, he had never tried it until a therapist suggested it.

“Fear has sort of ruled my life,” Schwartz said on AGT. “Comedy has been a way of trying to take back control.”

Initially, Schwartz’s therapist challenged him to go to Comedy on State’s open mic to write jokes. The next logical step was to actually get up on stage and tell those jokes. Schwartz was terrified to do it, but praised the supportive crowd at the club with helping him find his footing.

“People said, ‘I could see how scared you were, but you made it,’ which meant the world to me,” Schwartz said. Such support was evident on Tuesday at Robinia Courtyard, where Schwartz had posted up at the Madison Tap bar with friends to watch his audition on television. (See video above.)

Besides frequenting the club’s open mic nights, Schwartz has also opened for an array of touring comedians, from Rory Scovel to Al Madrigal to Brian Regan. Now, he can add being told he’s a star by Gabrielle Union to his list of accomplishments. And who doesn’t want America’s sweetheart Gabrielle Union telling them they’re a star? That’s A1 validation.

Yesss @KevinLSchwartz . You are a 🌟. Can’t wait to watch you shine. #agt https://t.co/e4qSDeHbbi

America’s Got Talent airs Tuesday nights this summer on NBC. You can follow Kevin Schwartz on Twitter @KevinLSchwartz.