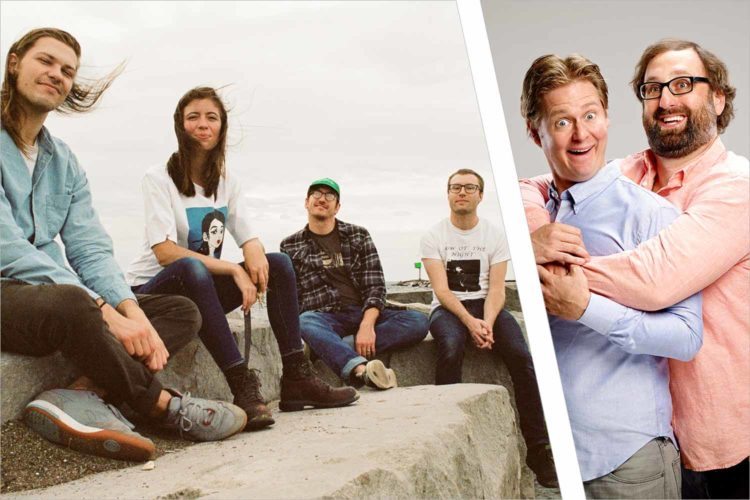 Ava DuVernay makes movies that you think about for days after seeing them. For example, 13th. The 2016 documentary explores the dark side of the slavery-abolishing amendment to the constitution, which DuVernay contends is still a legal mask for institutionalized racism via prison labor. It’s not an easy watch, but it is a necessary one. This screening will precede an open discussion about the film’s themes and impact.

Drawing from Alice Walker’s acclaimed novel and Steven Spielberg’s subsequent acclaimed film, the Tony-winning musical version of The Color Purple is every bit as good as its predecessors. It’s a clear-eyed view of the life of black women in 1930s America, doubling as a social critique and a heartfelt character study. I don’t think it’s hyperbolic to say The Color Purple is one of the most important works of fiction to come from the U.S. And now you can take it in with the added bonus of singing and dancing!

With the seemingly endless presidential election dominating the news cycle, it’s easy to forget there are other things we need to vote for. Like these nonpartisan primaries, for instance. Wisconsinites will make their choices for state Supreme Court justice candidates, as well as a host of other local and regional state offices. I couldn’t presume to tell you who to vote for, but I can tell you that incumbent judge Daniel Kelly was endorsed by Donald Trump. I’m sure Darth Vader and Lex Luthor will soon follow suit.

Southern Illinois native Kendell Marvel has enjoyed a long career in country music, most of which he’s spent as an in-demand songwriter. Over the years, Marvel has penned tunes for genre stars like Chris Stapleton and Jamey Johnson. Then in 2017, Marvel debuted on his own with the literate outlaw country throwback album Lowdown and Lonesome, a gritty, revelatory affair that marked Marvel as an impressive artist in his own right. His sophomore record, Solid Gold Sounds, arrived in 2019. With fellow country traditionalist Erin Viancourt.

If you grew up in southern Wisconsin at the time the General Motors plant in Janesville went under, the Oscar-winning and Obama-produced documentary American Factory may hit close to home. It takes a look at a Chinese company that bought and revamped a GM factory in Ohio, creating more than 2,000 jobs. But the working-class Americans and tech savvy Chinese soon found themselves at odds, leading to a whole new set of problems. Perhaps think of it as a prequel to the inevitable Foxconn disaster slowly brewing in the eastern part of our state.

After two weeks of grueling-yet-side-splitting competition, 25 comics remain. That means we’re drawing ever closer to finding out who the funniest person in Madison is. Apparently it’s not me, which… ouch. 10 comics will continue on Feb. 26.

Ska is pretty much a swear word in my household. My partner hates it passionately, but this hasn’t made me love it any less. And what’s not to love about bands like The Toasters? For this tour, the New York two-tone legends are celebrating their four-decade history and cementing their place in the genre’s pantheon. Not only did they bridge the gap from The Specials to The Mighty Mighty Bosstones, but they did so with serious chops. Keep an ear out for elements of everything from hip-hop to calypso in The Toasters’ sound. Joining will be a pair of Madison’s rudest (the good kind of rude!) bands, Meskales and Courtesy of Tim.

This Minneapolis alt-folker has a somewhat metaphysical approach to music. In addition to her emotionally dynamic songcraft, Greta Ruth is also a vocal coach with a deeply personal method — imagine a meditation guided by Angel Olsen. Basically, how can we use music to better understand ourselves? That’s the crux of Ruth’s work not just as an instructor, but as a songwriter in general. Support comes from Madison sample-smith Tarek Sabar and the improvised film scores of Milwaukee’s Wild Eagle High Five.

Janice Kaplan: ‘The Genius of Women’

It seems insane to have to say this: women can be geniuses too. But history has often pushed brilliant women aside — the present also! — thereby letting many of their great accomplishments go unheralded. Janice Kaplan’s new book The Genius of Women takes a look at some influential female eggheads like Frances Arnold and Fei-Fei Li, illustrating their legacies of discovery and the obstacles they faced as they made them. Kaplan, the former editor-in-chief of Parade magazine, will be on hand to discuss The Genius of Women.

Making strong statements on stage has never been an issue for Langston Kerman. Before his comedy career began in earnest, the Oak Park, Illinois native was a slam poet who both taught poetry to high schoolers and got an MFA in the art. Kerman has a natural comfort with words, and it bleeds into his comedy. His delivery is lyrical, each syllable perfectly placed in even the most random tangents. Kerman also co-stars on Issa Rae’s HBO sitcom Insecure.

Minneapolis band Barbaro is bringing bluegrass into the 21st century. Drawing in equal part from jazz, chamber music and indie rock, the quartet has designed a sound that’s singularly theirs. It sounds familiar, but it’s still something completely different. Their latest album, Dressed in Roses, was released in January. Madison Americana staples Pat Ferguson & the Sundown Sound will open.

If you thought Pinegrove had the market cornered on warm, country-tinged emo, you’d be sorely mistaken. Chicago’s Ratboys have a similar middle America twang, but chief songwriter Julia Steiner’s lyrics are much more playful and a whole lot funnier. For more evidence, check out “Alien with a Sleep Mask On,” the first single from the forthcoming Printer’s Devil. Local support will come from Madison indie pop outfit Combat Naps.

Up (no, not the devastating Pixar flick) is one of the most ambitious projects ever put on screen. Begun in 1964 by Canadian director Paul Almond and continued thereafter by Michael Apted, the documentary film series follows 14 British children every seven years from age 7 onward. 2019’s 63 Up is the ninth installment, checking in with the kids in their sixties. If you can steel yourself for a group of English boomers’ Brexit takes, the Up series always engages. It’s undoubtedly the most complete portrayal of growing up anywhere.

Shane Carruth’s ultra-low-budget mindbender Primer is one of those movies that you don’t leave the same as when you walk in. It’s a remarkably grounded story about time travel almost completely assembled by Carruth, a former engineer. (He wrote, directed, produced, edited, scored and starred in the 2004 film.) It’s one of the most technically dense sci-fi movies ever made, which is probably why all of my classmates at film school were so obsessed with it — and rightly so. Primer is a truly remarkable piece of cinema.

Friday through Sunday, Feb. 21-23, The Marquee at Union South (info)

While Parasite was my favorite film of 2019, Knives Out was an extremely close second. Written and directed by Rian Johnson, the ensemble piece follows a venomous, self-absorbed family dealing with the death of its patriarch. It’s a comedy, by the way, and Daniel Craig plays a private eye with a spectacularly over-the-top southern accent. (His character is getting a sequel and I am 100% in for it.) But the extremely famous guy better known as Bond, James Bond is hardly the star of Knives Out. The real hero is Chris Evans’ cable-knit sweater. If I wasn’t such a Brad Pitt stan, I’d say the sweater should have won the Oscar for Best Supporting Actor.

Dorian Electra seems to have stepped out of a time machine from the future and directly on stage. The Texas native and Charli XCX collaborator specializes in a funky, futuristic take on pop music that satirizes gender constructs. In Electra’s world, where we’re going we don’t need (gender) roles. Their debut album, Flamboyant, was released in 2019. With performance artist and musician Alice Longyu Gao and Madison’s DJ Boyfrrriend.

I remember flipping through an issue of Spin as a high schooler (so 2005-09) and seeing a picture of garage rock sleaze lord Nobunny performing in a rabbit mask, briefs and nothing else. As an impressionable teen, it was one of the most rock ‘n’ roll things I’d ever seen. But that’s fitting for Nobunny, whose anarchic live shows see the artist born Justin Champlin deliver high energy sets of grimy punk informed by rock’s nascent 1950s era. (And for a local connection, Nobunny’s touring band occasionally features Bobby Hussy on guitar.) There’s a veritable all-star squad of local support here, including Hussy’s own Fire Heads plus Solid Freex and Heather the Jerk.

Helmed by Predator actor Bill Duke, 1985’s The Killing Floor tells a story that’s unfortunately still pretty relevant. Set against the Chicago Race Riot of 1919, the film follows Frank (Damian Leake), a young, black farmer who relocates to Chicago from the south in hopes of more progressive race relations. He gets a job at a meatpacking plant and soon finds that the Windy City is still rife with racism. But when Frank becomes involved in the creation of one of the country’s first interracial labor unions, he begins taking steps to fight back. The Killing Floor also stars Oscar nominee Alfre Woodard (Cross Creek) and hall of fame swearer Dennis Farina.

This city loves food, so it shouldn’t take much persuading for you to go out and eat. But here you’d be filling your face for a good cause! Femmestival celebrates the ingenuity of “womxn, femmes and nonbinary artists and producers.” A wide array of vendors will offer food and drinks while artists Sonja Thomsen, Jennifer Bastian and Luisa García-Gómez exhibit their work. Proceeds will go to Centro Hispano and the Culinary Ladies Collective.

I don’t think it would be wrong to call Tim Heidecker and Eric Wareheim the most influential comedians of the new millennium. Their surreal aesthetic is stamped all over modern comedy, and will be on full display in their upcoming new Adult Swim series Beef House. It’s a riff on the TGIF sitcoms of the 1990s, delivered through the pair’s warped lens. (Remember Too Many Cooks? I’m imagining that, but as a whole series.) In Tim and Eric’s world, a joke doesn’t have to make sense to be funny. In fact, the less tethered to reality it is, the more hilarious it will be.