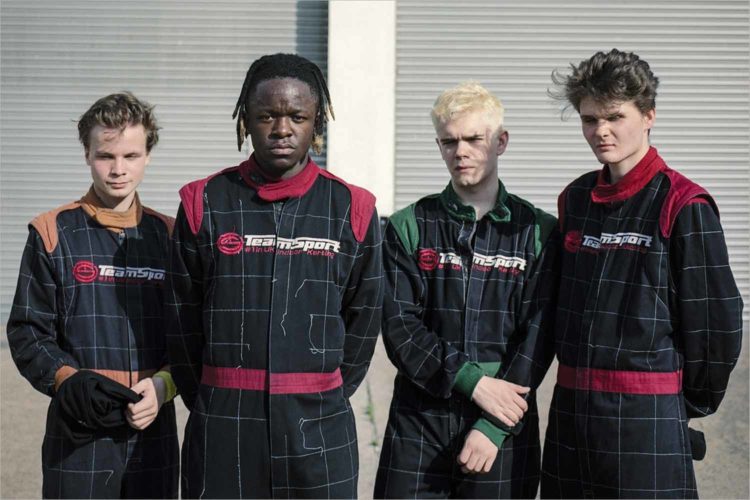 ‘The Way Way Back’

When you’re a moody teenager, anything can seem like a bummer — even spending the summer at a beach house. At least that’s the case for Duncan, who escapes his family by getting a job at the local water park. There, he finds a role model he needed in park manager Owen. Over the course of the season, Duncan learns important lessons about life and love, and presumably that water parks are disgusting germ factories.

This month’s installation of funk and soul revue Cupid Tuesdays will explore the music of Stevie Wonder. So whether you’re a Talking Book stan or a Songs in the Key of Life devotee, Don’t Mess with Cupid will likely have you covered. (Or, they could play nothing from either of those albums and I’d look like a big ol’ idiot.)

From Blur to Bloc Party, the U.K. has always been a reliable source of great guitar rock bands. The latest in that tradition is black midi, a rising London-based quartet. Their kinetic post-punk draws inspiration from across the musical spectrum, from Danny Brown to Mahavishnu Orchestra. And it’s on display in their debut album Schlagenheim, which is as emphatic a thesis for the group as you’re bound to find. With Madison’s own grungy shoegazers Wash.

Durham, N.C.’s Wailin Storms have serious street cred. I mean, you don’t get to record with the legendary J. Robbins (who also fronted the crucial ’90s band Jawbox) without it. And if the band’s work with Robbins is anything like Wailin Storms’ prior output, be ready for more righteously gloomy post-punk. Also appearing is Madison’s mathy post-hardcore experts Hex House and Our Friends, the Savages.

Concerts on the Square: Abbey Road

You’ve heard The Beatles, unless you’re a character in Danny Boyle’s Yesterday. But have you ever heard the Fab Four as played by a full orchestra? The MCO is marking 50 years of the band’s Abbey Road by playing selections alongside Jeans ’n Classics, an orchestral group dedicated to updating classical music with a rock and pop twist.

Undoubtedly, this is the most quoted of the Mad Max films: “Two men enter. One man leaves.” That’s the ominous disclaimer for the Thunderdome, a gladiatorial arena where Max Rockatansky finds himself forced to fight for his life. This is the craziest out of all the Mad Max films. The villain is Tina Turner. A bunch of kids think Max is their god. Nothing about this is normal. It is, however, very entertaining.

Despite the members of Murder by Death probably being lovely people, their music sounds sinister. A lot of that has to do with Adam Turla’s baritone vocals, which sound tailor-made for the soundtrack of whatever is David Lynch’s latest nightmare fuel. That said, Murder by Death shows are highly intimate — the band is beloved by its fans to the point of feeling like extended family. If you’re lucky, maybe they’ll even give you something really spooky.

One of Wisconsin’s greatest songwriters returns to Madison, bringing his brand of clear-eyed empathy. So far the Milwaukean’s 2019 has been busy, taking him across the planet in support of his latest album, Primetime Illusion. Produced by Wilco’s Pat Sansone, it finds Schoepp displaying an easy confidence in his songcraft. At this point, it seems effortless for Trapper. Also visiting here from Brew City is Nineteen Thirteen, a new project from Violent Femmes drummer Victor DeLorenzo.

Maybe this is my love of Huey Lewis and/or The News talking, but the saxophone is an underused instrument in rock music. But thankfully, Roscoe & The Talent is bring saxy back. The Madison band plays a laid-back blend of pop-rock that fans of Real Estate would love, albeit with more of that sweet, woodwindy goodness. Saxophone forever. And the whole show will be full of off-kilter rock: White Bush Unicorn and Educational Davis will also appear.

Dance parties are great and all, but they can also be a major source of sensory overload: Crowds, strobing lights, loud noises, and a disconcerting amount of sweat. For Hush, Crucible is flipping the script. It’s a low-sensory dance party, with “lower sound volume and (a) chill atmosphere.” Music comes from DJ Umi and DJ Ellafine. Introverts to the dance floor.

Let’s friggin’ cry about it: Cathartic songs and their stories

Several local musicians will share the stories behind some of their most intimate and personal songs. Fair warning: If you’ve got a hang-up about crying in public, you’re going to have to get over it for this. Performances will come from Chloe Louise, Allison Ekyholt, Woodrow’s Conor Brennan, Suko, and Nate Meng of Nate Meng & The Stolen Sea. Tissues not included.

Vendors and artisans from across the state will offer everything from artwork and jewelry to so so much good food. This is the second-to-last Bodega of the season, with the final scheduled for Aug. 22. Get your calendar in order or be stuck waiting until next summer.

James Davis likes to call himself “hood adjacent.” In fact, he had a show on Comedy Central called Hood Adjacent with James Davis, in which he explored his cultural split personality further. Yes, he was born in South Central L.A., but he grew up tempering that with his time at a private high school in Santa Monica. It’s the bedrock of Davis’ stand-up, too. And he’ll do a much funnier job of explaining it than I am.

At this point, all you should need to hear to be sold on a horror film is “directed by John Carpenter.” In The Fog, the visionary behind Halloween and The Thing heads to a fictional coastal town in California, where a mysterious and dense fog is terrorizing the locals. It’s also Carpenter’s second film to feature all-time scream queen Jamie Lee Curtis — and first to feature her mother, Psycho star Janet Leigh. It’s like a horror all-star team.

Unfortunately, Madison’s relationship with rap over the years has been adversarial. Despite the city’s hand-wringing, there are still a lot of talented rappers in the greater Madison area. Here, you’ll get the chance to see a handful of them perform. Willie Wright, Bang, Chris Jewson, Bob Da Hippie, Ms Lector, and TG will all compete for a chance to perform at the MAMAs.

DJs Mike Carlson and EMC are pitting two fantastic musical decades against each other: the ’80s and ’90s. A huge swathe of music will be covered, “from Whitney to Britney,” with each song accompanied by its video. It’s basically like MTV, if that channel still played music videos instead of exploiting pregnant teenagers. So really, it’s better than MTV. (At least as long as they play this unintelligible banger. #Team90s.)

I have no doubt that if they had formed in the early 1990s, Heavy Looks would be world famous. With Weezer’s fuzzy guitars, The Cranberries’ airy vocal melodies, and even elements of third-wave ska, the Madison quartet represents everything that rocked about that decade. (Yes, ska rocked.) They’ll be playing here in support of local punks Fire Heads and Arkansas jangle rockers Mouton.

There’s no shortage of summer festivals in Madison. But for music lovers, few are as essential as AtwoodFest. And once again, the fest’s organizers have put together a killer lineup. Two dozen bands will perform on three stages, including local favorites like Immigre, VO5, Rare Element, WURK, Steely Dane (a tribute to Steely Dan) and Better Yeti.

She may now call Nashville home, but Josie Dunne is neither “yee” nor “haw.” Instead, the rising pop star is a mixture of classic Motown and soul. It recalls a simpler time, an image she illustrates literally in the video for her song “Old School,” which was filmed at her childhood home in La Grange, Illinois. Support comes from another pair of North Illinois natives, Freeport’s (and now Madison’s) Seasaw.