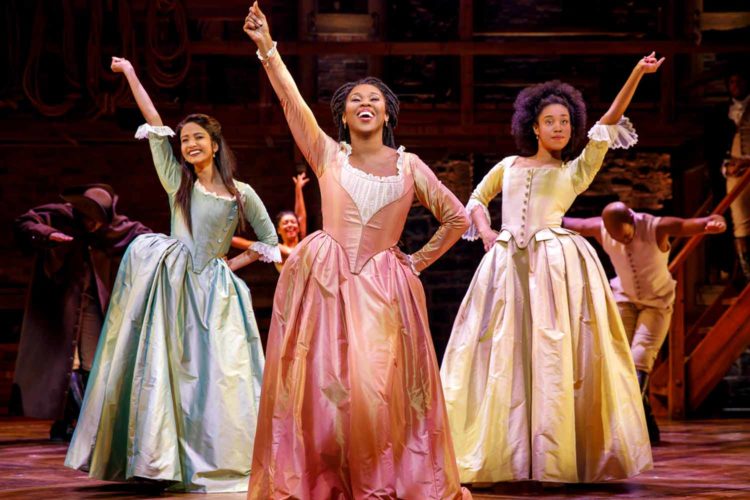 Mondays tend to fill me with a boundless rage that needs to be pointed somewhere. So what better way to take out some of that aggression than windmilling at a kickass metal show? Exhumed is a legendary grindcore band from California, having existed since 1990. They’re brainy and brutal, packing critiques of American consumerism into their often gory lyrics. It’s not for the faint of heart, but it’s also death metal at its best. The stacked bill also features Arizona doomsayers Gatecreeper, California punk/metal hybrid Necrot, Texas-based thrash hardcore outfit Judiciary and Madison favorites Ruin Dweller.

Finally, America’s favorite hip-hop history musical makes its way to Madison. Lin-Manuel Miranda’s Hamilton is near-universally beloved and sells out everywhere it goes. It’s the story of statesman Alexander Hamilton, from his youth in the West Indies to his distinguished career as one of the founding fathers of the United States. Hamilton won 11 Tonys and helped launch the careers of Miranda, Daveed Diggs, Leslie Odom, Jr. and Jonathan Groff. Performances continue Tuesday through Sunday, Nov. 26-Dec. 1 (except Thanksgiving Day) and Dec. 3-8.

If you’re a regular reader, you’ll know my love of thrifting. This means Adam Minter’s book Secondhand is right up my alley. It explores secondhand shops around the world, from the U.S. to Japan to Ghana. All the while, Minter explores the social and ecological implications behind our excess of used stuff and what we can do to make room for it. Minter will be on hand to discuss his own travels amongst the planet’s unwanted junk.

Having performed with everyone from Jane’s Addiction to Umphrey’s McGee to the late Mac Miller, The Main Squeeze is adaptable. The Indiana-based group combines rock, funk and blues into a party-hardy sound. This is the type of band you’d want to book for your next rager, but do invest in some insurance before they blow the roof off your home. Joining also from Bloomington will be jamtronica group Dizgo.

‘The Image You Missed’

We’re at a point in history when many of our own relatives have been radicalized by political rhetoric. Dónal Foreman’s The Image You Missed explores this concept by repurposing documentary footage shot by Foreman’s dad during The Troubles in Northern Ireland. But rather than dwell on the atrocities, Foreman looks at how movements like this can affect familial relationships. The film plays more like a conversation between the director and his estranged father than a straight-on documentary.

The Ghost of Paul Revere

Portland folk trio The Ghost of Paul Revere became history in their home state of Maine this year. Their song “Ballad of the 20th Maine” was named the state’s official ballad, since it lyrically honors a Civil War regiment. It’s fitting, since the band’s classic folk stylings recall that era of American history, back when history was kept through song. The Ghost of Paul Revere’s most recent full-length, Monarch, was released in 2017. With Animal Years, a Brooklyn Americana trio whose name comes from a Josh Ritter album.

Kansas five-piece Carrie Nation & The Speakeasy are, for the most part, a folk punk band. But there’s enough bubbling under the surface to make you reconsider that classification. There’s elements of bluegrass, rockabilly and ska at work, offering a diverse take on American music. You’d think ska and folk wouldn’t work together, but they really, really do. The band’s most recent album, Gnosis, arrived last year.

There’s a great chapter in Shea Serrano’s new book, Movies (And Other Things), in which the Ringer writer and best-selling author discusses actor Michael B. Jordan. Specifically, Jordan’s ability to emotionally devastate you in just about every film he appears in. And Just Mercy is a perfect example. Based on a true story, it stars Jordan as lawyer Bryan Stevenson as he works to get a wrongly accused man (Jamie Foxx) off death row. Just Mercy is directed by Destin Daniel Cretton and also stars his Short Term 12 lead (and my eternal crush), Oscar-winner Brie Larson.

With Pet Names, Wisconsin director Carol Brandt finds a sense of poetry in her home state. Shot in the leafy greens of a Midwestern summer, the 2018 film follows a young post-collegiate as she seeks purpose while caring for her sick mother. But when a chance encounter with an old flame leads to a camping trip, Leah is forced to reckon with the state of her life and where it goes from there. Brandt will be in attendance for the film The Hollywood Reporter called “lovely and sardonically unsentimental.”

Hari Kondabolu makes comedy for smart people. He’s got a master’s in human rights, and his jokes are as enlightened and informative as they are funny. And Kondabolu is extremely funny, taking aim at everything from devil’s advocates to Weezer. Hari might be the only comic who could teach you something while making you laugh until you cry. And he’s clearly got some love for Madison, recently showing off his Majestic hoodie while hanging out with Trevor Noah.

One of Mexico’s greatest exports — besides their incomparable take on Coca-Cola — is instrumental duo Rodrigo y Gabriela. Since 2000, the group has been the most prominent Mexican act in indie rock. Their folky sounds are tempered by a wide array of influences, from flamenco all the way to heavy metal. They’re difficult to compare because there isn’t really anyone else who sounds like them. No wonder Obama invited them to perform at The White House in 2010. Their latest album, Mettavolution, dropped in April. With Ida Mae, not one person but a pair of Brits who play American roots music as well (if not better) than any Yank.

Show Me the Body

Hardcore is a genre full of angry dudes playing fairly straightforward, extremely loud music. And that’s what makes New York’s Show Me the Body such an intriguing case. Like many of their forebears, their music is politically charged. But the trio’s in-your-face progressiveness and tendency to experimentation make them a truly exciting force in their genre. I mean, really: how often do you hear banjos at hardcore shows? Imagine if the Beastie Boys never pivoted to rap after their early years in New York’s punk scene. That’s Show Me the Body in a nutshell. Their second album, Dog Whistle, was released in April.

File this one under post-post-punk. Night Water, the solo project of New Orleans musician Travis Bird, challenges the generally accepted norms of his genre through dynamic guitar work and exploratory song structures. It’s experimental without feeling untethered. Also appearing is Madison’s Julian Lynch, the Real Estate guitarist who also loves to play around with atypical soundscapes, and another local experimentalist, William Z. Villain.

I’m a sucker for a great band name, and “Ringo Deathstarr” is incredible. But their awesomeness doesn’t stop there. These Austin-based musicians are underground legends, playing psych-gaze that hangs over the listener like a sonic cloud. Joining them will be fellow ATXers Blushing, who play a dreamy take on art pop. And come out early to catch a pair of local favorites: Madison’s Fire Heads and Minneapolis’ Cult of Lip (who play around here often enough that I’d consider them honorary citizens).

‘The Art of Self-Defense’

Jesse Eisenberg is a super versatile actor, able to go from unthreatening and funny to downright creepy with a facial expression. The Art of Self-Defense is a perfect showcase for that ability. In this 2019 black comedy, Eisenberg plays Casey, a meek man who enrolls in martial arts classes after getting jumped. However, he soon learns his class’ efforts to impress their mysterious Sensei (Alessandro Nivola) will often push them to brutal extremes. Think of it as a darker version of Danny McBride’s cult comedy The Foot Fist Way.

This 1997 drama film is a classic for several reasons. One, it introduced the world to the writer/actor team of Matt Damon and Ben Affleck, who won an Oscar for their screenplay. Two, it was one of the finest performances of Robin Williams’ career. (The “not your fault” scene will never fail to destroy me.) And three, it’s really good. For those not hip to the plot, it’s about a Harvard janitor/secret math genius (Damon) who’s charting his future while living in Boston’s rough and tumble Southie neighborhood. How do you like them apples?

Sometimes you can tell when an artist is meant for big things. The Marcus King Band is one of them. Led by a 23-year-old bluesman, the group has exploded onto the roots music scene with their shit-kicking combination of soul, blues and rock ‘n’ roll. From Otis Redding to the Drive-By Truckers, the south’s great musical traditions are all present in The Marcus King Band. Their third album, Carolina Confessions, was released in 2018. Support comes from country rocker (and one-time Drivin’ N Cryin’ member) Aaron Lee Tasjan.

Declan Patrick MacManus — or as he’s more commonly known, Elvis Costello — may not look “punk,” but he’s still the most punk rock dude ever. He was banned from ‘Saturday Night Live’. One of his biggest hits is a blistering screed against British colonialism. And just this year, he tried to turn down an Order of the British Empire appointment only to be convinced otherwise by his mom. That rebel spirit carries over to his music, and even into his sixties Costello is still outpacing artists half his age. I would know: I was there the last time he played Madison.

Cristela Alonzo’s eponymous ABC sitcom only lasted one season, but it still made history. The 40-year-old comic was the first Latina to create, produce and star in her own show, loosely based on her life. And those life experiences make up the lion’s share of Alonzo’s stand-up, which is widely relatable without losing its distinct cultural identity. This performance will double as a book-signing — Alonzo will autograph copies of her new memoir Music to My Years.