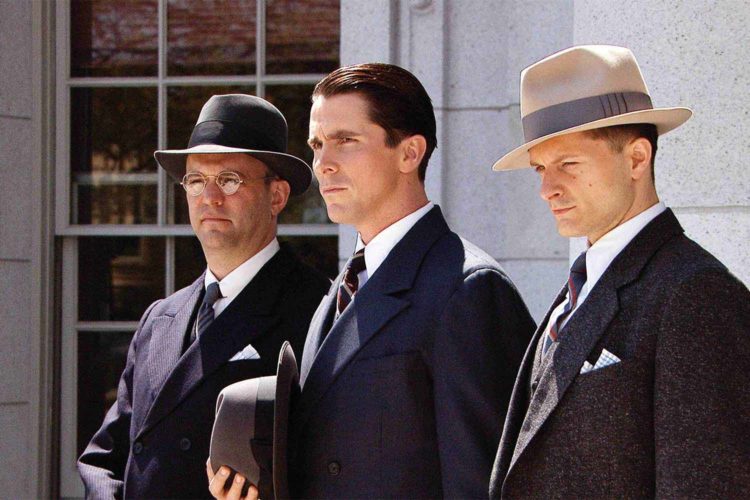 Unless you’re from New York or L.A., when your town appears on the big screen, it’s kind of a big deal. In a recurring series, we aim to revisit the times Madison has gone Hollywood. Last time, it was 1994’s I Love Trouble.

Next up is Public Enemies, Michael Mann’s 2009 biopic about infamous bank robber John Dillinger, starring human meme Johnny Depp and released nine years ago this month. Rounding out the main cast are Christian Bale and Marion Cotillard, a pair of Oscar winners and eventual The Dark Knight Rises co-stars. And for bonus street cred, Mann is a UW graduate.

While much of the film is set in Chicago, a great deal of Public Enemies was also produced in the Badger State, including a few scenes right here in Madison. Many of Dillinger’s real life crimes did take place in the Upper Midwest, and some of those actual locations feature in the film, including the Little Bohemia Lodge in Manitowish Waters, scene of an infamous shootout between Dillinger and the FBI.

Basically, Public Enemies is less about John Dillinger than about the efforts of Bale’s FBI agent Melvin Purvis to catch the infamous criminal. Cotillard fits in as Billie Frechette, a nightclub singer (and Wisconsin native!) who serves as Dillinger’s love interest. And the rest of the cast is filled with recognizable names in bit parts, including Billy Crudup, Channing Tatum, Jason Clarke, Giovanni Ribisi and Carey Mulligan.

Soon after the film’s 16½-minute mark, our Capitol building makes its first appearance during a scene in which FBI director J. Edgar Hoover (Crudup) gets roasted by a Senate committee over the bureau’s hemorrhaging of money in the search for bank robbers.

We then follow Hoover through the building, getting a nice view of the main atrium. In Public Enemies, the Wisconsin State Capitol has the distinction of being the source of both interior and exterior shots for FBI HQ.

Next is a side-trip to Hoover’s office, just in time for a quick walk-and-talk with Agent Purvis, whom Hoover promotes to Special Agent in Charge of the Chicago field office.

Lastly, we see Hoover introduce Purvis to the press corps outside the Capitol…

…where we get a reverse shot that includes several recognizable Madison buildings (including, whoops, Quiznos if you look closely).

Those few minutes are about the extent of Madison’s role in the film (though nearby Columbus served as the setting for an Indiana robbery). But for as small as it was, people were pretty stoked on it. As was the case with I Love Trouble, Public Enemies brought one of the biggest stars in world to Madison in Christian Bale. At the time, Bale had just reprised his role as Bruce Wayne/Batman in The Dark Knight, a billion-dollar success that solidified Bale not just as one of his generation’s finest performers but as a genuinely bankable movie star.

During filming, huge crowds of people would show up for even the most fleeting glimpse of the actor. Meanwhile, poor Billy Crudup went largely unnoticed (which is a damn shame, as Crudup is one of the most quietly consistent actors working today; I see you, Mr. Golden God!)

Unlike I Love Trouble, however, with Public Enemies people were actually able to play a part in the film. Well, at least their cars were: Many of the classic vehicles used in the film were owned by Wisconsin residents, and many of them were outfitted with costumes to drive their own cars in the film as well.

But perhaps Public Enemies’ lasting legacy — besides being one of the last times Johnny Depp didn’t completely phone it in on a movie — was the gigantic boondoggle surrounding tax breaks here in Wisconsin. As an incentive to bring major films to Wisconsin, the state offered a 25% tax credit, meaning that one-quarter of everything a production spent in the state would be paid back. Ideally, this would create a surge like what’s happened in Georgia.

However, Wisconsin ended up paying back NBC Universal (the company that produced Public Enemies) about $4.6 million of the $5 million spent here, as the whole “tax incentive” program had barely even been workshopped at the time, leading to confusion across the board as to how exactly to deal with major production companies.

Or, as then-State Commerce Department official Zach Brandon said at the time: “It’s a wash.” Wisconsin eliminated the tax credit incentive in 2013, largely because of the experience with Public Enemies.

Money woes aside, Public Enemies is actually a pretty good film. It’s not a masterpiece by any stretch, but it has a flashy, freewheeling aesthetic. And paired with solid performances from its three leads, Public Enemies does hold up for repeat viewings. As for its impact on Wisconsin’s film industry, I ask: “When was the last time you saw Batman in the Badger State?”