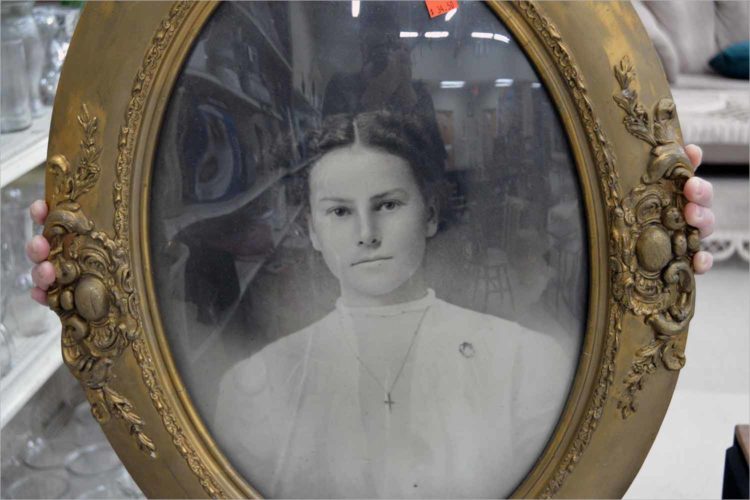 In my experience, the St. Vincent DePaul on Willy Street is a great place to find odd shit. That’s fitting, given the offbeat neighborhood it calls home. It’s also a great place to score used vinyl; I’ve found records by Bruce Springsteen, Fleetwood Mac and Stevie Wonder. This trip proved to be fruitless search for wax, but St. Vinny’s made up for it with everything else.

(Also, find out how you can donate here.) 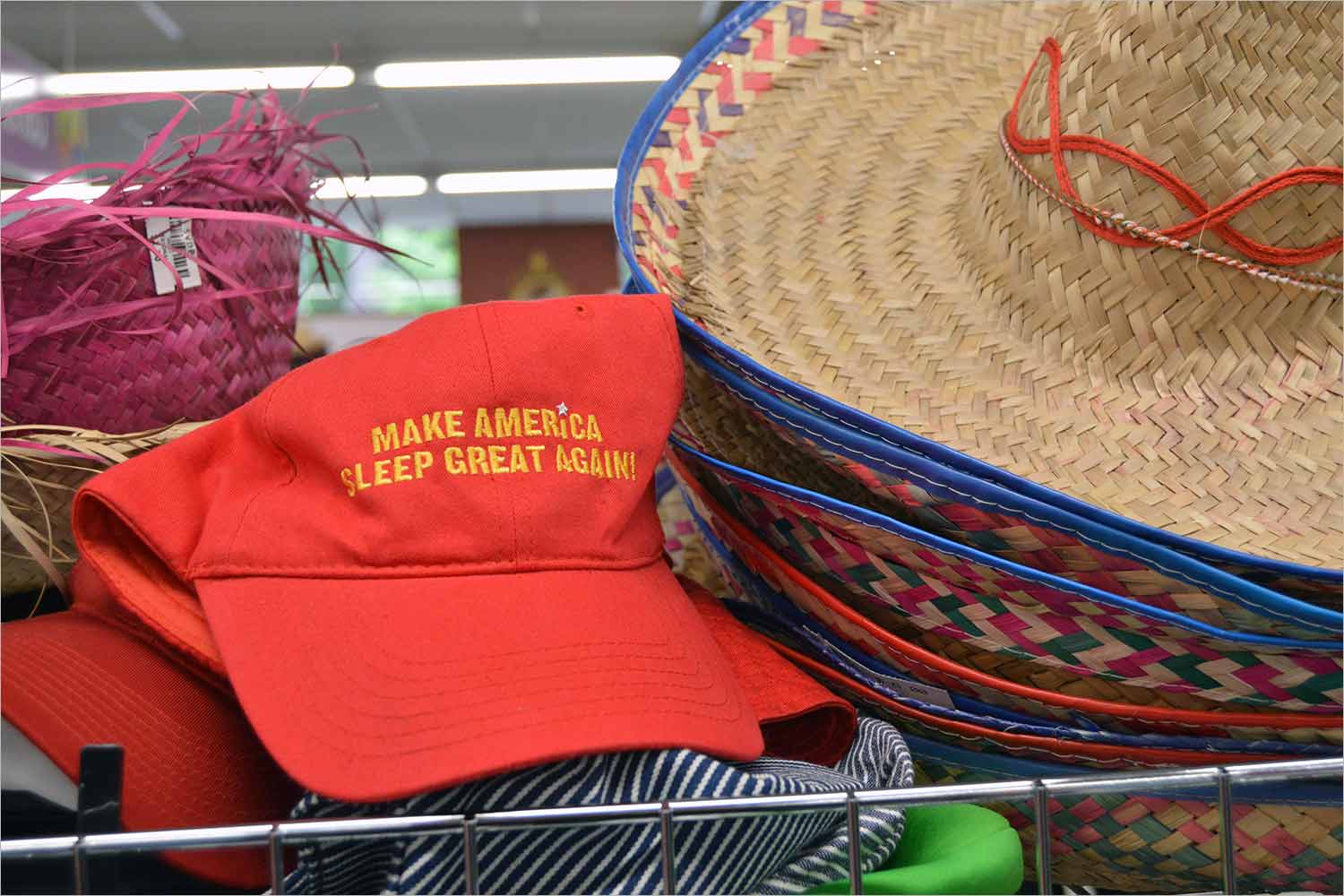 I was wary about this one, because it’s easy to make fun of Donald Trump but it’s also A) low-hanging fruit and B) less and less humorous every time his administration does something monstrous. But the placement of this hat, a promotional item for Tempurpedic, was too perfect to pass up. It was right next to a pile of sombreros. Either someone at St. Vinny’s has a good sense of humor, or even the universe can’t resist an opportunity to clown on the big baby president. 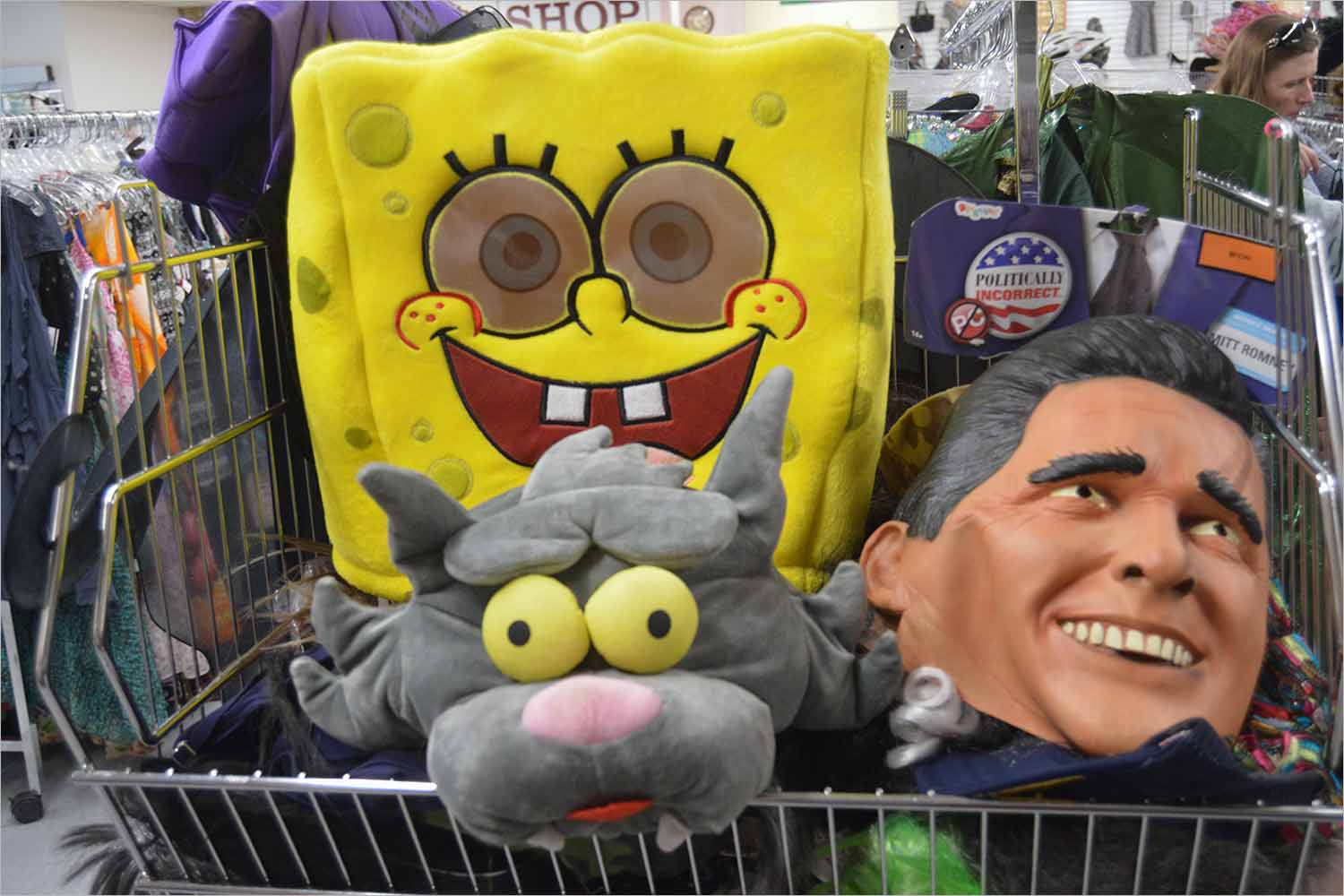 Halloween is right around the corner, so it’s time to start thinking about your costume. There’s no shortage of masks and such at St. Vinny’s, but the highlights of their collection all happened to be in the same bin. This is your opportunity to dress up as three beloved animated characters: Spongebob Squarepants, doomed Simpsons cat Scratchy, and Sen. Mitt Romney of Utah. And yes, I’m aware that last one is a real guy, but there’s no way you can convince me someone named “Mitt Romney” isn’t at least part cartoon. 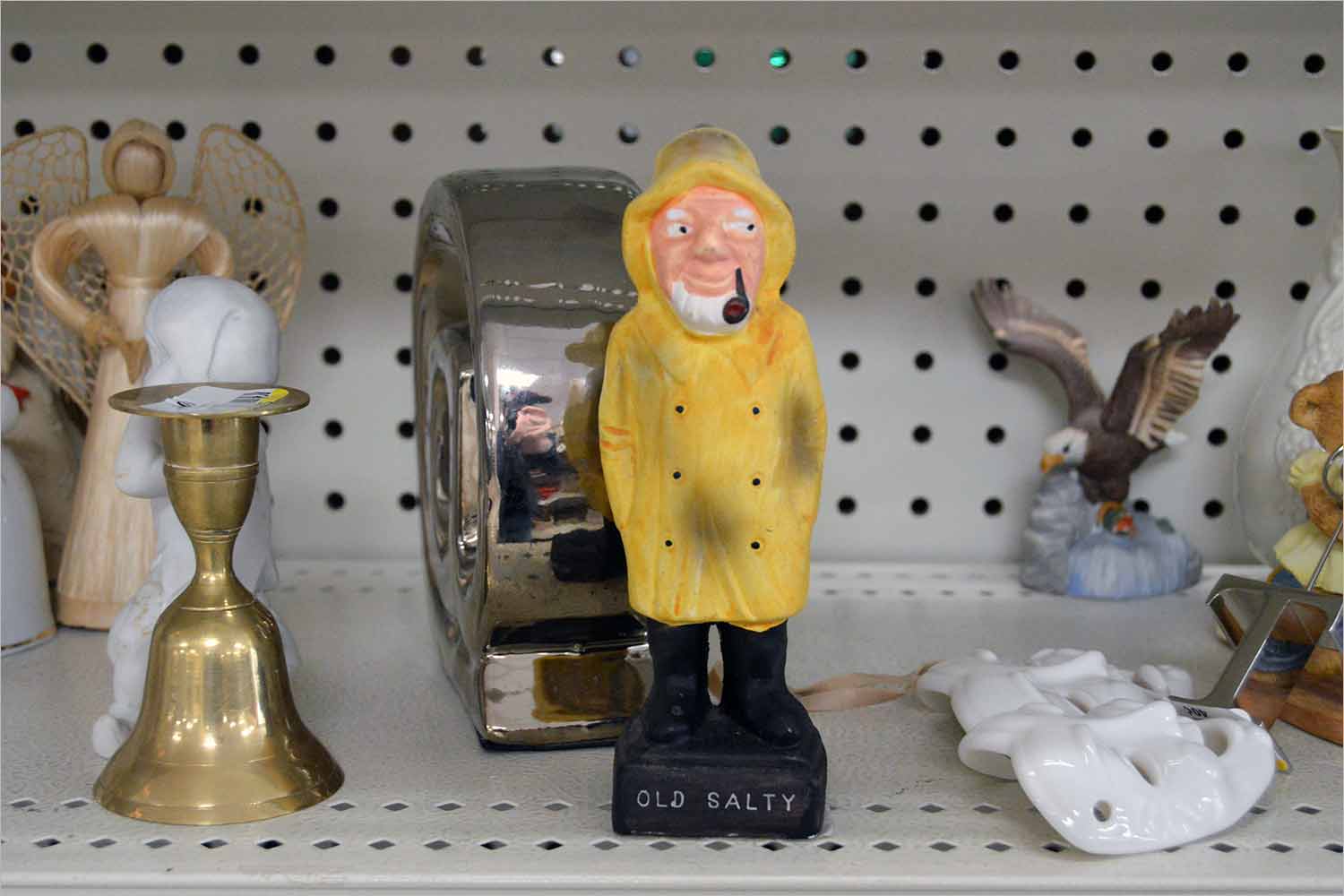 Not much is known about Old Salty except that he bears a striking resemblance to the Gorton’s fisherman (who is a total smokeshow). I had to be talked out of buying this, because apparently my partner no longer supports my interests. Please, for the love of god, someone give Old Salty a forever home. He deserves it. 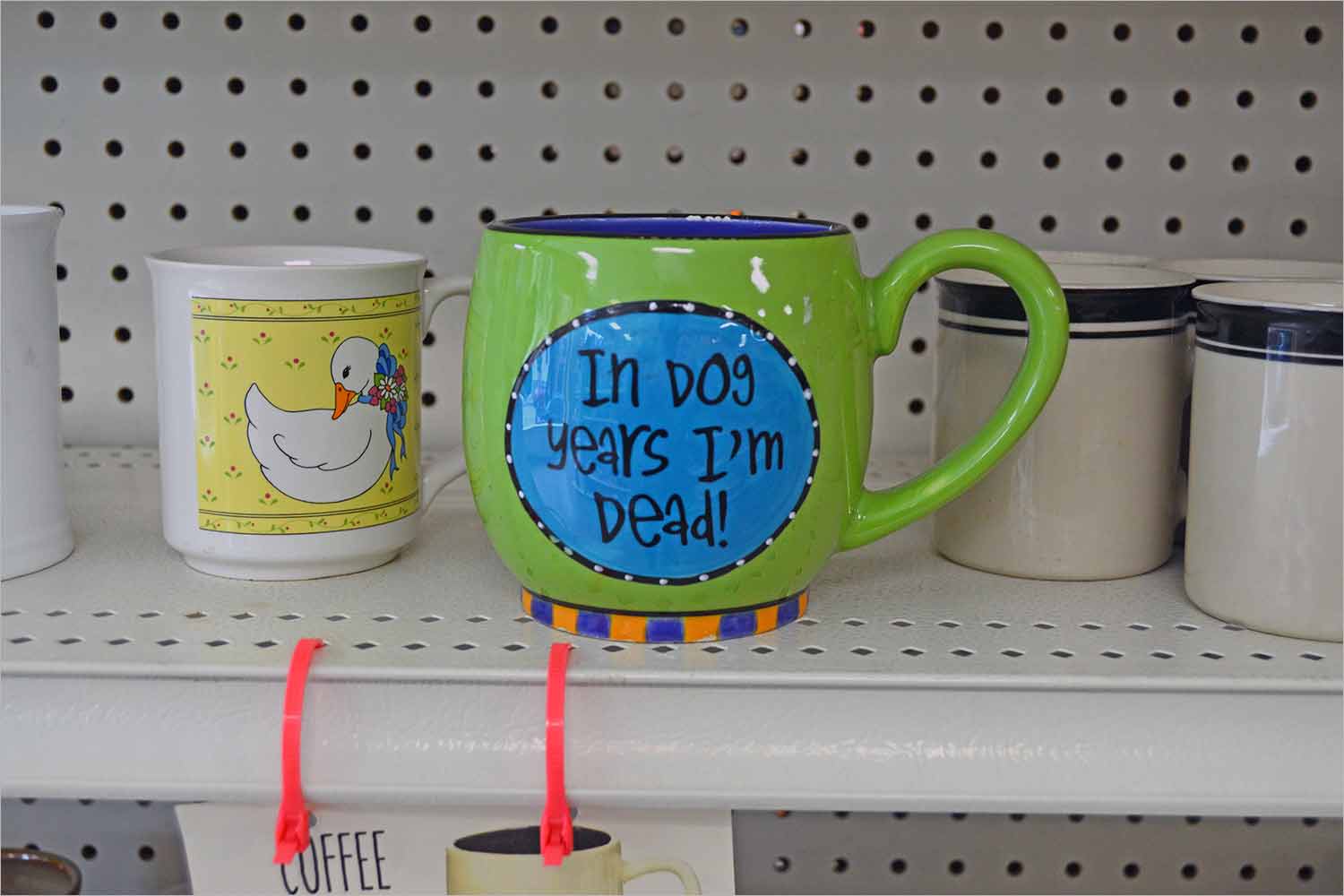 Millennials are synonymous with loving dogs and crippling depression. This ceramic coffee mug — proclaiming “In Dog Years I’m Dead!” — checks both boxes. It’s perfect for pouring a hot cuppa and checking Twitter for whatever dark shit comics like Jaboukie Young-White are making light of that day. 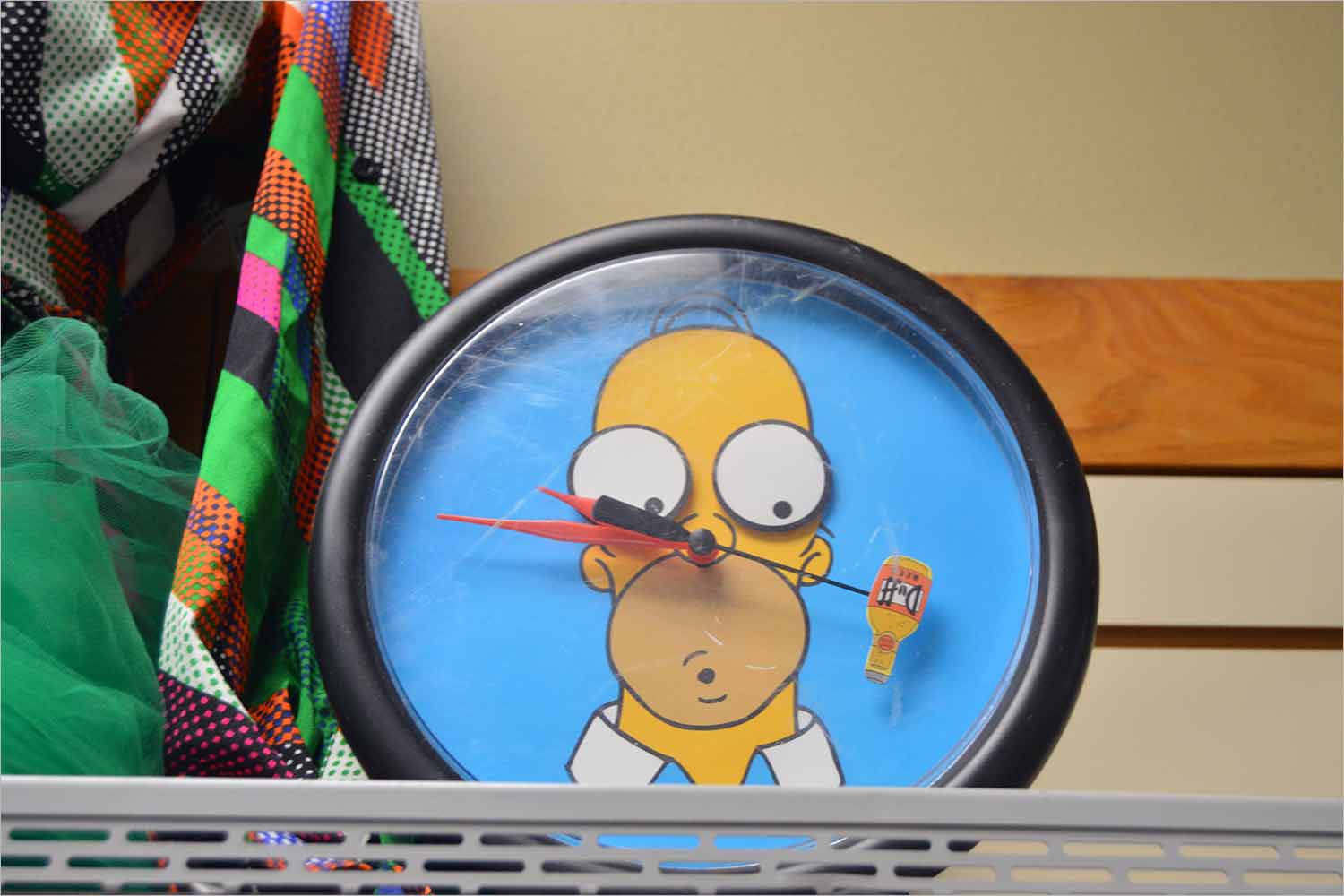 One of my personal thrifting joys is finding old Simpsons stuff. Over the years I’ve found books, DVDs and a Homer figurine that’s now at the great consignment shop in the sky. While I didn’t purchase this clock — featuring a Duff bottle for one of its hands, natch — it’s definitely one of the more interesting items I’ve come across from the show. (If you have any hot leads on Simpsons swag, please send it my way.) 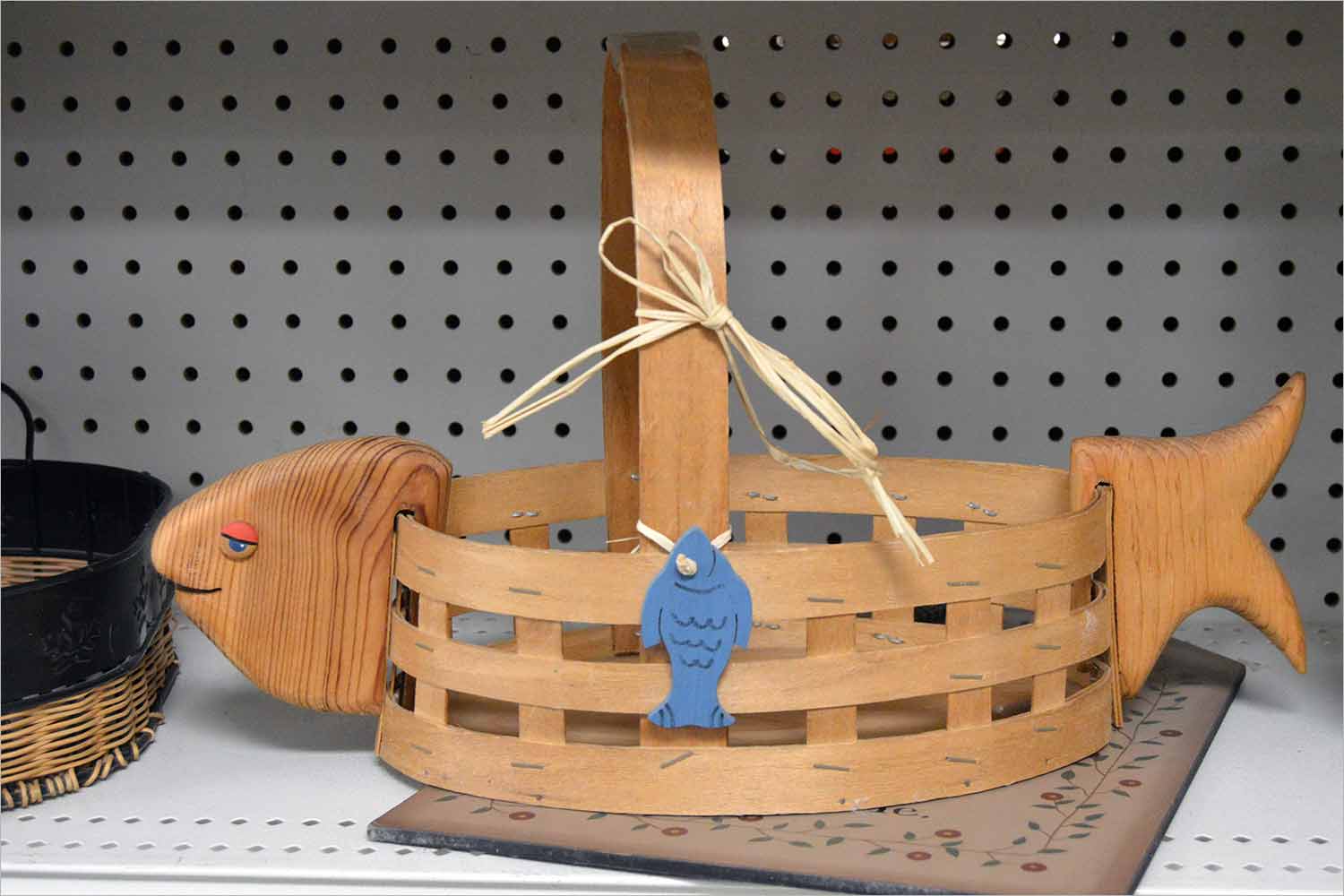 It’s a basket. Shaped like a fish. What more could you possibly want? 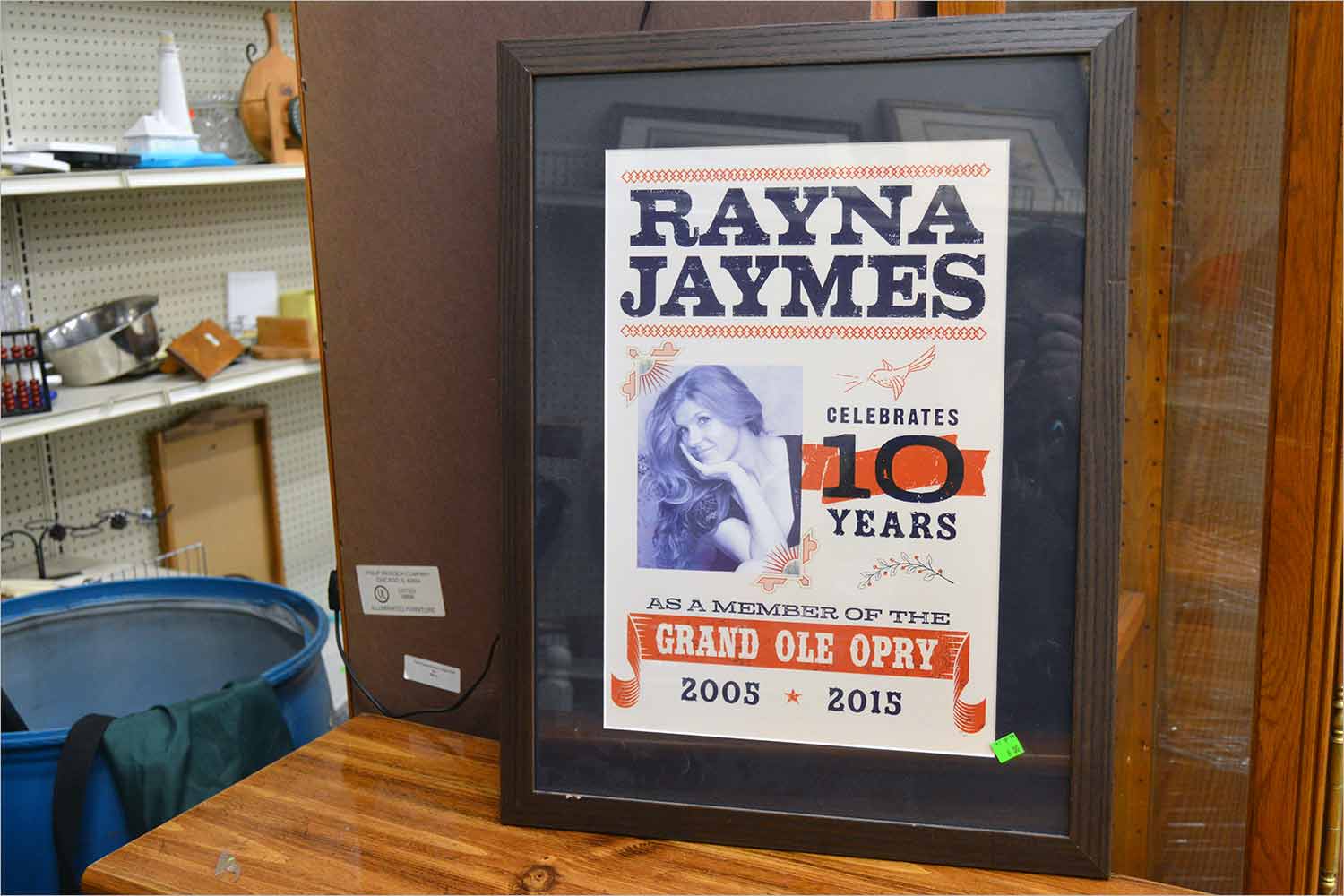 Only real country music fans will know this one. Rayna Jaymes is a multiple Grammy and CMA winner whose legendary career was revived thanks to her rivalry with the upstart Juliette Barnes. But perhaps most importantly, Jaymes is not real. She’s a fictional character who was played by actress Connie Britton on the 2010s TV drama Nashville. Regardless, it would make a great gift for that one aunt who has an asymmetrical haircut and a “live, laugh, love” poster in the living room. (At least, that’s who I imagine was watching Nashville?) And to me, Britton will always be Friday Night Lights’ Tami Taylor. Mrs. Coach is my queen. 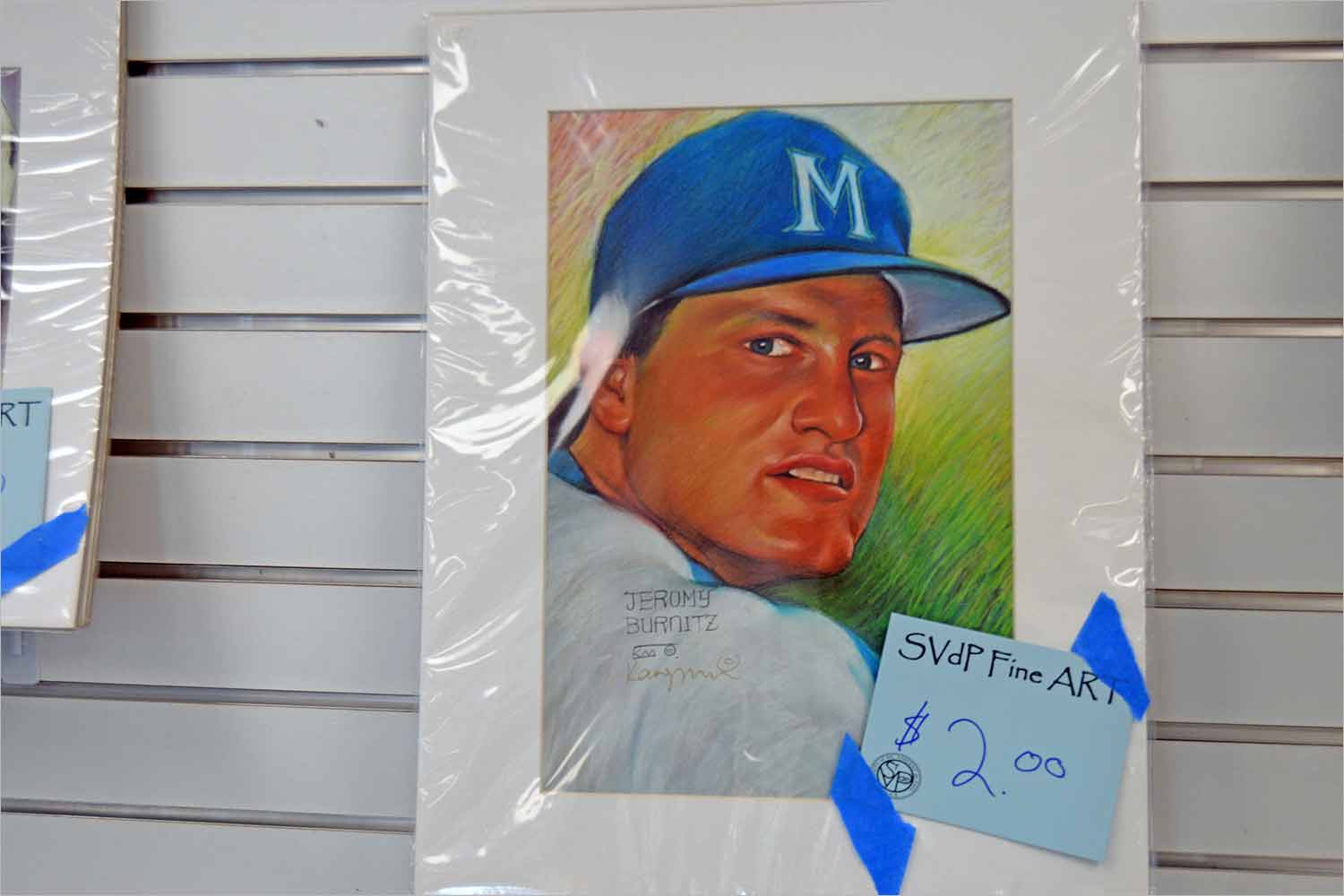 This painting was part of a series of athletes, which also included Brett Favre, Nomar Garciaparra and Dale Jarrett. But I wanted to highlight Mr. Jeromy Burnitz, who was my favorite Milwaukee Brewer growing up. It was the late ’90s/early ’00s, and the Brewers were trash. Their best player was this big lug, a career .253 hitter who made one All-Star Game. He didn’t look like a professional baseball player; Burnitz more closely resembled a department manager at Menards. He had an admirable everyman quality, and I’m glad someone chose to immortalize him this way. 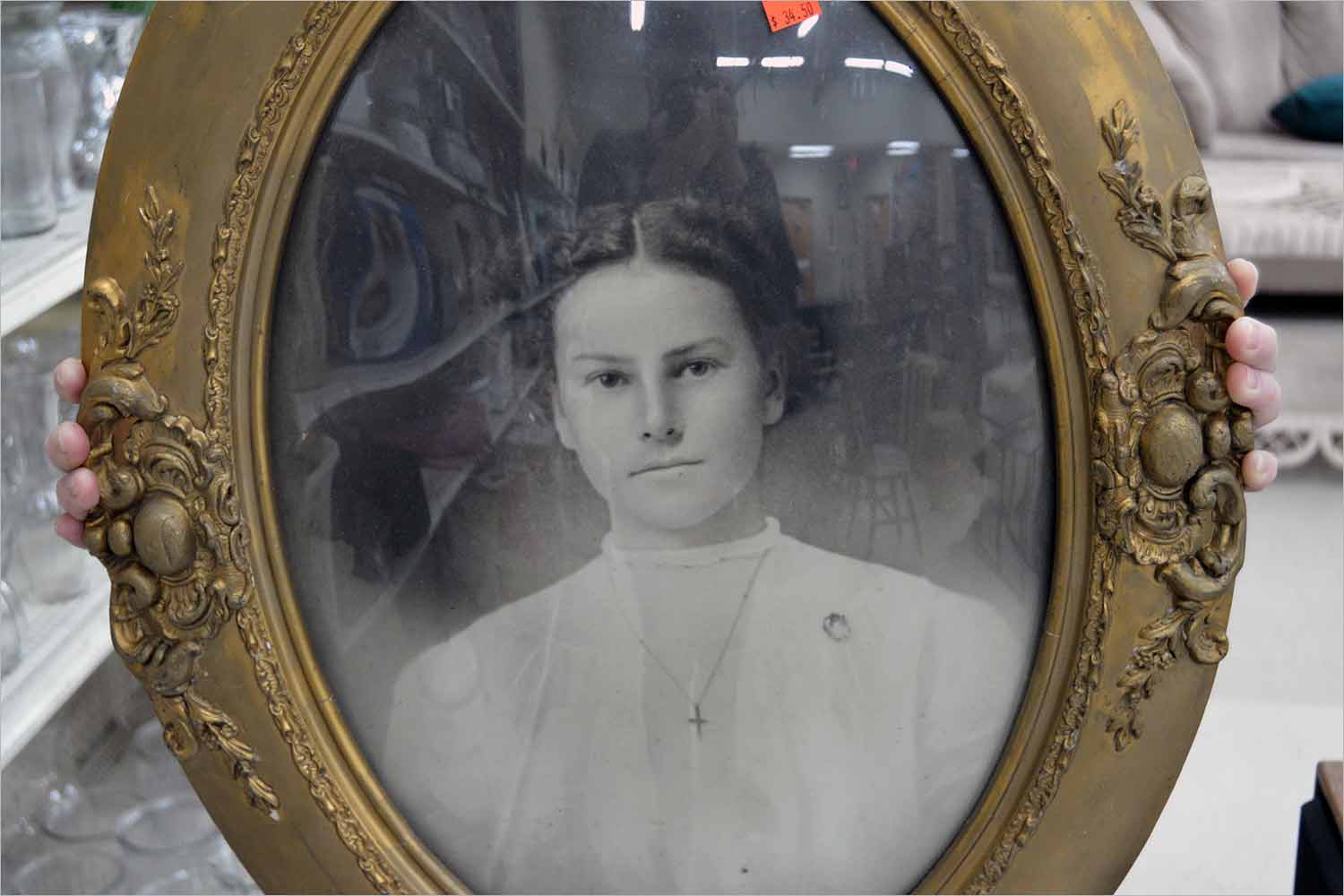 I don’t know who this is a picture of, but I’m certain that her unquiet spirit is still living inside it. Should you choose to buy it, you will never get a good night’s sleep again. Strange things will start happening around your house — doors opening and closing, flickering lights, sudden drafts. The eyes will follow you around. Eventually you’ll flee your home in the middle of the night, never to return. I’m amazed it even showed up in my picture instead of manifesting itself as ghastly orbs. 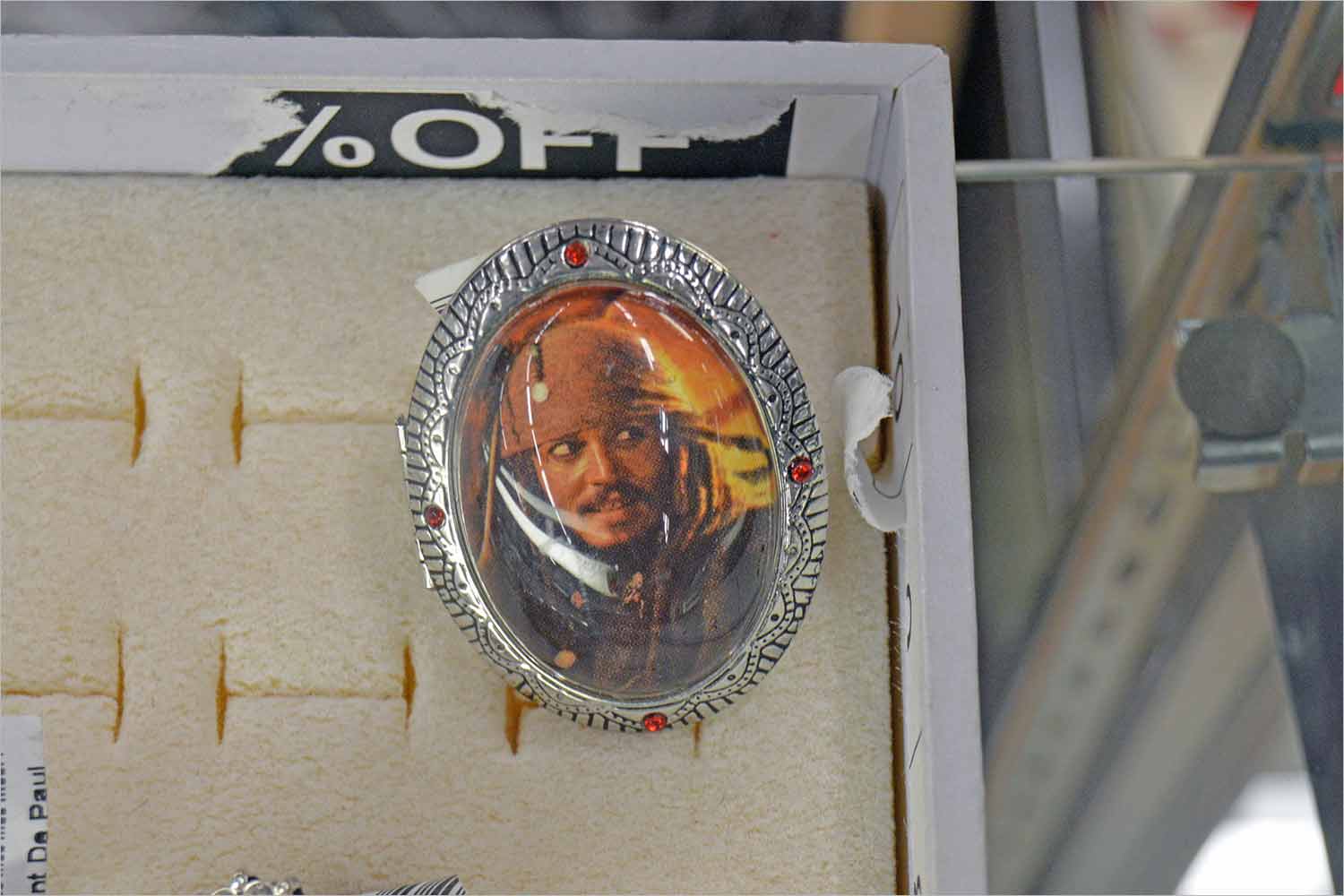 The year is 2007. Enthusiasm for Disney’s Pirates of the Caribbean series has reached a fever pitch. You’re approaching your two-week anniversary with the weird girl in your high school band who plays clarinet and shops exclusively at Hot Topic. It’s a milestone. So what do you do but hop in your time machine bound for 2019 and score this locket for a low, low price. (Just don’t tell the GF about what Johnny Depp is up to these days.) 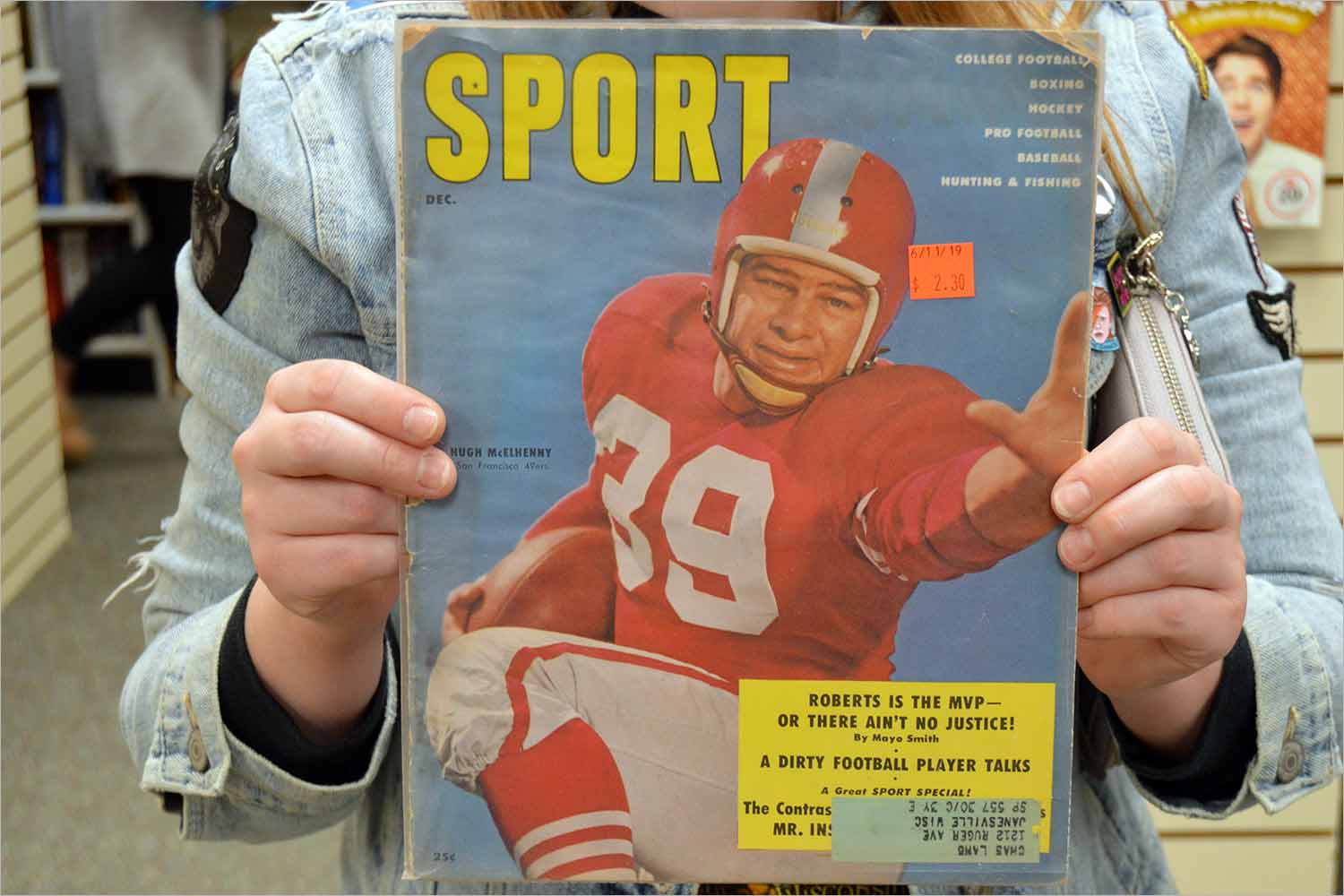 It’s Sport, covering all your favorites from December 1955: football, boxing, hockey, baseball, hunting, fishing. The cover star is a future Pro Football Hall of Famer named Hugh McElhenny, an explosive running back with the all-time great nickname of “Hurryin’ Hugh.” I never took the mag out of its plastic, but I do know that it’s a steal — this issue is currently selling for $4 on eBay and $50 on Amazon. 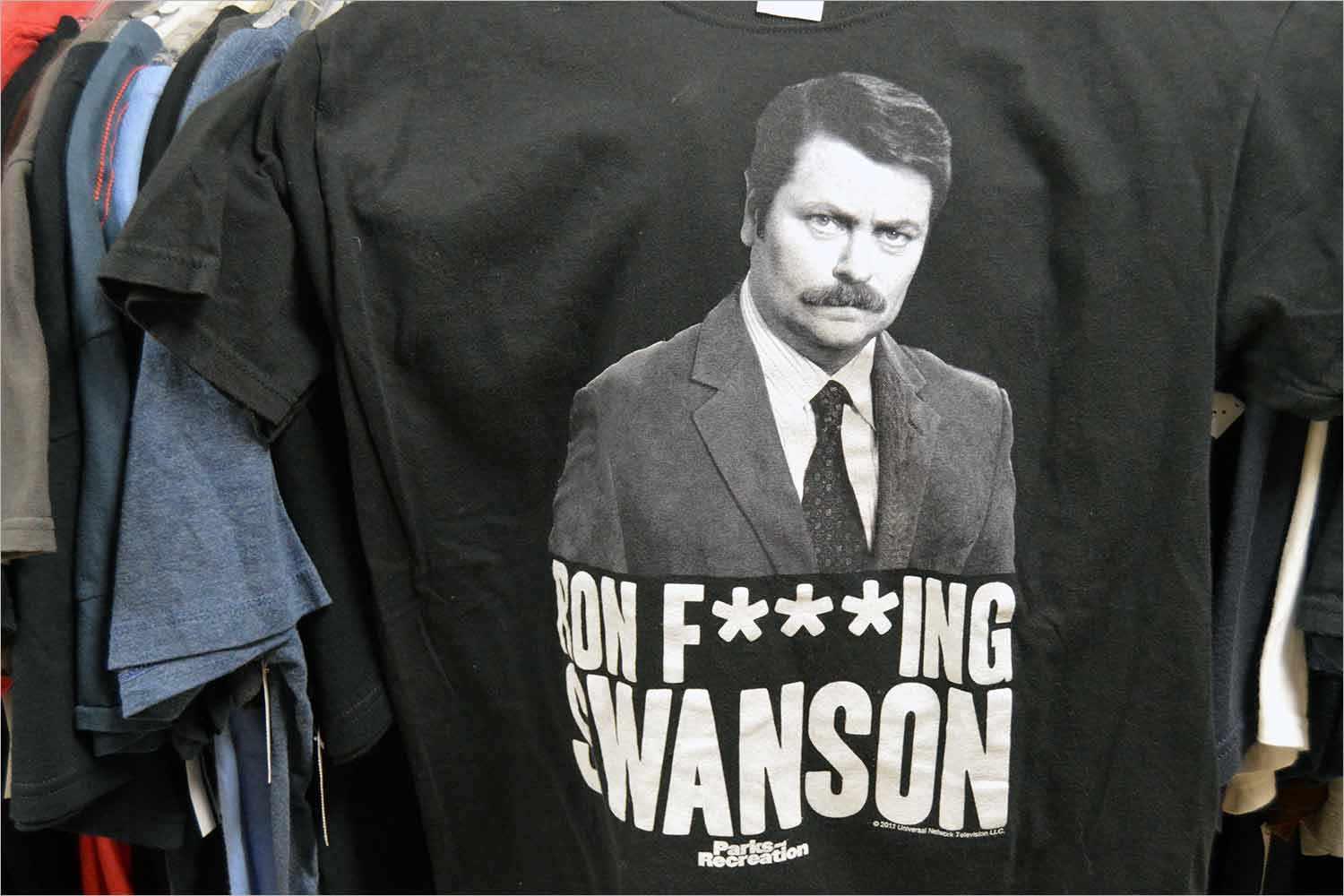 Wear it to Nick Offerman’s two shows at the Orpheum this Friday. Just don’t wear it to work, unless your boss is cool with you traipsing around covered in implied cuss words.