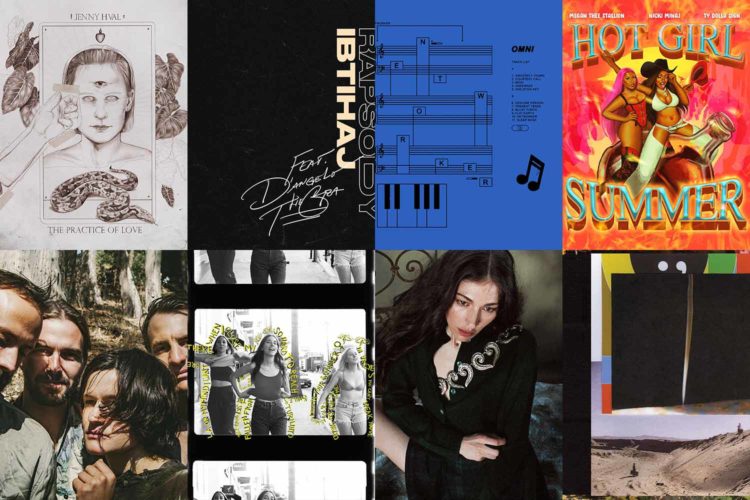 Considering all the great stuff artists around the world are releasing every day, it’s a wonder we hear about any of it at all. Even the cultural works best suited to your tastes can pass right by you if you’re not careful. For example, this week a friend texted to tell me about a band called 100 gecs whose June album 1000 gecs is an overwhelming and blissful fever dream. I call it sedimentary pop: a handful of disparate microgenres pressurized into one amazing 23-minute album.)

In counterpoint to the compressed fast-forward vibe of 1000 gecs, the following eight tracks make up a much more pleasant, measured distillation of the songs I’ve loved from this past month. The new format of this week’s column marks a new era in Pop Gazing: more songs but also more time between posts. I hope it’s easier to digest and just as fun to follow. Thank you as always for reading and sharing with a friend!

Jenny Hval’s art came together for me in a big way when I was lucky enough to catch her in Chicago twice over two days in in 2016. (Was it that long ago? Yikes!) I was already a fan, but the theatricality of those performances — costumes! choreography! — forced me to reassess Hval as an even higher-concept musician I had taken her to be. And I haven’t even read her novel! Now time has passed, and a new book is on the way as well as a new album: The Practice of Love.

“High Alice” is the second single from the album, which is out Sept. 13 on Sacred Bones. Our first sampling from Practice was the synthesizer-rich “Ashes to Ashes,” a gorgeous, danceable and meditative fantasia that brought to my mind “O Superman” and “Bay of Pigs.” An even more direct dancefloor number, “High Alice” lays wonderful, melodic vocal lines and textures over some Pretty Hate Machine drums. Both of these songs are worthy counterparts to Hval’s 2016 achievement “Conceptual Romance.” Hval is a genius and I can’t wait for this new album.

This song absolutely rules. Rapsody has spent too many years among the ranks of underrated MCs, and “Ibtihaj” may put an end to that. Despite the obvious throw-back flavor of the track, it’s tough to imagine putting together a list of the very best tracks of 2019 without including “Ibtihaj.”

The lead single from the third Omni album Networker feels both busy and sparse, kind of like the 9-to-5 lifestyle this track addresses. “At happy hours we talk and talk / are you nervous for your career? / Are you insincere?” Omni’s first release on Sub Pop, Networker is out Nov. 1.

All summer, we’ve needed Megan Thee Stallion to release a song to go along with the #HotGirlSummer hashtag she inspired. It’s finally dropped, and it’s a banger. Megan is one of the key breakout rappers of the year, and this Nicki feature is one of her stronger moments in recent memory.

Everyone’s been telling me that Big Thief’s May release U.F.O.F. is great, but I only recently got around to hearing it for myself. Of course they’re right; the album is currently in near-daily rotation for me. Imagine my delight to find out we’re getting another Big Thief album this year — how is that possible! The six-minute “Not” is our compelling first taste of Two Hands, due Oct. 11. Big Thief plays The Sylvee a week later.

Debuted in July, the Haim return single “Summer Girl” now has a music video from generational filmmaker Paul Thomas Anderson. Produced by the enviable Haim/Rostam/Rechtshaid team and armed with its flipped “Walk on the Wild Side” bass line, “Summer Girl” is an evocative tune perfectly fit for an August stroll.

More than a decade into a career that has careened off interactions with world-class artists and brands, ex-Chairlift singer Caroline Polachek is releasing her first material under her own name, and it is nutty and delightful. “Ocean of Tears” makes good on the promise of her 2017 Charli XCX feature “Tears” — cold, textural, massive pop.

We should know the drill by now: the new Bon Iver album is terrific. I came into my first i,i listen with cautious interest, but during my first spin I was repeatedly shocked at just how good it felt to hear. And after a year spent laughing off the pratfalls of Eaux Claires 2018, a track like “Naeem” makes me feel a strong desperation to buy back into the Eaux Claires promise as soon as I have the chance.