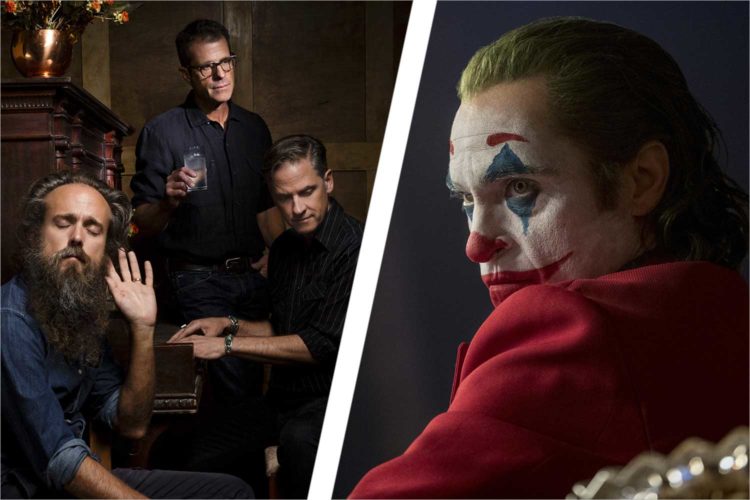 In the book Homie, genderqueer poet Danez Smith highlights the little things. Even with the world around them increasingly poisoned by hate and bigotry, Smith amplifies the bonds of love and friendship in the face of it. Homie is the third collection from the Minneapolis-based Smith, who’s also a founding member of the Dark Noise Collective, which also includes Chicago poet and musician Jamila Woods.

James Cameron’s epic true story was a bonafide cultural phenomenon. Not only did it serve as a special effects game changer — the second half of the film is intense — but Titanic also turned Leonardo DiCaprio and Kate Winslet into household names. It’s one of the most important films of the 1990s, a reminder of a time when blockbuster filmmaking didn’t have to be connected to superheroes or Stormtroopers. It’s also one of the longest, so remember to use the bathroom before the show starts.

Quit fighting this feeling, grab your best girl or guy, and head for the dancefloor, because this edition of the monthly trivia night is all about the slow ones. You Oughta Know will test your knowledge of downtempo tunes with questions all about ballads, from theatrical pop tunes to hair metal cheese. And with host Paul Guse’s penchant for singing, this should prove to be a good workout for his pipes.

It’s nearly time to decide once and for all — well, for at least a year — who is Madison’s best stand-up? This second heat of 33 comics will take the first step toward the crown. The top 25 participants from the two preliminary rounds will move on to the quarterfinals the following Wednesday, Feb. 19.

“Progressive bluegrass” may sound like a genre created in a music writer incubator, but it’s a thriving scene typified most by the indie-flecked, earthy tones of groups like The Punch Brothers and The Infamous Stringdusters. Formed in Nashville, The Stringdusters stretch bluegrass to its sonic limits, warping a traditional form of American music through a modern lens. And for a little bit of trivia, founding Stringduster Chris Eldridge now plays in the Punch Brothers. It’s just like Rust Cohle said: “progressive bluegrass is a flat circle.” With support from local jam stars Armchair Boogie.

For almost 40 years, Drivin N Cryin have been one of the South’s premier hard rock bands. The Atlanta foursome combines the boozy college rock of The Replacements with the downhome stomp of, say, Molly Hatchet. In short, it makes sense that they came from the same scene as The Black Crowes. This is especially fascinating as singer/guitarist/bandleader Kevn (yes, that’s how it’s spelled) Kinney is a Milwaukee native.

As the U.S. experiment with fascism becomes more and more commonplace, now’s as good a time as any to learn about voter suppression. 2019’s Rigged: The Voter Suppression Playbook explores how right-wing and Republican groups have worked with state legislatures to make it harder for people — particularly young ones and those of color — to vote. If the documentary’s relaxing narration sounds familiar, that’s because it’s by Westworld star and extremely chill person Jeffrey Wright.

A bit of advice: it’s best to get in on the ground floor of Black Leopard, Red Wolf. Marlon James’ fantasy epic is the first book of a planned trilogy, one that already had its film rights snapped up by actor Michael B. Jordan before it even came out. It’s not difficult to see what makes Black Leopard, Red Wolf so cinematic. It’s been called an “African Game of Thrones,” telling the story of a mercenary hired to find a lost child. James will be in attendance to break down the fantastically dense world he’s built.

‘The Office! A Musical Parody’

Quite possibly the most revered sitcom of the new millennium, The Office gets the unauthorized musical treatment. The Office! A Musical Parody reimagines iconic moments from the show as intricate music numbers, including a full performance of “The Scarn.” And don’t miss my chat with cast member Tim Powers, who plays the dual roles of Toby Flenderson and Creed Bratton.

For their third album Good Luck, Kid, Portland sister trio Joseph made a hard left turn. They moved further from their indie folk beginnings and closer to an in-your-face sound. Joseph embraced elements of racing culture and retro-futurist pop, not unlike Taylor Swift’s James Dean fantasies — but with more musical depth and not a single trace of Jack Antonoff’s ham-fisted production. Supporting on the tour is California indie rock project Deep Sea Diver.

One of the more buzzed about Madison bands in recent memory is back, as Trophy Dad returns to the stage for their first show since 2018. For a refresher on the group’s buzzy power pop, revisit their 2017 EP Dogman. They’ll be performing here alongside Barely Civil, the Wausau emo crew that seemed to pop up (to me at least) on every genre-adjacent show lineup in the past year. Also performing is Madison punk project Tom Danks, who will release a cassette called George Gloomy. I’m here for the celebrity puns.

In the 1980s, legendary parodist “Weird Al” Yankovic made a truly bizarre movie that flopped upon release. But as is the case with all the great-bad-movies, it wasn’t actually bad at all. 1989’s UHF was simply ahead of its time, practicing the anarchic, ADHD-addled surrealness that would later find a wide audience through chaotic performers like Tim Heidecker and Eric Wareheim or Tim Robinson. Yankovic stars as George Newman, a 30ish dweeb who inherits a failing local cable access station. That means it’s up to George to save the station from inevitable closure.

Comedian Barry Rothbart is a bastion of down-to-earth weirdness. The 36-year-old’s material is defined by his wryly absurdist worldview, which Rothbart delivers through a clear-eyed lens. Though it’s fitting for someone with such a wild background — his did was basically Howard Ratner from Uncut Gems. Rothbart can also be seen in a recurring role on the acclaimed Showtime comedy Kidding, starring Jim Carrey as a children’s TV host.

Friday through Sunday, Feb. 14-16, The Marquee at Union South (info)

Todd Phillips’ Joker was one of 2019’s more controversial films. It is a raw, gritty take on Batman’s arch nemesis that also doubled as a heartbreaking look at mental illness — but it’s also a half-baked political commentary that at times seemed unsure of what it stood for. Regardless, Joaquin Phoenix’s performance as the Clown Prince of Crime was riveting, with the actor earning his first Oscar for the portrayal. Joker is not a perfect movie, but even its flaws make for a compelling watch. (And congrats to composer Hildur Guðnadóttir, who became just the fourth woman in history to win the Academy Award for Best Original Score for her work on Joker.)

Friday through Sunday, Feb. 14-16, The Marquee at Union South (info)

Jennifer Kent is a mental terrorist with a mission to ruin your sleep patterns. That’s what she did on 2014’s The Babadook, a movie that became an instant entry in the pantheon of great horror flicks. Now, the Australian director is back on her bullshit. 2019’s The Nightingale isn’t actually a scary film by design, but instead a brutal drama about a young woman on a revenge mission in Australia’s penal colony era. It’s hardcore enough to come with a trigger warning for both physical and sexual violence, likely making The Babadook look like a walk through the park.

In 2005, indie luminaries Calexico and Iron & Wine made an EP together called In the Reins, and it was unsurprisingly great. 14 years went by without a proper follow-up, but then last summer came Years to Burn, their first full-length collaboration. It’s a perfect cocktail of Sam Beam’s gentle vocals and Calexico’s dusty desert rhythms. You may even find yourself wistful for the Bush era! Anyone got a DVD copy of Walk the Line I could borrow? Joining these two giants is SoCal singer/songwriter Madison Cunningham.

Yeah, baby! The motherfuckin’ Weasel’s in the house! Ow-ow-OWWWW! (*shotguns can of Cheez Whiz*) With that out of my system, I can tell you that actor/comedian/bonafide ’90s icon Pauly Shore is performing a sold out show in, of all places, Cottage Grove. You’ve seen him in films like Bio-Dome and Encino Man, but Shore’s comedic roots are on the stand-up stage. In fact, his mother Mitzi Shore founded vaunted L.A. venue The Comedy Store. The 52-year-old’s improv-heavy routine is forever gleeful, with Pauly approaching each audience like a surfer approaches a wave. Those are his words btw. Weasel forever.

Despite their heavy surf-pop influence, there aren’t many swells or breaks in Beach Bunny’s hometown. But nonetheless, the Chicago four-piece has combined the aesthetic with a dreamy form of bedroom pop. It’s the kind of music you’d expect to play as you daydream about a crush. The group’s debut album Honeymoon will be out on Friday. Also performing this sold out show are another pair of Windy City bands: posi-punks Lettering and gloom-mongers Dearly Somber.

‘Indiana Jones and The Last Crusade’

Indiana Jones versus Nazis. What more could you want? In the franchise’s third film, Harrison Ford’s swashbuckling professor aids his father — a Holy Grail scholar played by Sean Connery — who’s been kidnapped by those Germanic fascists. It’s the proper conclusion of the Indiana Jones saga. (In this house, we mentally retcon the Shia LaBeouf-starring head scratcher The Kingdom of the Crystal Skull.) Also: Monday, Feb. 17 and Wednesday, Feb. 19.