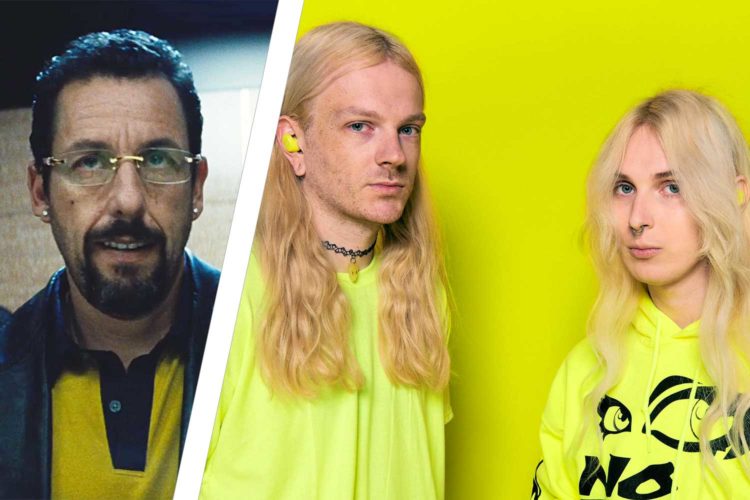 For some people, the most life-altering thing they do in their 50s is buy a motorcycle. Author P. Carl, however, did something a bit different. He started living as his true self, transitioning genders after living a half-century as a woman. In his new book, Becoming a Man, the author discusses his transition in frank and often funny terms, examining the impacts it’s had on his life and relationships.

It’s impossible to calculate the effect Bob Marley had not just on reggae but on popular music in general. So to celebrate the late legend’s 75th birthday, Madison favorites Natty Nation are paying tribute to him. This is the 12th year the group has honored Marley for his special day, and by now they’re just as good at playing his songs as they are at playing their own. Get up, stand up and go.

The only thing better than a good bad movie is making fun of it in real-time, and that’s what High Noon’s Cinerruption seeks to do. For the potential series’ maiden voyage, comedians K.C. Phillips, Rory Rusch and Kayla Ruth will take a ride on Con Air. For my money, the 1997 flick is one of the “most Nicolas Cage” movies ever made, starring the actor as a convict on a flight with an all-star cast of murderers and rogues. It’s absolutely absurd and a pinnacle of “good bad” cinema. So join these three comics as they take the piss out of one of the best films to watch at 3 in the afternoon on TNT.

It’ll be a big week for Kayla Ruth, whose Con Air roast above will serve as practice for her showing here the next night. She will go up against 11 other comics on someone’s way to the title of funniest in town. The top five will compete in the final on March 4.

Hailing from Sydney, Australia, Rüfüs du Sol are one of today’s preeminent dance music acts. Yes, they succeed in tearing up a dancefloor, but they do so with a little more lyrical depth than their contemporaries. They want the listener not just to feel good, but to have words to assign to that feeling as well. The trio released a full-album remix of 2018’s Solace in September. With fellow Aussie dance group Crooked Colours.

Motel Breakfast is like speakeasy Americana. It’s steeped in earthy aesthetics but sprinkled with elements of soul and jazz. They’re as hard to pin down musically as they are geographically; the quartet’s members hail from Madison, Milwaukee and Chicago. It’s not just a Venn diagram of the Midwest, but of American music in general. Support comes from Milwaukee alt-roots project Sleepy Gaucho and Minneapolis singer/songwriter Jake Labine.

This Norwegian comic is in the middle of an international breakthrough, and he couldn’t be doing it more awkwardly. Daniel Simonsen uses his natural shyness and heavy accent to keep audiences on their toes, unsure whether to laugh or cringe. But more often than not, they end up laughing. Since 2018, Simonsen has appeared on both The Late Show with Stephen Colbert and Late Night with Seth Meyers.

Steve McQueen is a Hollywood icon whose effortless coolness was immortalized by a great Drive-By Truckers song. But he was also a great actor, and one of the first big-screen action stars. Before Bullitt or The Thomas Crown Affair, there was 1963’s The Great Escape. Directed by John Sturges and arguably McQueen’s best film, The Great Escape is a prison break drama that also features some of the actor’s best stunts. (Did someone say “motorcycle jump”?) In addition, the WWII-set film boasts an ensemble cast that includes James Garner, Richard Attenborough, James Coburn and Charles Bronson.

I’ve written before about my appreciation for songwriting master John Prine, so I’m thrilled to see some of Madison’s best folk and Americana musicians coming together to pay tribute to him. Members of Lost Lakes, WheelHouse, The Mascot Theory and others will dive into the 73-year-old’s decades-long catalog. Good luck to whoever has to play “Angel from Montgomery.” Those are big shoes to fill.

Experimental duo 100 gecs is a throwback to an era of music that seems to have barely passed. Combining the abrasive electronics of early-2010s emo with the punky dance-pop of Charli XCX (who’s an avowed fan), 100 gecs represent pop getting extremely online. It’s like a sonic meme, a patchwork of different well-loved trends into something excitingly new. Their acclaimed debut 1000 gecs was released in 2019. Tony Velour, an alt-rapper and collaborator of 100 gecs’ Dylan Brady, is the opener.

As a bonafide stan with a deep love of films like Hunt for the Wilderpeople and What We Do in the Shadows, I was pleased to see Taika Waititi take home the Oscar for Best Adapted Screenplay for this 2019 film. And though I have yet to see the anti-hate satire, Jojo Rabbit appears to be another whimsically dark entry in the writer/director’s filmography. In it, Waititi — a Jewish Maori person — plays Adolf Hitler as the imaginary friend of a young boy. There’s more to it, obviously, but that’s one hell of a hook.

Adam Sandler isn’t just a good actor; he’s a really good actor! I’ve been saying this for years — Punch-Drunk Love, people! — but it seems Uncut Gems was the one that broke the dam. In the Safdie Brothers’ stylish and hyper-tense 2019 thriller, the SNL vet plays diamond dealer Howard Ratner, a weirdly charming goober of a man with a serious gambling addiction. Howard soon finds himself embroiled in a series of increasingly intricate bets he can’t afford, caught between a vindictive family member and, yes, NBA legend Kevin Garnett. This movie will take years off your life in the best way possible. This is how you win.

Fitz and The Tantrums

It’s amazing Fitz and The Tantrums aren’t bigger than they are, because they’ve mastered the style of crowd-pleasing soul-pop that can move both the radio charts and the music snobs. You can attribute this to their slick production or knack for earworm hooks, but the simple fact is that Fitz and The Tantrums are just a solid band. It’s a seamless blend of pop bombast and Motown elegance that’s bound to get stuck in your head until summer. With L.A. indie pop trio Twin XL.

Madison metal band Tubal Cain has a new album called Summon the Mist that’s sure to rip, and they’ll be joined at this release show by Ossuary, Lost Tribes of the Moon and DJ Heavy Eye. But this night is also notable for another, less awesome reason: it’s the last show at Art In. So send the beloved indie space off properly by watching a bunch of heavy bands tear the roof off it. (Not literally, though; that’s no way to recoup a security deposit.)

Can’t wait until late May for this year’s Summer Camp Music Festival? Get a jump on the action with these local bands competing for a spot in the lineup. Pine Travelers, Spare Change Trio, Soul Symmetry and Undercover Organism will each perform, with the winner heading down to Chillicothe, Illinois to perform at Summer Camp. Long-running Appleton jamtronica band Ifdakar, veterans of the fest themselves, will host.

‘Back to the Future’

There are very few films that are front-to-back perfect. Back to the Future is one of them. Both crowd-pleasing and artistically engaging, director and co-writer Robert Zemeckis’ 1985 classic was a watershed moment for movies. Starring Michael J. Fox as totally ’80s teen Marty McFly and Christopher Lloyd as the eccentric Doc Emmett Brown, Back to the Future examines the pros and cons of time travel through a comedic lens. Pro? You could invent rock ‘n’ roll. Con? Your teenage mother might hit on you. Also big ups to future dad rock icons Huey Lewis and the News for delivering the greatest movie theme song ever, “The Power of Love.”

One of the worst parts about being a grown up is the lack of giant inflatable activities. This event serves to remedy that, offering stuff like giant hamster balls to roll around in and a big blow-up boxing ring to sock ’em bop your friends. And that’s just the tip of the iceberg when it comes to the things you can do at Bounce. There will also be a cash bar and music, but let’s be real: I probably sold you at “giant hamster ball,” huh?

Hey, remember Cinerruption from earlier this week? It likely wouldn’t exist without Mystery Science Theater 3000. The television series’ original host, Joel Hodgson, wasn’t the first person to provide a humorous running commentary on bad movies, but he does it better than anyone. (With the help of his trusty robots Tom Servo, Crow, and Gypsy, of course.) Here, the MST3K crew will bring an “exhilarating roller coaster ride through some of the cheesiest films ever made.” Is there room for one more on the “Satellite of Love,” Joel?

Shot in NYC in the early 1980s, this film directed by Edo Bertoglio is a time capsule of post-punk bohemianism. Written by future GQ “Style Guy” Glenn O’Brien and starring late artist Jean-Michel Basquiat, Downtown 81 meanders its way through the hipster subculture of the time as Basquiat interacts with luminaires like Blondie’s Debbie Harry and original Yo! MTV Raps host Fab 5 Freddy. The film was abandoned shortly after being completed but got a proper release in 2000 after O’Brien re-acquired the rights to it.