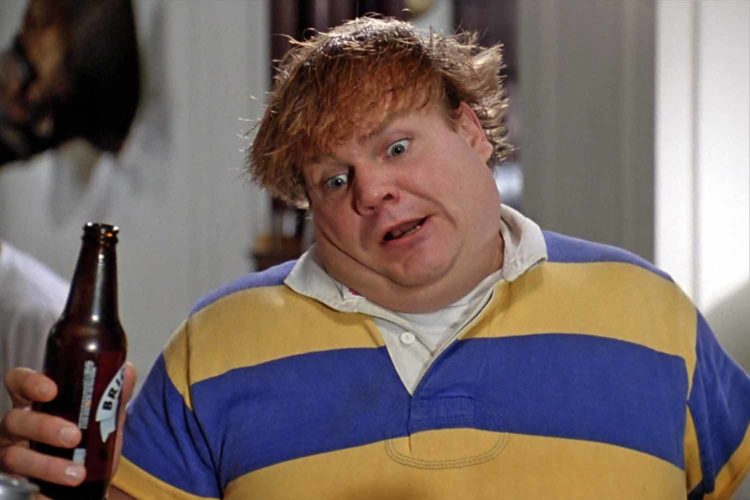 If you read this site often, you may know how I feel about Chris Farley.

My love for the man is deep and abiding. To me, the Madison native was a sort of folk hero for goofball Wisconsinites. The Saturday Night Live star’s breakout film, Tommy Boy, is celebrating its 25th anniversary this spring. While that makes me feel very old — even though I was only 4 when the road trip comedy came out — it presents a perfect opportunity to talk about the late “Farls.”

And the folks at The Ringer have done just that, publishing not one but three Farley-related pieces this week. (Last year, the site also ran a wonderful retrospective on Farley and his pal Adam Sandler.) Each is highly interesting and definitely worth a read — but if you’re short in time, let me give you the SparkNotes first:

His filmography is brief and not everything he was in was great, but at the very least Farley’s presence elevated the material. The Ringer article linked above breaks his career into pieces, focusing not just on his performances but also his influences and other media about him. (Including, ironically, Roger Ebert’s absolutely vicious review of Tommy Boy.)

From his idolization of John Belushi, who also died at 33 of a drug overdose, to his iconic supporting role as an unhinged school bus driver in Billy Madison, writers Andrew Gruttadaro and Justin Sayles wax poetic on what made Chris Farley… well, Chris Farley.

On a personal note, I was happy to see the inclusion of The Chris Farley Show, a 2008 oral history that was a very formative book for me. Had I not read it, I probably wouldn’t have become so interested in sketch comedy. And I never would have considered pursuing writing professionally. I could be a lawyer right now. Thanks, Chris Farley!

“So Elegant, So Sensual”

Speaking of The Chris Farley Show, some of its most interesting details relate to the dog-with-a-bone commitment Farley had to his craft. He would take ballet lessons to increase his agility, part of why he’s among the most gifted physical comedians of the past 50 years. But Farley was also a deeply sensitive and emotional man with a people-pleasing problem, as illustrated by Nate Rogers’ affecting article for The Ringer.

Some of his SNL coworkers — like Chris Rock and Bob Odenkirk — will point to the “Chippendales” sketch Farley did with Patrick Swayze as the beginning of the end. Despite its enduring popularity, the 1990 sketch put a spotlight on Farley’s weight, which he had been teased about since childhood. But he wanted to make people happy, and people were happy when they were laughing at the fat guy.

“There’s no comic twist to it,” says Rock in The Chris Farley Show. “It’s just fucking mean.” Even so, the sketch is critical to understanding Farley’s pathos, because it probably had more influence on what he would become than anything else.

The funniest person to ever break a table was so much more than that. @Nate_Rgrs on Chris Farley’s legacy: https://t.co/4Cr4iXwtvX

I could probably quote Farley’s SNL best-of collection verbatim. But despite all my years of Farley stanning, there’s still so much I haven’t seen. One of those rarities is a cut-for-time Weekend Update bit in which Farley begins telling a story about an encounter with someone and then repeats himself over and over, never getting anywhere in particular.

According to former SNL-er Norm Macdonald, it was based on a running joke Farley would pull backstage. And no matter how long the big guy dragged it out, it only seemed to get funnier.

“When you can reduce something to four words and be funny for 25 minutes without an actual joke or punch line, that’s genius,” Macdonald says in The Chris Farley Show. “It’s not even really comedy anymore. It’s almost like music, like jazz variations.”

The Ringer rightly points to it as proof that Farley was much more than a master of pratfalls. (Though he was that, too.) He trained in Chicago at the hallowed halls of The Second City, where he learned to mix an impressive physicality with inventive sketch concepts. It turns out he could do surreal alt-comedy with the best of them.

This makes you wonder if, in some alternate timeline, a middle-aged Farley would be telling Tim Robinson to make a car with a great steering wheel that won’t whiff out the window while you’re driving.

It’s Chris Farley Day at The Ringer, which is why @AlanSiegelDC is looking back on a long-lost ‘SNL’ sketch that showcases the late comic’s genius https://t.co/aKb6FJec30

For more, read the Ringer pieces by Andrew Gruttadaro and Justin Sayles, Nate Rogers, and Alan Siegel, plus last year’s also by Siegel.