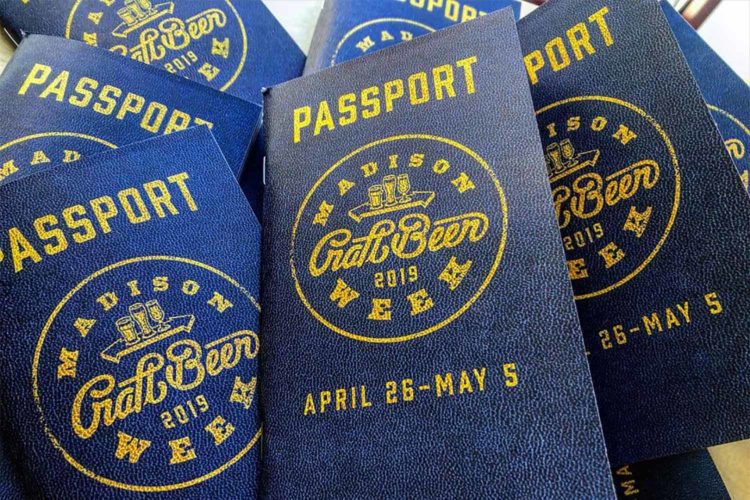 Hometown Sweethearts were always more than a cover band. The Madison rock trio dabbled in originals as well, including a song called “Blackout” that recently appeared in the Mark Wahlberg comedy Instant Family. And for the first time in nearly two years, Hometown Sweethearts’ original three members will perform together. (Interestingly not at Crystal Corner, where they performed every Tuesday night for five years.)

Turn back the clock to 2005 because She Wants Revenge is coming to town. The MySpace-era post-punks dissolved in 2012, but reunited in 2015 after American Horror Story: Hotel introduced a whole new audience to their goth-rock classic “Tear You Apart.” The duo of Justin Warfield and Adam Bravin are now working out their first new material since the 2011 release of the LP Valleyheart. Opening are a pair of Madison acts: psychonauts Vanishing Kids and power-noise czars Caustic.

When writers try to depict Wisconsin, there’s generally a great deal of it lost in translation. That’s not the case with Nickolas Butler, an Eau Claire-raised author with a bibliography full of acclaimed novels and short-stories. Many are set in small-town Wisconsin, including Little Faith, Butler’s new book. It’s about a family coping with their patriarch getting in too deep with an extremist church, and here Butler will read from it.

Since its founding, the Montreal-based Just for Laughs Festival has been a proving ground for comedy’s brightest stars. Some of the funniest voices in Madison will perform here as part of a two-night showcase. The lineups includes four former Madison’s Funniest Comic winners: Rory Rusch, Johnny Walsh, Charlie Kojis, and David Fisher.

You know who Chelsea Handler is. Bestselling author, longtime TV staple and all-around funny person, Handler is one of the biggest draws in comedy. After all, she was one of the first women to use the same frank, often downright gross terminology that male comics do to describe her sex life. And she does it with an almost surgical precision. Without Chelsea Handler, there would be no Amy Schumer or Whitney Cummings. She’s a true trailblazer, as well as a titan of the art.

These DC post-punks make danceable music with a message. Their latest album, The Seduction of Kansas isn’t just a banger. It’s a banger that’s also a scathing critique of capitalism and modern American politics. (And it’s also one of the year’s best albums, according to all my friends who are authorities on that sort of thing.) Support comes from German garage-pop duo Gurr.

This New York-based electro act specializes in laser-lit jams sure to get even the most rhythmless out on the dancefloor. But what’s interesting about Jai Wolf — whose government name is Sajeeb Saha — is the amount of influence he takes from indie rock. From post-rock walls of sound to the buoyant art pop of bands like Phoenix, Jai Wolf’s musical palate is far more diverse than a lot of his more bombastic contemporaries.

If you’re looking for the most aggressively out-there show of the week, look no further. Science Man is a Buffalo, New York-based solo project of John Toohill (who also fronts punk bands Radiation Risks and Alpha Hopper) and caters in an industrial blend of punk rock. Joining the Science Man is the “Maintenance Man” himself, Alex Wiley Coyote, plus the swampy one-man jams of Roboman, who you might also recognize from his other gig slinging drinks at Mickey’s.

Without Gram Parsons, country rock as we know it would likely not exist. (We also wouldn’t be blessed with this Johnny Knoxville/Michael Shannon comedy, which may or may not be a good thing.) Local shitkickers The Dirty Shirts will pay tribute here to the legendary singer and songwriter by performing in full two of his most beloved albums, GP and Grievous Angel. Bear witness to the return of the grievous angel (sort of).

Hippo Campus has been one of the more successful acts to emerge from the Twin Cities in recent years, and rightfully so. The St. Paul-based group formed at a high school for the arts, which is unsurprising given the easy mastery they all seem to have of their respective instruments. The result is an airtight, fluid brand of indie pop that seems to hang in the air before heading straight for your ears. Upstart pop star Samia will open.

I’ll be frank, my knowledge of Shane Torres is pretty limited. But he’s one of the only comedians whose jokes I think about every day. Namely his bit questioning why, exactly, do we hate Guy Fieri so much? What did Guy ever do to us? He’s a good guy, but he’s also a human cheese fry. This dilemma torments my soul. I should go to the show and suss it out with Mr. Torres.

The connection may not be direct, by you’ve got Jay Farrar to thank in part for A Star is Born. Without Farrar’s influential output with Uncle Tupelo and his rootsier recordings with Son Volt, Bradley Cooper’s country rock star Jackson Maine likely would have been a yarbling grunge washout. Farrar helped spearhead an Americana movement that’s still growing. And with his gruff, Midwestern twang and picaresque lyrics, Farrar and Son Volt are still at its forefront. Their latest, Union, was released in March.

It’s the most wonderful week(-plus) of the year! Bars and restaurants all over the city will celebrate the area’s craft beer scene, highlighting the brews and also the cuisine and culture that goes with it. Get out there and raise a glass to your local brewmasters.

After what seems like an eternity of buildup, Madison’s first professional soccer team will make its home debut. The Flamingos picked up their franchise-first win on April 19, with a 2-1 victory over Orlando City B. Now they’re looking to equalize their 1-2 record against Greenville Triumph SC. Put on your pinkest shirt and get ready to go full ’mingo. (And if you’re not busy before the match, stop by the High Noon Saloon for a tailgate hosted by the Flamingos’ official supporter section, The Flock.)

I am very confident in saying that “Cribshitter” is the best band name in this city. But they’re much more than a funny name: Cribshitter makes art-pop with an emphasis on “art.” Each of their songs is a multi-layered collage of sounds, from funk and world music to alternative rock. With a couple of the area’s finest ’90s kids, Labrador and Heavy Looks.

When I saw Gender Confetti in January at the Wisconsin Punk Fest, the local duo blasted the roof off the Majestic — and they were the first band! Sylvia Johnson and Elyse Clouthier make music that exists at the crossroads of many of punk’s subcategories, and they absolutely kill live.

Miyha are sort of like Voltron. The Madison quartet is made up of pieces of some of the area’s best bands, including We Should Have Been DJs, Tarpaulin and Parsing. (They are not, however, giant robots.) They’re celebrating the release of World’s Biggest Crush, an album that recalls Hop Along in its confessional indie punk. It’s out Friday but is streaming here now. Joining for this show are According to What and CNL, the solo project of Proud Parents’ Claire Nelson-Lifson.

Pokey LaFarge is the only guy on Earth who can pull off dressing like a Coen Brothers character every day. But the rest of us normies aren’t anywhere near as musically talented as Pokey. His throwback country swing has won him fans all over the world and scored his band a cameo in the 2013 film The Lone Ranger. Hopefully you already got your tickets for this one, because it’s sold out.

Given that they’re a cover band, there are certain songs these Iowans are pretty much required by law to play (“Mr. Brightside”). But Pork Tornadoes’ setlists include some atypical pieces, from Cold War Kids to Amos Lee to a cover of a bluegrass cover of “Gin and Juice.” As in the Snoop Dogg(gy Dogg) song. It’s like cover band Inception.

Dan Savage was working at Four Star Video Heaven in Madison when he started Savage Love in 1991. Nearly 30 years later, he’s one of the most high-profile sex columnists in history. That means he gets to do cool stuff like host the HUMP! Film Festival, a sex-positive showcase of DIY pornography from all around the world. And it all gets destroyed after the festival, so this is truly your only chance to see it.

I feel like we don’t need to talk you into drinking bloody marys, but if you were on the fence, maybe you should know it’s for a good cause? Madison’s Best Bloody supports the Great Lakes Hemophilia Foundation and will feature drinks from local favorites like Avenue Club, The Nitty Gritty and Tangent, among others.

Set aside a mere $7 and treat yourself to a set featuring two of the 608’s best alt-rock bands. Bobby Hussy’s synth-slingers Cave Curse project will celebrate the release of a new 7-inch, while rising shoegazers Wash will co-headline (and add further proof of their status as one of Madison’s most exciting new bands). Additional support comes from Genau and Tarek Sabbar.